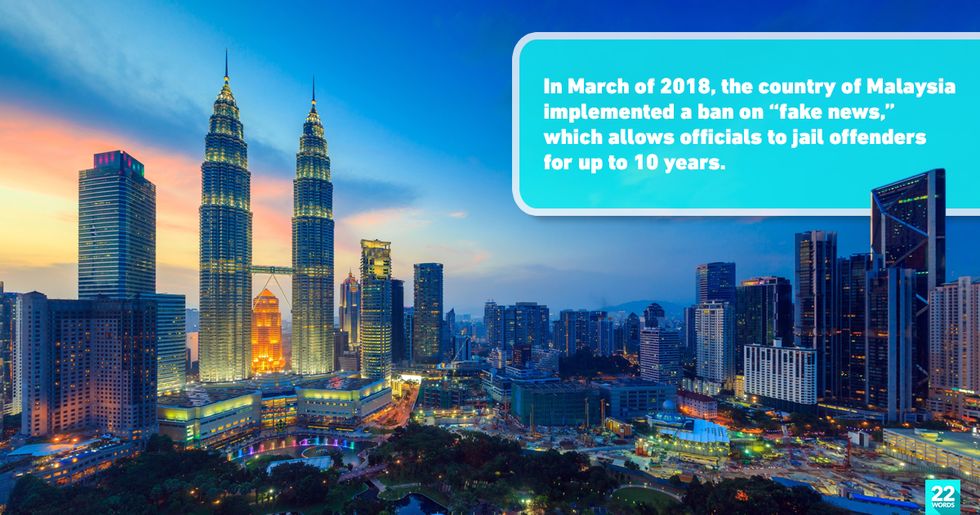 If you're struggling to keep up with the news these days, let me give you the CliffsNotes version: It's pretty bad out there.

Sure, there are plenty of things happening that can renew your faith in humanity, but on the flip side, there's also plenty of stuff that kind of makes you wonder exactly how long humans will even be around, what with all the scandals.


Things seem to be going to hell in a handbasket. And just in case you think you're doing a good job of keeping up with all the bad news in the world, here are 9 scandals that you might not realize have been going on in the world today.

I know what you're thinking. You know all about this Flint water crisis. The citizens of Flint, Michigan have been unable to drink the water from their taps since 2014 (can you believe it's been that long?!), when the city decided to switch it water source from Lake Huron and the Detroit River to the Flint River. The people were exposed to dangerous levels of lead and have been using bottled water ever since. Here's the part you probably don't know:

On April 6, 2018, the state of Michigan announced it would no longer be providing free bottled water to the residents of Flint. The pipes that are the cause of the dangerous lead levels won't be completely replaced until 2020 at the earliest. Until then, people who don't want to drink the water (which should be everyone) are on the hook for buying their own bottled water.

Remember when people were super fired up about the Dakota Access Pipeline? Thousands of water protectors gathered at the Standing Rock Indian Reservation to protest the building of a pipeline that would put their land and water supply in danger of being contaminated with oil in the event of a spill. Well, as it turns out, there was a reason for that.

The Keystone Pipeline is another pipeline that carries oil between Canada and the U.S. And guess what. It leaked. A lot. Starting on November 16, 2017, the Keystone Pipeline began leaking oil into the ground in South Dakota. In fact, the leak was nearly double the size of what was originally reported. But don't worry. Not all the latest scandals are taking place in America. This next one is in China, and it's pretty terrifying...

China will be rolling out a scoring system for its citizens. The government plans to score citizens based on their financial, social, political, and legal credit ratings. Your score goes down if you default on a loan or share your negative opinion of the government online. Not only that, but if you're friends with someone who has a low score, your own score could be negatively affected. Your score determines what sort of job you can apply for, where you can send your kid to school, and whether you're allowed to purchase flights. Oh, and it's mandatory for all citizens.
I know what you're thinking. That sounds like something out of an episode of Black Mirror, right? It literally is. And in case you weren't sure, that episode did not end well.

4. Sexual Assault Within the Mormon Church

On March 19, 2018, the media organization Mormon Leaks released a tape of former Missionary Training Center (MTC) President James L. Bishop admitting to molesting women at the MTC. He had a private room in the basement of the building where he'd bring them and then assault them.

That's bad enough, but what's even worse is the fact that his behavior was reported to the church leadership years ago. They were aware of his actions, but no disciplinary action was taken until after Mormon Leaks published the tape. The church covered up the crime — and, in fact, has done so on several occasions, not just with Bishop. Now, McKenna Denson (pictured above) is suing the LDS for not taking action after she had repeatedly reported that Bishop sexually assaulted her.

Howard University is a private school located in Washington, D.C. In late March of 2018, it was revealed that workers in the school's financial aid office had been stealing financial aid funds for themselves. They awarded themselves tuition benefits and even awarded themselves grants. Here's a video of the students after they found out, reacting in the best way ever...

Let us all take a minute to take notes on how the students at Howard University ran down on the administrative offi… https://t.co/MnQQthVtvW
— Linds💋 (@Linds💋)1522433581.0

Students of Howard University went to the administration office and started singing "B*tch Better Have My Money" by Rihanna. Is that not pretty much the greatest thing you've ever seen?

The students also staged a sit-in which lasted for nine days before finally reaching an agreement with school officials. In addition to protesting the misappropriation of financial aid money, the students also demanded an overhaul of the school's sexual harassment policy, the creation of a food bank, a freeze on tuition rates, and a review of the policy that allows campus police to carry weapons. In other words, they're getting stuff done.

Many people are quick to show that they support the troops, but when it comes to supporting veterans, it's a completely different story. In March of 2018, a study of VA hospitals finally came to a close. Its findings were pretty horrific.

As it turns out, the Office of Veteran Affairs has been reporting fake statistics for the last 20 years. Thousands of veterans have died after being put on fake waiting lists.

If you're a fan of soccer (or football), you probably know that the 2022 FIFA World Cup is scheduled to be held in the country of Qatar. This is actually pretty horrible for several reasons, but there's one detail that makes it horrific...

Qatar is using slaves to build its stadiums. Actual, human slaves. They've hired people from other countries under false pretenses, then stolen their passports as soon as they arrive in the country. Hundreds of migrant workers have died in the middle of construction.

This is another one you might be somewhat aware of, but you don't see a lot of info about Venezuela in mainstream media outlets. Venezuela's economy has been largely dependent on the export of oil. However, in 2013, the price of oil began to decline rapidly.

As a response to this, the (corrupt) Venezuelan government essentially began printing money, making the Venezuelan currency (the Bolivar) almost completely worthless. As a result, Venezuela — the country with the world's largest oil reserves — is filled with people who can't afford food or medicine.

Malaysia's political climate has become more and complicated over the past few years. In March of 2018, the country implemented a ban on "fake news," which allows officials to jail offenders for up to 10 years.

It's thought this "fake news" ban was implemented in order to keep journalists from reporting on a huge scandal that's rocked Malaysia since early 2015 involving the former prime minister Najib Razak. Now, the 92-year-old Razak has come out of retirement to seek another term in office.