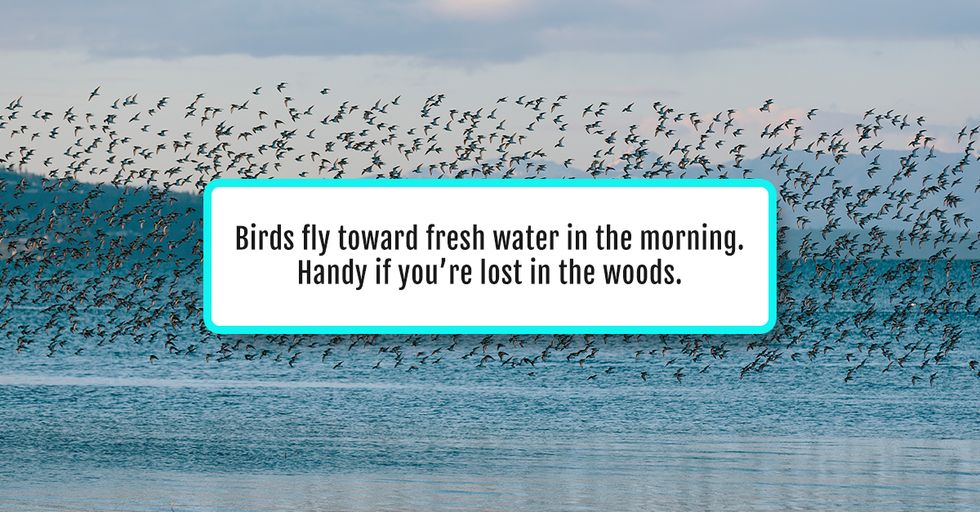 Let's face it, most modern people aren't equipped for survival.

Sure, there are the few hardcore survivalists here and there, but for the most part, the rest of the population wouldn't know how to survive an apocalypse if it hit them in the face.

There are a few tips, however, that everyone should know. Here are the most pertinent ones.

At least, that's according to Reddit user EllaMorris, who warns that "other materials will still keep you warm if they get wet (especially wool or synthetic fleece), but cotton will just give you hypothermia."
Good to know, especially when our long-awaited camping trip in the middle of nowhere comes up. No cotton for us – at least as long as we're away from civilization.

When it comes to survival, that is. Reddit user Dufaso69 explains that "polyester is one of the best survival materials[,] at least for a lower layer. It wicks out your sweat, keeping you dry and is also thin so you don’t get super T H I C C from all your layers."
More to the point, bigwillyb123 adds, "one tight poly layer, one loose wool layer, and one heavy jacket will get you through most cold weather situations." Good to know.

Art3sian explains, "a plastic bag tied around pretty much any foliage and left for a while will produce drinkable water."
Don't understand how? Let's go back to basic high school biology. This process is called transpiration, and basically, it's evaporation of water from plant leaves. Don't do this with poisonous leaves, though.

Reddit user airwalkerdnbmusic, who perhaps was a boy scout in a former life explains the process, which is surprisingly cut and dry. *Get it? Cut and– Meh, never mind.
He says,

You can build a shelter in a forest in less than an hour. Look for large, freshly fallen branches. You need three, a long one about 2 meters in length and two shorter ones, the same length, about a meter or so. Take the two shorter ones first. Drive them into the soft earth so they form an "X" shape, with one overlapping the other. Now, find some long, thin sapling branches. Make sure they are fresh and not fallen as they will have begun to rot and you need them still flexible. Use it as a rope, strip the leaves from it, and tie the X frame at the top where the two logs join, as tight as you can. Repeat this until you are sure it's solid. Now take your long branch and lay it lengthways on top of the X frame, essentially making a triangular shelter. This is known as the "A" frame and its very easy to make. To finish, grab as many branches and lean it against the structure either side to make a sloping roof. This keeps the rain off and will protect you from the wind and cold. Once your inside, cover yourself with leaf litter, taking care to remove any insects and get some shut eye. As a last resort, it's a great shelter and will keep you warm even during the depths of winter.

Redditer Zenonira has something to add to the shelter conversation. She says,

One of the biggest sappers of heat will be the ground. If you wish to sleep in a shelter, you MUST insulate against the ground if you wish to survive. Several layers of leaves, with plenty of air in between, will significantly slow the energy loss to the ground.

Good to know, especially considering what user iSkateiPod had to add:

The ground is by far the coldest thing I've ever slept on in my entire life. During an FTX I decided it would be a good idea to just sleep on the ground and keep my ruck packed since we wouldn't be getting much sleep. The temperature dropped about 20 degrees and I woke up shivering on my knees and elbows frozen as all hell.

6. How to ride out a riptide

If you're caught in a rip current, swim parallel to the shore, or at least on a diagonal towards it, rather than trying to swim directly against the rip current. If you get tired, let your body rest and ride the current out, eventually it will dissipate and you'll be able to swim back towards shore. Fighting against it is going to tire you out fast and you're much more likely to drown. Swimming parallel/diagonal to shore (rather than directly towards shore against the current) will keep you within sight, as well as eventually get you out of the current's pull.

If you don't understand based on the explanation, wikihow has published a very helpful diagram. You can find it here.

Stateofyou says, "keep a blanket and water in the car." Why? Because you might need them one day – simple as that.
Saxon-Landshark adds "preferably demineralized water so it can be used in the radiator too. Never when the radiator is still hot though." Yup.

MONSTER-LOAD says, "birds fly toward fresh water in the morning." Handy if you're lost in the woods.
User Jason Blanche goes one further. He says,

9. What to do if you're lost in the wilderness

If you're lost in the wilderness and people know you're hiking etc, don't move from your location but if you have to then make signs which direction you're going. If you're sleeping outside on the ground you need to insulate yourself from the bare dirt. Pile up pine branches and stuff. You lose a lot of heat by conduction and radiation. Which is why you should have some kind of cover between the sky and yourself. Always keep your feet dry, take off your socks if they get wet. You'll lose more heat by convection if the fluid is water rather than air. Don't eat what you don't recognise.

10. What to do what you're attacked

TheGr34tGhastly says, "if you are grabbed from behind, go limp. Attackers are prepared to hold for a fight, not to catch a limp body. Once you noodle out of their grip, fight or flight." Sounds reasonable.

11. Tips from a professional

P-mon13 has this bit of wisdom to deliver,

Search and Rescue technician here. For SAR we do a lot of basic survival-type trainings. We do this because, as we are searching for people in remote environmentents, we too could end up in a survival situation. Here would be some of my personal recommendations for anyone wanting to go outside to anywhere remote. I would also like to add that this doesn't only necessarily apply to "remote" areas. In a previous thread I talked about how someone was lost (and remains so) only a mile and a half from a busy road. Without further ado: 1) Know how to orient yourself where you are going. Know which direction the closest rode, town, trail, etc is. This could mean bringing (and knowing how to use) a compass/map, or, if you are familiar with the area, navigatong by landmarks. I always download a topographic map of the area I will be in when I do something outdoors. There are great apps for this: I can personally recommend the pro version of US Topo Maps on the Android store. Self-rescue is your best chance of getting yourself out of a sticky situation. Keep in mind all the things that need to happen for you to be rescued should something happen: Friends family need to recognize you have gone too long (by which time you could have been lost for a day or more), authorities need to be notified, responders such as myself need to show upon scene, then based on how much information you gave to friends/family about what you were doing, SAR crews may need to search literally hundreds of acres of land, water, cliffs, thickets, brush, fields... You name it. This can take a long time. That leads nicely into 2... 2) Probably as important or more important than (1) is notifying friends and family where you will be going and what you will be doing. If you don't do that then... From a SAR standpoint... Your kinda SOL. 3)Know how to protect yourself from simple environmental hazards such as rain, cold weather, hot weather, sun... Something as simple as a plastic leaf bag can be used as a rain shelter to squat in an keep you warm. If you've never tried this, go outside on a cold night without a jacket on. Bring a leaf bag, put it over your body and squat down. Be amazed (and warm and dry). 4)Know your priorities. Fire and food are not priorities but rather amenities. You can go weeks without food. Only days without water. Less than a night if you are soaking wet and freezing. Often overlooked it what we call a "positive mental attitude". If you loose the will to survive, that's when things are bad. Often PMA is considered the first priority of survival. Once again... On mobile.