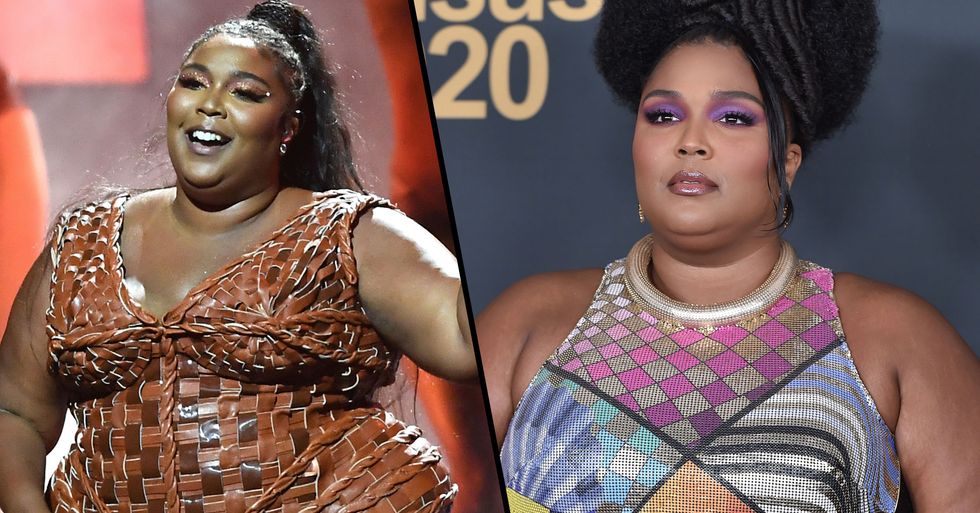 Chart-topping sensation Lizzo left little to the imagination in a lingerie-clad selfie this week.

She's been making music for a long time (her debut album came out in 2013) but she's only become a radio sensation in the last few years.

But it's not just the brilliant music that she makes that has garnered Lizzo such a legion of fans. Click Next to find out Lizzo's less well-known talent...

It's got to be Lizzo's incredible message. Her lyrics are designed to inspire self-love and confidence, particularly in young women. In a world of problematic messages, she's a real force for good. So what does the internet think? Read more to find out.

Last June, Lizzo stormed the stage at the BET Awards.

She performed her hit single "Truth Hurts," wearing a leotard-wedding-dress and blew the collective minds of the entire audience. But wait until you hear what prop she emerged from during the performance...

Lizzo then proceeded to remove her veil and gown, dance like no one was watching, and even include an impressively intricate flue solo. In conclusion, we have no choice but to stan.

There was one audience member at the BET Awards who was truly losing her mind over Lizzo's performance - a certain Rihanna. But her next performance turned even more heads. It incorporated an ahem, certain body part...

She also performed at the MTV Video Music Awards - and, again, blew the internet's collective mind.

For one thing, the stage was decorated with a giant inflatable booty.

And, to finish, also managed to preach a message of self-love to the eagerly awaiting audience. Keep reading to hear what major celebrity is a huge fan of hers...

At the VMAs, the audience was pretty much all going wild for Lizzo - including Queen Latifah.

In one NSFW Instagram message, Lizzo claims that Rihanna "said I f**ked the stage like it was my side b***h. Don't get mad, Rihanna. I am not trying to blow up your spot, but that was a hard a** line! I might take that line." Phew! I'm a little hot under the collar from that one! But keep reading to hear which even more famous and well-known man absolutely loves Lizzo...

Understandably, Lizzo was blown away.

Oddly enough, she had tweeted earlier in the day about her love for Obama. Sometimes the universe really seems to work in mysterious ways. So what's next for Lizzo?

It seems that there's no end in sight to Lizzo's reign.

As you'd probably expect, Jay-Z's wife and collaborator, Beyonce was in attendance at the festival. She also performed, but the biggest moment of the night took place backstage...

Because some fans even captured a video of Beyonce grooving along to Lizzo's signature beats. Based on all these celebrity fans and accolades you'd think she'd reached the top, but there was another big announcement waiting on the horizon...

The star has been recognized for her trailblazing message of body positivity, advocacy for self-love, and her "relentlessly positive and impossibly catchy" sound. Wait until you hear what she had to say about bodies and confidence...

“I’ve been doing positive music for a long-ass time. Then the culture changed. There were a lot of things that weren’t popular but existed, like body positivity, which at first was a form of protest for fat bodies and black women and has now become a trendy, commercialized thing. Now I’ve seen it reach the mainstream. Suddenly I’m mainstream! How could we have guessed something like this would happen when we’ve never seen anything like this before?" the songstress told TIME. So what about the lingerie selfie we mentioned earlier? Well...

Another reason the world loves Lizzo?

She proves confidence is key.

And she's not afraid to rock some risque pieces. Check out what she shared during quarantine. It's a little bit scandalous...

Over quarantine she's been sharing the self-love.

But her latest thirst trap might be the most risque yet!

She posted an Instagram story while dancing in her underwear.

Now that's a quarantine mood. That wasn't all, though...

"Put on some cute panties today and smack ur own a**," she said.

She truly is the queen of self-love. Yes, Lizzo!