Lizzo Wore the World's Tiniest Handbag to the AMAs | 22 Words 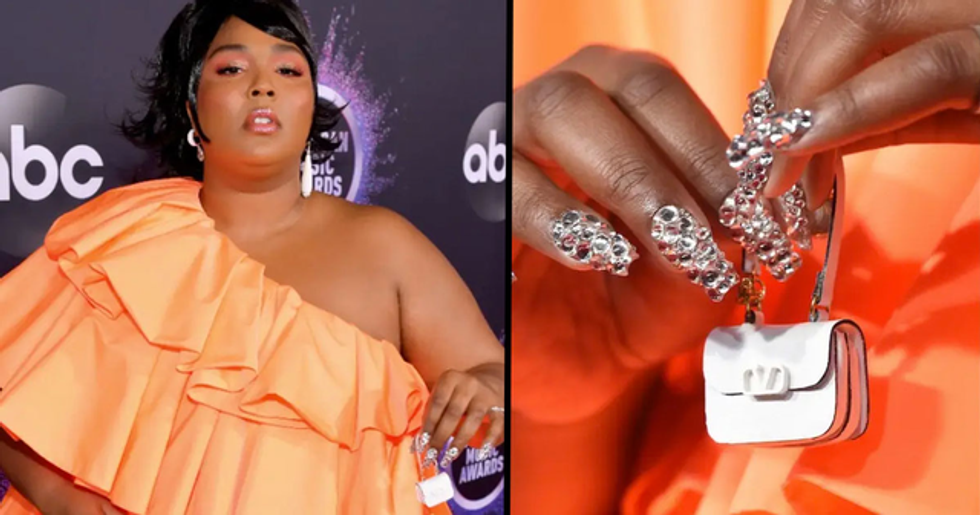 Lizzo Wore the World's Tiniest Handbag to the AMAs

The AMAs red carpet is always a great place to see celebrity outfits, both great and terrible. The fun atmosphere of the awards ceremony means stars tend to get a bit more experimental in their style - with some successful, and some (unintentionally) hilarious results.

And one star truly stole the show this year. Lizzo rocked an incredible layered orange mini-dress - but it was her statement accessory that really captured the internet's attention. And obviously her response to questions about it were similarly iconic.

But first, let's do a rundown of the very best dressed red carpet looks. Some truly have to be seen to be believed.

Looking very saintly in a floor-length white cape by Thom Browne and an incredible headdress by Stephen Jones Millinery.

This pink Miu Miu gown is a little basic, but there's no denying she looks stunning.

If this was a dress, it might be a little too dull - but the fact it's a catsuit totally elevates the look.

The epitome of "shouldn't work, but it does."

Our only double appearance on the list has to go to this stunning oversized royal blue suit.

This chartreuse satin bandage dress does look great on her - though we do wish it fit just a little better.

This Dior gown is the perfect blend of gothic and princessy.

The star stepped outside the box in this Rodarte gown. We particularly love her bejeweled hairline.

This is honestly one of the most beautiful looks we've ever seen.

You've got to respect a man who knows his personal style.

He sure knows how to stop basics being boring.

This snakeskin ballgown is the perfect blend of high class and trash.

Simple (and perhaps a tiny bit boring) but undeniably effective.

Props to the Disney Channel star for thinking outside the box!

The power suit is simple, but the subtle print adds a layer of interest.

Sure, we wouldn't wear this - but it's perfect for Paula Abdul's inner showgirl.

The iridescent orange fabric appeals to our inner magpie.

The '60s negligee-dress wouldn't be out of a place in a Bond film.

You can't go wrong with classic black - although carrying an acoustic guitar is kind of unacceptable. Loving the drawn-on mustache, though!

This simple black dress is elevated by her beautiful purple hairdo.

It's a little bit corny - but we can't help but like this turquoise velvet blazer.

How does this man pull off such objectively ugly outfits?

The long power braid makes it.

You wouldn't expect anything less than full glamour from this ballet star, right?

Matching his sneakers to his coat is a truly ingenious touch.

Although honestly, she could rock up in a paper bag and still make the list.

Love him or hate him, you can't ever accuse Starr of not making the effort.

Proving that suits don't have to just be for the boys.

This faded floral print is pretty without being too over-the-top.

Because really, silver draped gowns with cut-out cleavages are what the AMAs are all about.

We're loving this slightly cartoony take on the classic suit.

The spangly golden-green layered dress was the perfect look for the undisputed star of the night.

The sweetheart of the 2019 music industry looked absolutely stunning in a ruffled orange minidress by Valentino.

But the singer kept her accessories minimal.

She rocked what must be the tiniest purse we've ever seen.

She highlighted its petite size by danging it from her fabulous fingernails.

The star told interviewers it's one of only 3 in the world.

Many questioned what she was carrying in her tiny bag.

But Lizzo was quick to clarify. "I got tampons in here, a flask of tequila, condoms," the 31-year-old laughed.

Many have praised her cute (and funny) choice.

The star also Instagrammed her incredible look, with a typically hilarious caption.

"Valentino bag big enough for my f***s to give," the singer joked. Just when you thought you couldn't love Lizzo more. And if you can't get enough of Lizzo (we know we can't), scroll on for a look at her first Vogue cover. It's everything you could dream of, and more.