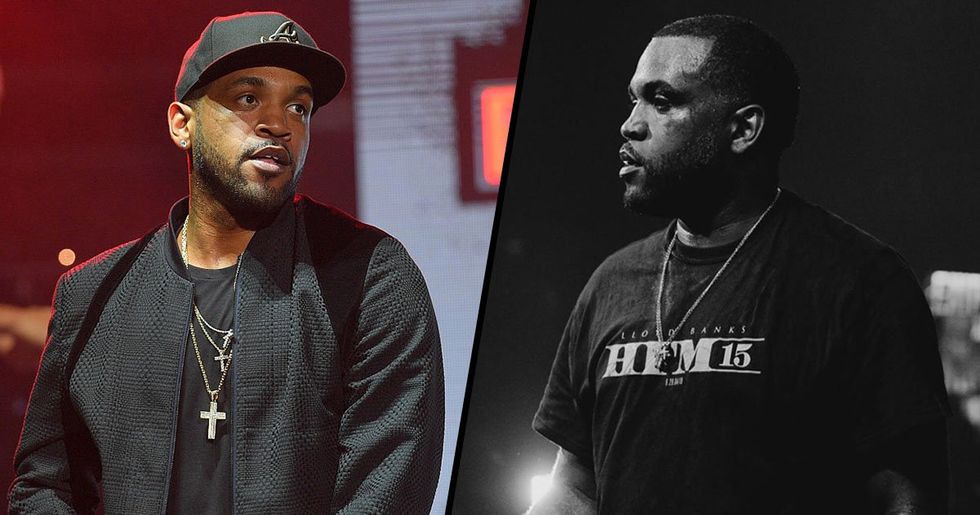 You may remember Lloyd Banks from his successful run as part of east-coast hip-hop group, G-Unit.

The group formed in 1999 and was made up of longtime friends, 50 Cent, Tony Yano, and Mr. Banks. The hip-hop collective has gone through a series of different members and all of the rappers have enjoyed solo careers respectively. Banks made waves of his own in 2004 with the release of his debut solo album, Hunger For More.

Banks left G-Unit officially in 2018 but it's not his departure from the group that has got fans worried. A series of cryptic tweets and one undeniably sad statement released by Banks on his Twitter page has got everyone thinking: what's up with Lloyd Banks?

Frankly, from what he's been posting recently, it seems as though the rapper is going through a tough time.

Either he's going through some sort of mid-life crisis, he's had his heart broken, or he's just feeling a bit sad. Whatever it is, his fans on Twitter have been rallying round to offer their support.

Lloyd Banks seems to be going through some inner crisis.

The rapper has certainly had some ups and downs in his life. Besides being a majorly successful recording artist, with his debut album reaching number one in the Billboard charts and going platinum in America and Canada, Banks has had some tougher days.

During the early days of G-Unit, Banks was shot in the near-fatal attack.

In September 2001, when leaving a nightclub in Queens, Banks was shot in the back and stomach. Lloyd reportedly ran all the way to the nearest hospital. He couldn't remember anything except waking up the next day in his hospital bed and watching the terror attacks of 9/11. Speaking to Vice, Banks recalled: "I woke up in the hospital watching the buildings fall down. I thought I was watching Independence Day or some shit."

The success of G-Unit ensued throughout the noughties.

Hosted by Jessica Simpson, the hip-hop group performed on the much-loved American skit show. This appearance on January 17th came at a troubling time for the act. Tony Yayo had spent all of 2013 in prison, after first being caught up with a weapon possession charge in 2002. 50 Cent was also in trouble for being found in possession of a handgun but it was only Yayo who served time after it was discovered that he was already under warrant and had skipped bail. Shortly after being released on January 8th, 2004, Yayo was back in the cells. The rapper was found to have a forged passport and was sent to federal prison.

Eminem showed his support for Tony Yayo during his 2003 Grammy Awards performance. The "Cleanin' Out My Closet" hitmaker displayed his views about Yayo's incarceration by wearing a "Free Yayo" t-shirt.

During Yayo's absence, he was replaced by Young Buck.

50-Cent recruited Young Buck to take Tony Yayo's place while he was in prison. Buck actually stayed with the group until 2008, however his departure was less than amicable...

50-Cent kicked Young Buck out of the group because of his behavior.

In 2008, 50-Cent announced that Young Buck was no longer going to be part of the G-Unit. After unexpectedly calling New York’s Hot 97 radio station, 50 Cent unleased a tirade about his ex-wife before declaring: "You can take this as an official notice right here – pretty much you can say: Young Buck is no longer in the group G-Unit." 50 Cent had made no secret of his less than harmonious relationship with Buck over recent months, so the fact that he had kicked him out wasn't that much of a shock.  Buck was rumored to have upset 50 Cent by "excessive spending" and "inconsistent behavior."

Young Buck wasn't the only member to get kicked out of G-Unit.

Jayceon Terrell Taylor, better known as The Game, became a member of the group around the same time as Buck. It was Dr. Dre and Jeremy Lovine that encouraged 50 Cent to add The Game to the line-up in late 2003. This was perhaps one of the worst working relationships ever. 50 Cent and The Game had a very public love-hate relationship. More hate than love, mind...

The Game's relationship with G-Unit sure was rocky. Rumors of the tension between 50 Cent and The Game became public knowledge when Taylor released his debut album, The Documentary (2005).  50 Cent was annoyed by the diss tracks and claimed that he deserved credit for at least five of the tracks. So what happened next? The Game showed up at Hot 97 radio studio, along with his entourage. 50 Cent was there with some of the G-Unit entourage and The Game's entourage took fire. Everyone got out unscathed but it sure wasn't friendly... The Game officially left the group in the summer of 2006.

Lloyd Banks didn't exactly keep away from the fighting.

Banks makes his tough-side interior pretty clear through his lyrics. If you thought that he wasn't one to get involved in drama, think again... he once rapped: "Even my father knows where the revolver goes… I’ll bring the beef to your front door like Dominoes." And if you still weren't sure whether Banks was up for a fight... how about when he rapped: "You violate, I’m sending you to God.. I’m no peacemaker, that’s my jeweler's job?"

At that time, there was no blood-loss between Banks and The Game.

When The Game publicly discussed his battle with depression and how he had previously attempted suicide, Banks made some unsettling comments. Speaking to SOHH about The Game's comments, Banks stated: "I heard he's going to terminate himself so good luck on that. I predicted that too. So, next time you in the dark and you think about blowing your noodles all over your nice little paint, just do it like Nike." Yeesh.

It seems like Banks has been suffering from depression himself over the past couple of years...

The thirty-seven-year-old rapper has been concerning fans with his less than positive outlook in recent times.

Not that life has been all bad since he left G-Unit...

Posting on his Instagram page, Banks revealed he had become a father to Christopher Lloyde III in March of this year.

Banks has also got a baby-girl.

Lloyd Banks had his firstborn, a baby girl called Christina Ryann Lloyde, in the December of 2016. This was also the period that it was reported that Banks and the other member of G-Unit had made up with The Game. Perhaps fatherhood persuaded Banks to turn over a new leaf?

The Game has also embraced fatherhood.

From the really adorable photos that The Game posts on Instagram, it's clear where his priorities are at...

Lloyd Banks faced some losses over the last couple of years.

Banks posted a rather ominous post about his deceased father in March this year. The rapper not only expressed that he missed his pops, but he also suggested that he was struggling with life. He confessed: "wish I could tell you, u were right... cause u ain’t missing sh!t here."

The series of cryptic tweets...

At the end of August, Banks started worrying his fans by posting a serious of cryptic depressing tweets. I mean, "withdrawal..." what's that about?

Wanting to retreat from the public eye?

In one of the cryptic tweets, Banks seemed to be suggesting that he wished to withdraw from the public eye.

Lloyd Banks has been considerably more private in recent years.

The rapper has become notoriously private about his personal life. The identity of the mother to his two children remains a mystery to the public. It seems as though the rapper has learned of the benefits of keeping things private.

Remember when this happened?

Fans have been requesting new music from Banks.

This is what led to the seriously depressing tweet made by the rapper... in response to his fans asking for new music Banks said:

Nobody cares about Banks, really?

According to Lloyd Banks, there would be no point in him releasing new music because "ain’t nobody checking for banks anymore." Ouch.

Not if his fans have anything to say about it!

Thousands of Banks fans took to the post and insisted that they all genuinely were interested in what the rapper would make next.

The company seemed keen to make the rapper a deal that he wouldn't be able to refuse.

Some fans seemed genuinely annoyed that Lloyd Banks would even consider that people were not interested in him or his future projects. This guy thinks that Banks makes some of the "only respectable sh*t." Quite the statement, eh?

Twitter user, Carlos Beltran, had no idea why Banks was claiming that he was no longer popular. Beltran was confused because he had seen Banks play to a packed crowd not too long ago.

This photo was taken in 2017 and shows Banks perform to a packed crowd at "The Pool After Dark" event at Harrah's Resort in Atlantic City, New Jersey.

Fans are confident that Banks' legacy will carry.

The rapper's fans do not believe for a second that his work will be forgotten... even if Banks seems to think so.

Whatever he's going through...

His fans made it clear that they hear and appreciate Banks.

Banks has swiftly changed his tune.

Taking to Twitter to defend his previous tweets, Banks claimed that he was being "sarcastic." Riiiight...

Interacting with a fan, Banks seemed to make light of the situation. He insisted that he was just joking.

Hopefully, his fans could see the funny side.

Whether he was really joking or he is going through a rough time... we wish Lloyd Banks all the best.

The Hunger For More really is an excellent album.

And there's no doubt in my mind that Banks' legacy will on. Speaking of unsettled fans... Post Malone has divided his audiences with his decision to work alongside Black Sabbath legend, Ozzy Osbourne. Keep scrolling for the story...