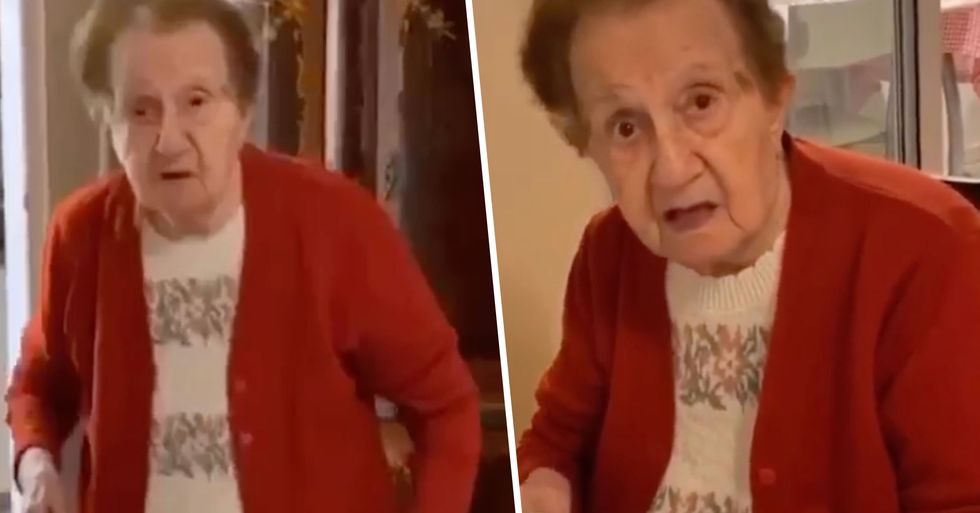 During one of the most destructive wars the world has ever witnessed, the persecution of the Jewish people reached a new vile level of callousness. World War II saw the Nazis invade countries only to turn them into concentration camps where they detained, tortured and murdered Jews as part of "The Final Solution."

This week, amid all the coronavirus panic, a Holocaust Survivor revealed some harrowing details of her survival which made people think about how irrelevant their complaints about quarantine are.

These stories prove that we should never forget.

Keep reading to see the video that moved us all to tears...

During World War II, our world witnessed a huge mass-murder.

Around 6 million Jewish people were mercilessly killed during the 1930s and 40s when Nazi Germany invaded many parts of Europe.

Nazi Germany was under a fierce dictatorship...

Under the German regime, anti-Semitic Nazi leader Adolf Hitler believed Jews were an inferior race - an alien threat to the purity of the German race - and he spread this message across his nation, eventually seeping it into the rest of Eastern Europe.

Hitler eventually reached, what was known as "The Final Solution."

After years of Nazi rule in Germany, during which the Jews were consistently persecuted, Hitler’s “Final Solution"- now known as the Holocaust - came to be as war infected almost every single country on the globe. While people were busy fighting against the regime, they failed to realize what was happening to the Jewish community.

The Nazis opened many concentration camps across Europe.

Each of the 23 main camps had subcamps, totaling to 900. These included camps with euphemistic names, such as “care facilities for foreign children," or "education centers."

Auschwitz was one of the biggest camps...

Located in Krakow, Poland, Auschwitz was established in 1940 and it was transformed into an extermination camp 2 years later. Here, prisoners were tortured, mutilated, and eventually murdered.

Auschwitz became the place of one of the biggest mass murders in human history.

Precise numbers are still debated, but according to the US Holocaust Memorial Museum, the German SS systematically killed at least 960,000 of the 1.1-1.3 million Jews deported to the camp.

These statistics don't include the murders of Jews in other camps.

On January 27th 1945, Soviet soldiers entered the gates of Auschwitz thus putting an end to the merciless murders of innocent Jewish people.

The only way to commemorate such a dreadful occasion is to remember their stories.

Seventy-five years after the horrific events that unfolded at Auschwitz, we honor the victims by remembering their resilience and their strength during such a tragedy.

Artists at FacesOfAuschwitz showed us a realistic portrayal of some of the prisoners.

Please remember them as you read through these heartbreaking stories, including the one that a survivor lived until this day to tell... Keep scrolling for the heartbreaking video.

"ÓZEFA GŁAZOWSKA was born on March 19th, 1930, in the village of Sitaniec, near Zamość. Along with her parents and a group of around 370 people, Józefa was expelled from her village on December 6th, 1942."

"She was deported to Auschwitz in a transport of 318 women and children."

"[She] arrived at the camp in the same transport as Czesława Kwoka. Józefa was a child victim of Aktion Zamość. On December 13th, 1932, Józefa was registered with the no. 26886 at Auschwitz. She was deported with her mother Marianna, who in February 1943, was selected within the camp and transferred to Block 25 (the block of death - the isolation station where people awaited to be killed)."

Both her parents were murdered in a gas chamber.

"Like many children during the Holocaust, Józefa became an orphan. In Auschwitz, Józefa went through pseudo-medical experiments – most likely causing her to be infected with malaria or typhus. Such experiments were conducted in many camps and on a wide scale, with prisoners being used as guinea pigs in the Nazis’ search for medical answers."

However, she managed to survive the ordeal.

"During the evacuation of Auschwitz in January 1945, Józefa Głazowska along with a group of children were transferred to the camp in Potulice, where she finally found freedom."

"VINZENT (Vinzenz) DANIEL was born on August 15, 1919, in the village of Smrčná in Czechoslovakia. After being arrested in Prague by the criminal police he was deported to Auschwitz on April 29, 1942."

"[He] was registered as a Czech, even though in fact he was of Roma origin. Vinzent (Vinzenz) Daniel was assigned to the Buna Kommando, which worked within the premises of the chemical plant constructed by the IG Farben (Interessen-Gemeinschaft Farbenindustrie AG) concern."

On May 27th, he escaped from his workplace.

"According to the account of the witnesses, the escapee ran across a field, then through the bottom of a drained pond and headed towards the nearby forest. Running, he took his striped uniform off and continued the escape only in underwear. His fate remains unknown."

"IWAN REBAŁKA was born on February 6, 1925, to Nastasja and, his father, Maksym Rybałka. At the time, the family lived in Syrowatka, Kreis Krasnopilla, Russland—an area which is now the sovereign territory of Ukraine."

"Iwan and 56 other individuals were deported to the concentration camp on August 20, 1942."

"Sadly, Iwan was not among those rescued."

"He died on 1 March 1943. His death certificate attributes the cause of death to a perinephric abscess, however, this information was, almost always, false. Iwan was actually murdered with a phenol injection into his heart: on 1 March 1943 Rapportführer Gerhard Palitzsch took at least 82 boys aged 13 to 17 from Birkenau to the main camp (Poles, Jews, and Russians)."

"DELIANA RADEMAKERS, born in 1923, was a Jehovah’s Witness, arrested while performing house-to-house ministry. After her initial incarceration in the occupied Netherlands, she was deported to Auschwitz via the Ravensbrück concentration camp."

"In a final letter to her family, she shared her hope for freedom 'before Psalm 18:5 [The ropes of the Grave surrounded me; The snares of death confronted me] could be fulfilled' Within Deliana's religious tradition, the capitalization of the word 'Grave' implies that she was referring to Hell, rather than her final resting place. Deliana's letter continued... saying, "go bravely onwards without fear, Jehovah is with us, what can (mere) people do to us?"

"The incomplete nature of the documentation and the various ways that prisoners were categorized makes it impossible to determine the exact number of Jehovah’s Witnesses in Auschwitz."

And finally, we have this grandmother, who lived to tell the true tale.

Recently, this Argentinian grandmother went viral after her granddaughter, who is a journalist, uploaded a video in which she details the horrific ordeal she survived during the Second World War. She said that this period on lockdown does not compare to what she and other Jewish people endured and it's true.

If you think you have it hard in quarantine, then have a think about this...

When asked about self-isolation and her journey, she said that she survived at the bottom of a well for 3 years. 3 years. In the caption, Ms. Connie Ansaldi said this: "[My grandmother went] Without bathing and almost no food. Can’t people spend two weeks at home? We talk a lot about what’s going on. She is not afraid for herself but for us. Let’s take care of our grandparents. Mine, everyone’s. Those who are vulnerable and those who are healthy who may be affected. Everything has a solution except death. This is a war and the enemy is invisible."

Be grateful if you and your family are healthy and safe. Stay home. Save lives. If you want to see more heartwarming content, then keep scrolling...