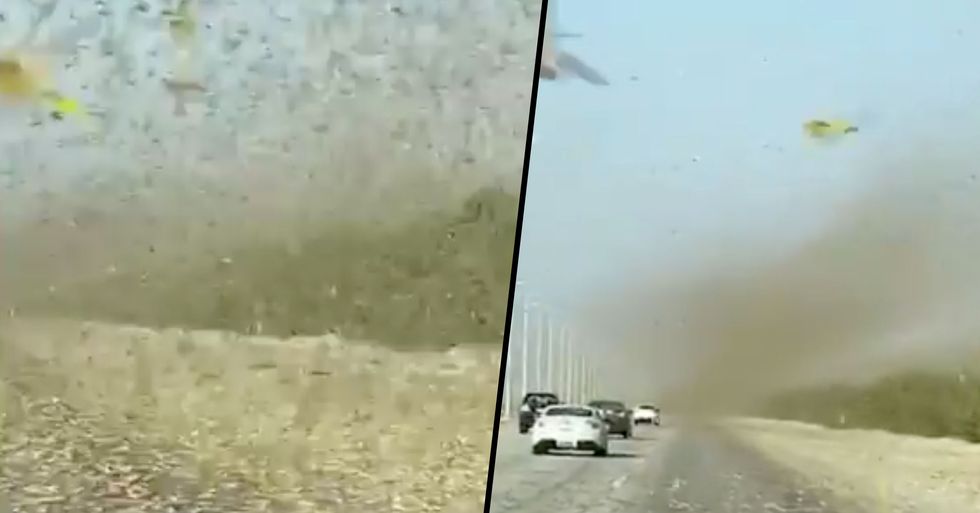 2020 seems to have some serious middle child issues, it's been throwing one thing after the other out the buggy, and we just can't keep up. To top it all off, the world is now infested with Locusts...

Currently, swarms of locusts have been causing havoc all over the world, and now a video has surfaced, showing the true extent of the infestation.

Keep scrolling for the horrifying video...

Maybe the Old Testament was on to something...

Just when we thought things couldn't get any worse, we now have locusts swarming the Middle East.

We are in the midst of a global pest crisis.

Locust plagues have currently taken over East Africa and South Asia. It's gotten so bad in some areas that national emergencies have been declared.

It started back in 2018 when we saw our climate change drastically.

Due to heavy rainfall across the Arabian Peninsula throughout 2018-19, it allowed "three generations of unprecedented breeding" within the locus species. Despite their life span only ranging from 3-5 months, the rate at which they're mating completely outweighs their deaths.

And according to experts, each female locust averages 158 children at a time.

And each one can breed a total of 3 times.

This meant that locust numbers rose to almost 200 billion this year.

And due to their immense numbers, they have started collecting in swarms, destroying crops and land which has, in turn, limited food sources for many countries.

This is a swarm of biblical proportions, some might say.

Scarily, it's becoming a more common occurrence in the Middle East, South Asia, and parts of eastern Africa... where the outbreak is so bad, it's threatening to cause famine.

The hardest hit of them all has been Somalia.

The country declared a national emergency while other African countries such as Ethiopia and Kenya are struggling to maintain their crops as the number of desert locusts steadily increases.

The swarm feast on crops, leaving a trail of destruction in its wake.

As the pandemic is still rife, food and health officials are worried the locusts could lead to people starving to death.

They are reportedly the worst they've been in decades.

Ravaging thousands of acres of crops in Yemen, Pakistan, and India. There seems to be no end to the torment.

The United Nations warned against the pests.

Desert locusts happen to be the most destructive breed and the UN reported that the swarms are so thick that they have become "blankets" of yellow and black, sometimes packed so densely that it is hard to see the ground.

And as the numbers continue to rise, the fear that this infestation may spread is looking likely.

According to Business Insider, the increase could grow approximately 500 times and travel across borders into thirty other countries before we reach June.

The damage has been very expensive.

Previously, in order to control the number of locusts it has cost a whopping $450 million and is set to rise as the battle continues.

The UN is currently seeking an extra $130 million from international donors.

But as the climate crisis continues to provide the pests with the perfect environment to produce more babies, it seems as though food shortages and the destruction of agricultural land will become more common.

Experts are looking for other methods to minimize them...

Pesticides were the first protocol, but they are very expensive and can have further detrimental effects on the environment.

And getting to the root of the problem is crucial.

Locusts, especially when they are in the "immature" stage, they can eat their own body weight in food which equals to meals for up to 35,000 people per day.

To get a better understanding of how horrific the situation is...

Officials reported a layer of dead locusts piled 6 inches high after the area was sprayed with pesticides.

I mean it's never a good time for a locust swarm.

But they could have at least waited for us to be pandemic free first.

A video has recently surfaced showing the extent of the damage...

The disturbing video shows just how badly the swarm is affecting visibility on the roads, bringing traffic to a standstill.

Let's hope this infestation is brought to rights or we'll all suffer the consequences.

And we all know what happened in the story of Moses and the locusts, right?

Check out the terrifying footage below...

I take back everything I said about 2019. If you're in the mood to read more about a different kind of pest, a more adorable one, then keep scrolling...