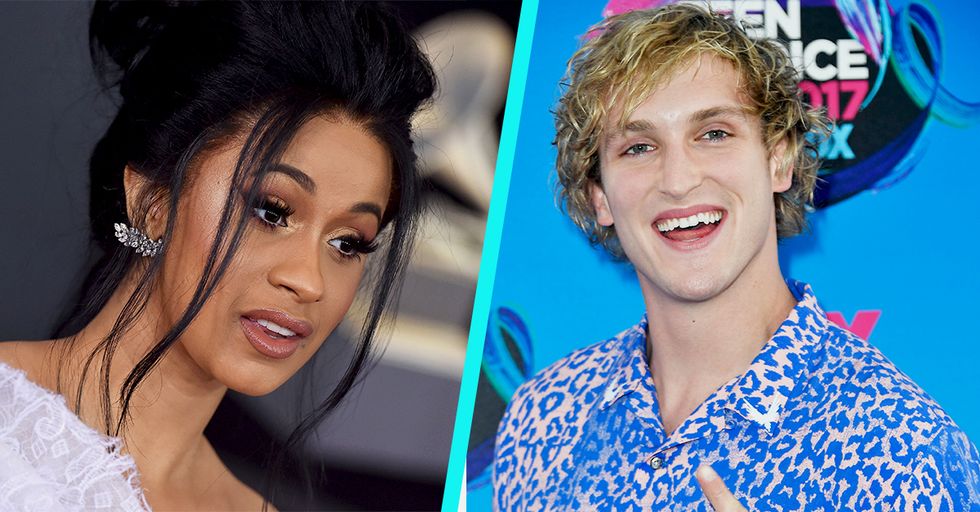 Another day, another massive eye-roll at Logan Paul. Seriously, does the guy know how to not be an idiot? Just when you think he can't get worse... he does.

Someone needs to take away his social media and put him in time-out.

Once again Paul is negatively in the headlines, but this time for posting a tone-deaf comment on Cardi B's Instagram. And let's be very clear: her fans are not happy.

Rapper Cardi B recently posted an Instagram from the Grammy Awards.

The picture is Cardi B on the red carpet, looking over her shoulder with the caption, "They trinna crucify me like they did Christ." She looks flawless like the incredible human being that she is. Full Cardi B stan over here.

Amidst the hundreds of comments from her adoring fans, one in particular stood out. It was from Logan Paul and it read, "lawlz u tellin me."

Oh, Logan. Is it possible to cringe so intensely that you give yourself a migraine? Because I'm pretty sure I just did. Here's the thing: Paul, despite his public "apology," has clearly learned nothing.

Remember that time he disgustingly uploaded a video to his YouTube channel of a man who had killed himself in a Japanese forest?

Yeah, it was pretty awful and inhumane. Since then, Paul has been dealing with backlash and trying to backtrack on his poor decisions.  Yet this comment proves that he really hasn't learned a thing.

I'm over here just shaking my head like, "REALLY?"

Instead of focusing on how to turn himself into a productive member of society, Paul is trolling Instagram and comparing himself to Christ. Yes, Logan Paul compared himself to Jesus Christ. Welcome to 2018, this is the world we live in.

If you're going to leave a comment on Cardi B's Instagram, you better be ready to feel the wrath of her fans if they don't like what you have to say. And trust me, none of them liked Pauls' "lawlz" post...

One person commented, "That's because you actually did something wrong." Another simply chimed in with, "SMH RN." Five letters that I agree with so much.

One user hilariously posted, "Girl shut up, no one likes you."

My favorite might be, "BOY IF YOU DON'T-". Others pointed out Paul's obvious victim complex. Someone needs to teach Paul the beauty of shutting up.

Paul recently went on "Good Morning America" to sit down for a one-on-one interview with host Michael Strahan.

He explained how even though the backlash against him for posting the horrifying video has been cruel, that he feels he deserves it. It's hard to believe he's being sincere when he feels as if the world is crucifying him.

"Yeah, you're a regular Jesus Christ. What a poor victim you are," one person wrote.

Cardi B's fans are not holding back. It's amazing how someone who is as dumb as Logan Paul can also be one of the most successful YouTube stars ever. He reportedly has made $14.3 million dollars in a year. A SINGLE YEAR.

Paul insists that what happened with the video, "happened for a reason."