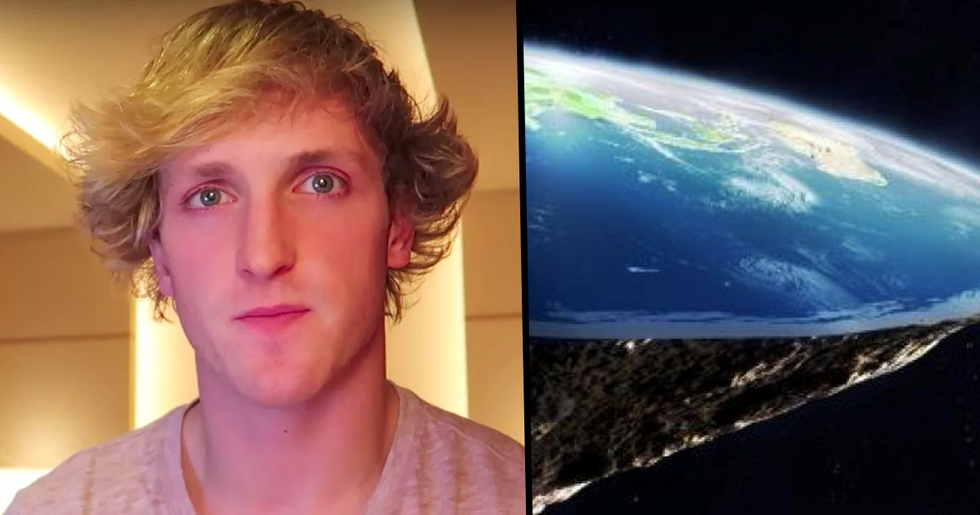 Internet personality, Logan Paul, is known for posting controversial videos on his YouTube channel, but no one could have predicted that he would announce that he was heading to Antartica to find the edge of the Earth.

And even more bizarre, he has made a 50-minute documentary filming his quest to seek the truth about whether the Earth is, indeed, flat or round as most (sane) people currently believe it to be.

It's a rollercoaster of a watch and will probably leave you feeling a little bit enlightened, slightly sad and definitely confused. Yes, mostly confused.

Fans of Logan Paul are loving it, but others aren't convinced.

We'll let you decide for yourselves.

But there are some things that he has done for fame that many found unforgivable.

The Youtuber has had his fair share of controversies within recent years. His channel seems to aim at stirring up controversy, actually. Logan's videos include radical stunts, distasteful jokes, and the charm of what one would call, "an entitled frat boy."

So are we really surprised by his next big project?

It's a fair question. The internet star has decided to make his mark on one of the world wildest conspiracy theories – the Flat Earth Theory. Because OF COURSE, he believes in this crazy kind of stuff.

His most recent project has him setting out to actually prove that the Earth is flat.

Logan is planning to visit Antartica to try to locate what "Flat Earthers" believe to be the edge of the Earth. On the expedition, he has said: 'I am that guy that will make it to the edge.'

FYI, "Flat Earthers" are people that believe that the Earth is flat.

Wonder how long it took them to come up with that clever name? Although, what do we expect from a bunch of people who truly believe this insane theory?

It is here he met the event's founder Robbie Davidson, and told him: 'I think I'm coming out of the Flat Earth closet.'

Although he did add that he wanted to discover the whole truth before coming out as a supporter of the movement.

He said; 'I am a man of truth.' Well, that's good because we are pretty sure that when you get to the Antarctic you will find that the Earth keeps going and that there is no mystical edge for you to fall off, Logan.

He also goes on to explain why he is skeptical that the Earth is round.

"The fact that we haven't been to the moon in over 50 years, the fact that the moon emits its own light." And, perhaps most importantly to him, the fact that several well-known scientists were unable to explain gravity.

Clearly, Sir Isaac Newton is not enough for this guy.

Newton, one of the most influential scientists of all time, was the man to discover gravity back in 1687 when he noticed an apple fall from a tree and land on the ground.

And Logan's not the only one planning a trip to the edge of the Earth.

Davidson, and a large group of his followers, are planning to take a cruise ship there in 2020. The irony of the fact that ships are able to navigate the sea on the premise that the Earth is indeed round, is clearly lost on them.

And we can now see what Logan really thinks about the shape of the Earth in his greatly anticipated new documentary.

Flat Earth: to the Edge and Back was released on Wednesday but it wasn't exactly the documentary that people were expecting.

In fact, the conclusion was the complete opposite of what people thought it would be.

Don't worry we won't spoil it for you yet. Let's first look at what went down during the whole 50-minute documentary, or "mockumentary" as people are now calling it.

Well, it's definitely not boring.

There is a love affair, an act of betrayal by a friend, and even a rap. Come on, you know you are getting excited now, it's just like a soap drama.

Mike tries to convince Logan that the Earth is flat by telling him that he saw the edge of the Earth when he was on vacation in Antarctica as a kid. He goes on to say that the world has been lying to us and the notion that the Earth is round is just a conspiracy theory.

His credibility is somewhat undermined a bit later on in the filming though.

When he visits Logan's home, he is caught on camera smashing up all of the globes that Logan has displayed. Slightly crazy? Completely insane? You decide.

Moving on in his quest for the truth, Logan decides to interview a group of children.

Giving credit to the education system, thankfully, the majority of the kids are adamant that the Earth is, indeed, round. However, there is one child that begs to differ, and this one, solitary child manages to convince our narrator that the Earth is not round, but flat. This kid should definitely be a politician when they grow up.

It is then on to the conference itself.

They meet a weird and wonderful selection of Flat Earthers including a rapper (why the hell not), a dude who has previously launched himself into the sky using a DIY rocket and an ex-employee of a company that builds satellites.

Although he does not spend long talking to any of these people as he quickly has his head turned by an Australian Flat Earther.

After only one date, she manages to completely convince Logan that the Earth is flat and even gets him to fall in love with her. Oh, the power that women have over men!

And then we get to our favorite bit.

The glorious flat Earth rap. Unfortunately, you will have to watch the whole documentary to see it but it looks a bit like this. And it includes these thought-provoking lyrics: 'Ever since my birth, my dick got mad girth. I'm chilling with my people talking 'bout that flat Earth. We can't make that sh*t up.

And he's not the first person to rap about the Earth being flat.

Check this dude out. 'Once you go flat, you ever go back.' LMAO.

Sadly, we are now coming to the end of the short film.

We now find ourselves at Logan's 'coming out' party. A chance for him to proudly declare himself a fully paid-up member of the Flat Earth Club.

But as with all good stories, an act of betrayal threatens to ruin his happy ending.

Former roommate, Mike, reveals that he is actually not a Flat Earther! Gasp!!!! Logan is left to question his entire belief system.

However, Logan then throws us another curveball by revealing that he thinks the notion of the Earth being flat is ludicrous... What?

'I think that is the dumbest shit I've heard in my life.' We think that's the smartest thing this dude has ever said in his entire life. But then he completely ruins it by saying he doesn't think that there is an Earth at all? WTF.

Which leaves us thinking...

Is Logan Paul a complete fool or a genius mockumentary maker?

He's not the only celebrity to question whether the Earth is actually round.

NBA superstar, Draymond Green, has also stated that he doesn't think the notion of the Earth being flat is a completely ridiculous idea. Thankfully, you don't need too much in the brain department to play great basketball.

And he's not the only NBA star with this controversial view.

Kyrie Irving is one of the most high profile supporters of the flat Earth theory. And he was the main reason that Draymond Green started to believe the theory!

Somewhat unsurprisingly, Kayne West has also spoken out about the theory.

Although he has not come out as a Flat Earther, he has spoken about the possibility that the Earth could be flat. Among his many other unique (read weird) beliefs.

He is so convinced that the Earth is flat that he set up a GoFundMe page to try to raise enough money to buy a satellite to send to space to prove it.

WWE superstar, AJ Styles, is known in the locker room for sharing his unusual theories.

A bona fide Flat Earther, AJ is clearly not the smartest tool in the box, but thankfully that doesn't affect his performance in the ring.

And last, but definitely not least, is the Internet sensation, Tila Tequila.

Now we are pretty sure that we can't trust a single word that comes out of this girl's mouth but she has previously said that the Earth must be flat as otherwise buildings would be tilted. We are speechless.