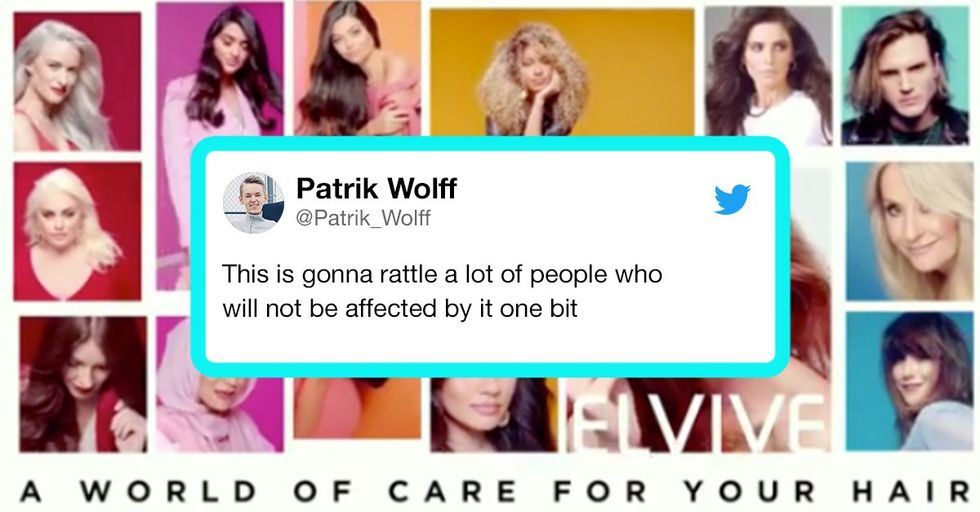 Inclusivity and representation in all areas of life is one prong of the women's movement that we're continuing to nurture. And L'Oréal just contributed to the effort in a big way.

It's about time that women who wear hijab are represented in pop culture. There will be a Barbie doll modeled after U.S. Olympic Fencer Ibtihaj Muhammad that will sport the culturally significant hair cover.

And now, L'Oréal has featured a gorgeous, hijab-wearing woman in an ad campaign for its new hair product.

Amena Khan is a British beauty blogger with nearly 600,000 followers on Instagram. Needless to say, she's kind of a big deal.

The woman is a force. She sells clothes and hijab through her company Pearl Daisy. She's a model, savvy businesswoman, and social media influencer who is practically taking over the world.

And now she's made history by being included in L'Oréal's new Elvive hair campaign.

“How many brands are doing things like this? Not many," Khan told Vogue UK. "They’re literally putting a girl in a headscarf — whose hair you can’t see — in a hair campaign. Because what they’re really valuing through the campaign is the voices that we have."

In the first video ad, Khan is featured along with other women who have "tricky" hair.

She wears a pale pink hijab and sits in front of a hot pink background. "Whether or not your hair is on display," she says, "doesn't affect how much you care about it." Khan told Vogue UK that even though she covers her hair in public, she removes her scarf when she's at home or around loved ones. Even if she didn't, that doesn't mean her hair isn't important to her.

You can watch the video here:

Khan told Vogue UK, "For me, my hair is an extension of my femininity... It's an expression of who I am. And even if that expression if for my home life and my loved ones and for me when I look in the mirror, it's who I am. If I know my hair is greasy but I have a scarf on it, I still feel rubbish all day — even if it's covered." And isn't that the only thing that matters? That a woman is able to feel whole and happy and herself no matter how she chooses to appear in public?

For Amena, the whole experience of the L'Oréal campaign was a joy, and she shared a video from the set:

"I arrived to a set that was beyond anything I could imagine," she wrote on Instagram. "The photographer was the legendary genius, @rankinarchive. A quiet, down to earth man, he was deliberate & thoughtful in every shot. I felt confident, unexpectedly calm & filled with gratitude." Not only is L'Oréal talking the talk, they're walking the walk. Obviously, there was an overwhelming reaction to a hijab-wearing woman being included in a hair campaign...

Most were absolutely ecstatic about the campaign.

It's obvious to most people that yes, even women who wear hijab care about their hair and like to take care of it. The simple act of including one of these women in an advertising campaign for a hair product shouldn't be a radical act.

But it still is. Muslim women are woefully underrepresented in pop culture and mainstream media.

It's time for this to change. Khan told Vogue UK, "I didn't start wearing a headscarf until I was in my twenties, but even prior to that I didn't see anyone I could relate to in the media."

"It was always a cause of celebration when you saw a brown face on television!" she continued.

"I always wanted to be somehow in television or in media but it felt like a pipe dream and that's why I didn't pursue it, because I didn't think there would be anything for me. Which is a shame. I think seeing this campaign like this would have given me more of a sense of belonging. I trusted L'Oréal that they would communicate the message well. If the message is authentic and the voice behind it is authentic, you can't deny what's being said."

Of course, the campaign has its detractors:

This Twitter user continued, "I agree, hijab wearers have needs and in most cases take better care of their hair, but I think the ad is trying to put out a statement, not selling a product." ...Uh, yeah. And what's wrong with that? It's time to stop being culturally insensitive and exclusive in order to sell shampoo.

L'Oréal's inclusion of Amena Khan in their campaign has definitely made a splash, as it should have.

The amount of support has been overwhelming 😫💓 From the bottom of my heart, thank you to everyone who has sent even… https://t.co/cnZOLJOKyH
— Amena (@Amena)1516313634.0

It's going to be a great day when the representation of women in hijab, of all different shapes, sizes, races, and abilities is no longer news worthy of an article. But until then, we will celebrate small steps in the right direction.