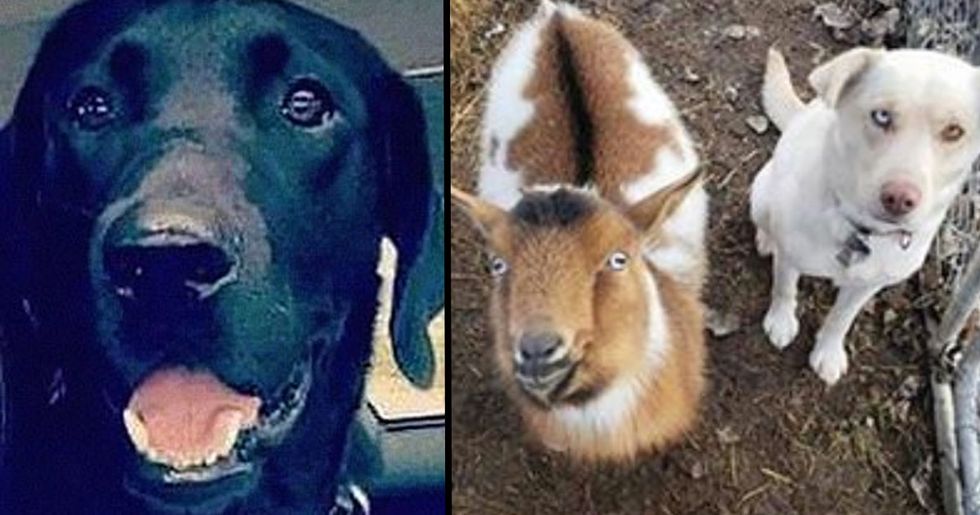 The saying goes that a dog is a man’s best friend, and often this is true. Dogs often prove to be some of the most loyal and dedicated pets you can have. They will play with you, they will comfort you and, in some extreme cases, they can even protect you from danger. So losing a dog can be hard, especially when they go missing without a trace, leaving you desperate to find them and assure yourself of their safety. So you can imagine this family’s delight to not only find their missing pet, but also discover that he has brought with him another canine friend and… well, a goat.

A normal modern day family who reside in Concordia, Kansas.

And meet their dog, Bo.

And they absolutely adore him!

Safe to say, Bo has a wonderful life with his beautiful family.

But sometimes a dog needs more.

It seems that Bo felt trapped, and that he needed to see more of the great wide world.

He also needed the bathroom.

Yes, Bo’s sudden disappearance was actually due to him needing to go the bathroom.

Luckily, his owner was happy to help.

Seeing that her dog needed to go urgently, Laura Krier, let Bo outside.

But he never came back.

However, Bo never came back.

And of course, his family was downhearted.

Upon hearing that his beloved friend had disappeared, Kyle Krier began his search.

And he had a lead (but not the dog kind).

Kyle’s wife told him that another dog had been in the backyard with Bo, and that he refused to come in.

Kyle searched for Bo everywhere, but every time he came up with nothing.

This obviously upset him.

Talking about the experience Kyle said: 'We looked all over the place for him and could not find him. We decided to go home and wait for him to come back but he never did. I went out in the morning to look for him and found no sign of him anywhere.'

Kyle had started to give up hope.

Kyle had just begun to give hope, it seemed that he would never see his beloved Bo again.

So you can imagine what happened when he heard this.

Kyle was then very surprised to discover that his dog had been seen six miles away with another dog!

Yes, seems that Bo had made a friend.

And this friend was a golden Labrador.

But there was also another addition.

But it seemed that Bo had made friends with another animal.

And this time, it was a goat!

Yes, it seems that Bo doesn’t discriminate against non-canine animals, as he had also accepted a goat into his new posse.

'My wife got a call that someone  had just about hit a black lab, a white lab and a goat on the road. My wife called me and told me the news and I knew right away that was our dog. I left work right away. I saw the crew out in a cut bean field on the east side of the highway.'

The following video captures the beautiful moment when Kyle found his lost friend. He also gladly accepted Bo’s new gang and allowed all 3 to travel in his truck with him. Yes, even the goat!

Take a look for yourselves.

And it seems that they all got along with each other.

Strange, seeing as they had not been friends long.

But the friends did not stay together.

Although a perfect ending would have the new dog and goat adopted by the Krier family – it turns out they already have one.

Yes, the dog and goat have names!

A few days after the reunion, it was discovered that the dog and goat belonged to Kyle’s next door neighbours.

And they had been looking for their dog too.

Chris and Shawna Huggins had been searching for their dog and goat and were glad to find that they were safe.

They even told them their names.

Turns out that the dog and goat are called Ozzy and Libby and they are loved just as much by their family as Bo is by his.

And he really is loved.

As the whole family was overjoyed to have their beautiful boy back.

Even if he does hog the bed.

Let’s hope he keeps in contact with his new friends.

Because I’m sure Ozzy and Libby will want to hang out again soon.

Let’s just be happy that Bo is safe.

And that he has made some new friends to keep him company.

Except instead of a cat, it’s a goat.

Who knows what the trio will do next!

But I’m sure it will be fantastic.