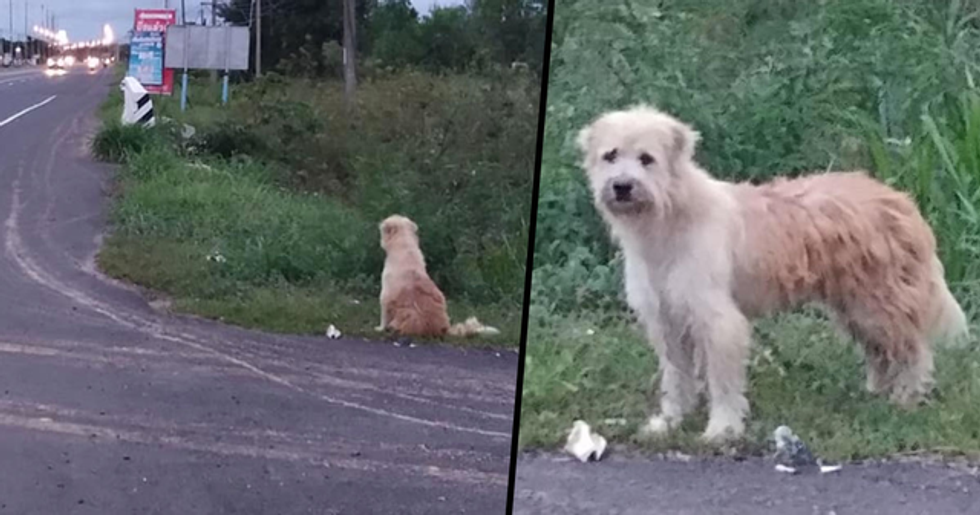 We all know dogs are incredibly loyal - but this story proves they may be more dedicated than we'd even expected. As if we needed to be convinced to love them any more!

One dog from Thailand was separated from his owners at the side of the road many years ago. Residents had spotted the faithful hound returning to the spot for many years - but weren't quite sure why.

One resident shared a video of the stray and was contacted by a family who had noticed a striking resemblance. And when they two made the connection, things finally took an upturn for the unlucky pooch.

There's one thing it seems we can all agree on - our canine pals are too good for this world.

While we're divided on political, social, and, hey, even celebrity issues, dogs tend to be the one thing we can all agree on.

But there is one thing to remember about a doggy pal.

These creatures tend to be loyal almost to a fault - and can get pretty neurotic if separated from their master.

But it can happen scarily easily.

And for many doggy parents, saying goodbye to their best pal is the worst thing they can imagine.

And if your dog wanders off...

Trying to track them down is likely the first priority on your mind.

This week, one dog has been getting a lot of attention.

Images of a certain hound were posted online - and his story is kind of unbelievable.

Our story takes place in the Mueang District of Thailand.

Residents of the area knew the dog, and believed it was likely a stray.

But they also had some unanswered questions.

They noticed the dog (whom they nicknamed Leo) would return to the same spot near consistently.

Although some had certain suspicions.

They thought it almost seemed as though the dog was visiting the area on purpose - or even waiting for something.

The mystery dog appeared to have a skin condition and was pretty underweight - but residents noticed it was still a pretty adorable pooch.

One resident took pity on the dog.

In an act of kindness, local Saowalak Pinnuchawet tried to take the dog home to feed and care for him.

But the dog had other ideas.

He soon ran away in the hopes of getting back to his old waiting spot. Not wanting to five up on the hound, Pinnuchawet started taking food to him, rather than force him to leave the area.

But images of the dog soon found their way online.

And the story of this mysterious waiting dog took the internet by storm. Who was he - and who was he waiting for?

The videos and photos fell into the right hands. A family who spotted the images contacted the poster to say the dog looked remarkably like their lost pet BonBon.

The family had lost their dog years earlier.

During a trip to visit relatives, BonBon had jumped out of the car at a gas station. The family had searched for the dog, but to no avail.

The family was understandably delighted.

And they set off to see if their pooch had missed them as much as they had him.

And, lo and behold!

The dog immediately knew its family, and responded with a wag of their tail.

But, when the family tried to take the dog home ...

The dog actually didn't fancy it. It seemed although he was happy to see his old pals, he'd gotten used to his new "home."

So the family came to a compromise.

They took the dog to the vets to check his health, then decided to allow the dog to choose where he lived. Pinnuchawet offered to continue feeding the dog, with the original family stopping by more frequently to maintain a relationship.

We love a successful co-parenting story!

And for more cute doggy content, scroll on for the maternity photoshoot which has the whole internet talking.