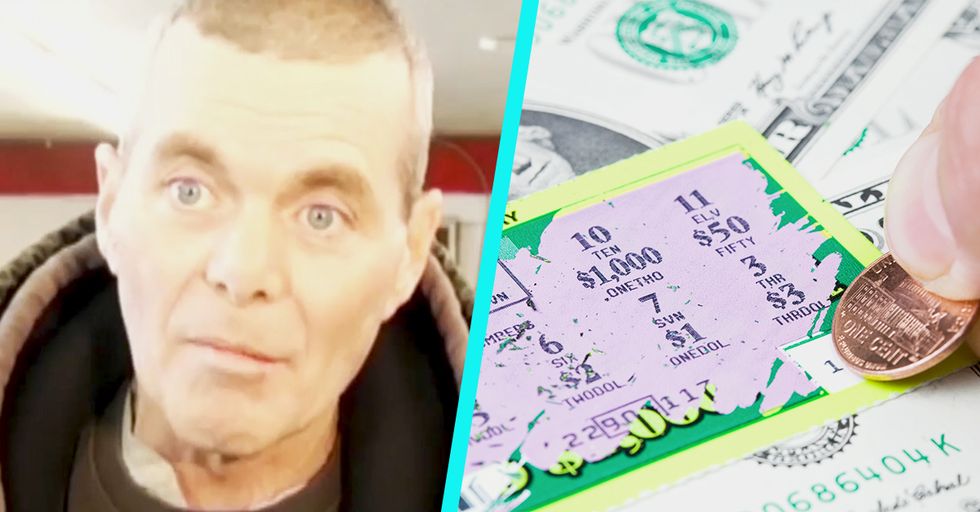 Donald Savastano was a hardworking American carpenter whose luck showed up a day late and a dollar short. Unable to afford health insurance, it took winning one million dollars in the New York State Lottery for Savastano to afford a visit to the doctor's office. Unfortunately, it was too late. Donald Savastano passed away from stage 4 cancer 23 days after claiming his lottery winnings. His tragic story gives a name and face to the millions of Americans whose dreams and lives are cut short by a broken healthcare system.

Savastano was the essence of an American. As a child, he learned his craft of carpentry from his father, with whom he was very close. After putting in time on commercial projects and paying his dues in the union, Donald was able to become self-employed. For the past decade, Savastano lived in Sidney, New York, with his beloved girlfriend of twelve years, Julie, and her two sons, Alex and Casper, whom Donald helped raise.

He Believed in Doing Things Right

Nearly half of American veterans who need mental health care don't receive it and more than half of those who would… https://t.co/geGReioKI2
— CNN (@CNN)1517513707.0

The hardworking carpenter from Queens, New York, prided himself in his high-quality work and his attention to detail. Donald’s family writes, “He always tried to reach out and help those he could by teaching them ‘the right way to do things."

The American Dream is Not Always a Two-Way Street

However, as so many of us know, doing things the ‘right way,’ does not necessarily equate to one being treated right by life, by circumstance, or by one’s country. Unfortunately, this was the case for Donald Savastano. His hard work and dedication to the American dream were ultimately not reciprocated by the American healthcare system. After 51 years of working hard and doing things the right way, Donald found himself not feeling well yet unable to afford a visit to the doctor.

The Lottery Winner Found One Million Reasons to Believe

So when Donald scratched off the tiny numbers on his “Merry Millionaire" lottery scratcher, he thought that he had just found one million reasons to believe that things were about to turn around for him; that doing things the right way counted for something in the grand scheme of things. Donald had won one million dollars in the New York State Lottery.

The Carpenter had Modest Plans and High Hopes

Unable to claim his prize until Monday, Donald told state lottery officials, “I couldn’t believe it! I kept it under wraps over the weekend, but I did take it out a few times to convince myself it was real." In true entrepreneurial fashion, Donald Savastano remained fiscally reasonable when it came time to collect his winnings. He didn’t plan on purchasing a Hummer and a mansion. He planned on being able to actually retire one day, and told lottery officials, "I'm probably going to go get a new truck and I don't know probably go on vacation."

No one has a greater interest in your health than you do. Should you have more control of it? https://t.co/4XtRkjYQSz
— The Economist (@The Economist)1517487921.0

“Being a self-employed carpenter, I didn’t really have a plan for retirement… “The money will help with that . . . I’ll buy a new truck, pay off some debt and invest for the future," he said in an interview with the Lottery. It was a future he believed to be long, prosperous, and filled with hope.

But most importantly, he was finally going to able to see a doctor,  a modest need that many believe should be an unalienable right in this country. But for Donald Savastano, it would take winning the lottery to get the medical attention he desperately needed for some time. "He didn't have insurance, he hadn't been feeling good for a while, I guess, and when he got the money he went into the doctor," Danielle Scott, a clerk at the store in which Savastano had purchased his winning scratcher, told ABC News.

It was Simply Too Little, Too Late

"This is going change our lives, to tell you the truth," Donald said as he retrieved his winnings. Little did Donald know that it would not; that it could not. It may have been one million dollars, an amount of money that most of us believe could change everything for us, but it was still too little, too late. With a new lease on life and a lump sum of $661,800 in the bank, Donald learned that he had stage 4 brain and lung cancer.

High Hopes were Not Enough

"I was hoping that the money was maybe going to save his life," Scott told ABC News. She had hope for Donald Savastano. On December 9th, 2017, when Donald stopped at a gas station on his way home from work, I imagine he held onto the same hope we all do when we purchase a lottery ticket. It’s the same naive hope that leads us to believe that, if we just do things right and work hard in life, we will be taken care of and things will turn out alright. But that’s not the case for so many Americans, and sadly, it was not the case for Donald Savastano.

Their Time is in Our Hands

Danielle Scott told ABC News, “He was a good person. He deserved it. I just wish he had more time with it." While nothing can bring Donald Savastano back, we have the ability to prevent his tragic story from repeating indefinitely. It’s time to realize that healthcare is not a partisan issue; it’s not even a political one. It’s a human issue. It’s a human right. And while it may have been too late for Donald Savastano to change his fate, it’s still not too late for us to change ours.