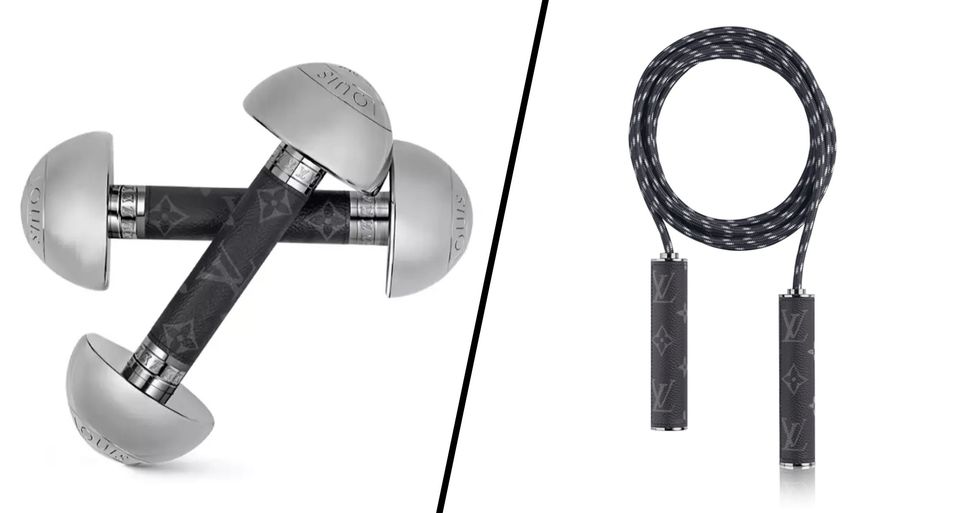 The iconic French fashion house, Louis Vuitton, has released $2,700 dumbbells and a $670 jump rope for an expensive quarantine work-out and people aren't impressed...

It turns out that working out is now very expensive....

All thanks to the infamous Louis Vuitton.

But firstly, let's be real for a minute...

To get fit, we must have a lot of motivation...

And juggling a work-out with the hectic schedules of day-to-day life isn't usually ideal.

Working out religiously isn't for everyone...

Working-out is a way of life.

And in the current climate...

The majority of gym-goers are now having to work out at home in their front rooms.

And home workouts can involve anything at a budget.

There are absolutely no excuses to easily maintain your fitness... especially on a budget.

But things such as dumbbells and jump ropes can be bought at very reasonable prices. Well, that's what we thought...

We all know Louis Vuitton for being an extremely stylish (and overpriced) French fashion house.

Many of us can only dream of having a wardrobe full of Louis Vuitton...

Because, as we are all more than aware, you need at least a couple of thousand dollars to be able to afford something with the famous LV brand on it.

But for the wealthy who regularly bathe in Louis Vuitton...

They can now work out in the utmost of style.

Coming in at a cool $2,720 these dumbbells will make us look our very best when working out from home. Totally worth it, right?

These are perhaps the most luxurious dumbbells we will ever witness...

"These Dumbbells have a striking aesthetic and sporty appeal," the description on the Louis Vuitton website reads. "They are an ideal gift for those who wish to exercise in style or elevate their home gym with exclusive Louis Vuitton details. Each weight, made from lustrous metal, is finished with an eye-catching Monogram Eclipse canvas handle and House signature engravings."

But if pumping iron isn't for you...

And a monogram volleyball...

Louis Vuitton also has a ping pong paddle set for sale for $2,280... which, FYI, doesn't include a ping pong table.

Of course, this new fitness range has got the entire internet talking...

And the majority of us are simply laughing over the fact that this range has been released during the pandemic... as if the millions of unemployed people can afford to buy overpriced gym gear.

It is pretty distasteful to offer something so ridiculously expensive during this difficult time...

And we aren't the only ones thinking that.

So unless you're a multi-millionaire...

Louis Vuitton dumbbells and a jump rope aren't exactly on your wish list.

But the important thing is...

These luxury items aren't at all essentials during this deadly pandemic and they certainly shouldn't be perceived as this.

And remember to prioritize essentials only. Make sure to keep scrolling to check out the hilariously bad haircuts that people are giving themselves during lockdown...