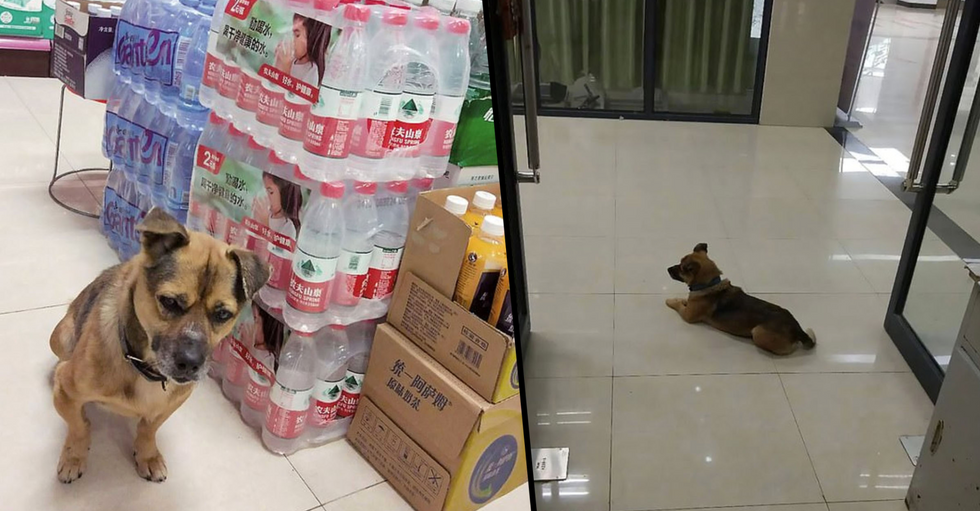 A devoted dog has gone viral this week after he was spotted waiting for his owner at Wuhan hospital 3 months after he had passed away.

Keep scrolling to read the full story, and to find out the fate of the heartbroken pup...

If there's one thing that dogs are known for...

It is their undying loyalty.

It is common knowledge that our dogs would walk to the ends of the Earth for us...

And it is one of the many reasons why we love them so much.

But now, one dog has gone viral for his unwavering loyalty to his owner...

But it is amid the most heartbreaking of circumstances.

A dog in Wuhan, China, is perhaps the most loyal of them all.

The devoted pooch has gained viral fame this week after photos of him waiting patiently for his owner emerged.

Wuhan is believed to be the origin city of the ongoing medical pandemic.

The city went into lockdown back in January...

But has since suffered over 4,000 deaths as a result of the deadly virus, according to the BBC.

And, with the devastating death rate, many have been forgetting about the pets who have been left behind.

Many innocent animals have been left without owners during this pandemic...

And, even more devastatingly so, they are completely unaware of what has happened to their beloved masters.

So, coming back to our story...

A confused dog has gone viral after he waited for his owner outside of the hospital in which he had died months prior.

The 7-year-old mongrel has been pictured waiting patiently for his owner...

All while unknowing that he had actually passed away as a result of the deadly virus.

Xiao Bao, which translates to Little Treasure, had arrived at Wuhan's Taikang Hospital back in February...

When his elderly owner had fallen ill with severe symptoms of the virus.

But, only 5 days after being admitted...

The pensioner sadly succumbed to the virus and passed away.

But, heartbreakingly, Little Treasure had no idea what had happened to his owner...

The loyal dog waited in the lobby of Taikang Hospital for more than 3 months...

During which time he was fed by concerned members of staff. Several times, staff attempted to drop the dog off elsewhere, but he would consistently return to the hospital to wait for his owner.

And, on April 13th, lockdown restrictions were eased across the city...

And the hospital supermarket reopened, where he was then cared for by shopkeeper, Wu Cuifen.

"I first noticed the little dog when I returned to work in the middle of April. I called him 'Xiao Bao'. That's the name I gave him."

Staff said Xiao Bao refused to leave. Even when they deliberately dropped him off somewhere far away, he would make… https://t.co/UMOusTlfao
— Hans Solo (@Hans Solo)1590490235.0

"They told me Xiao Bao's owner, a pensioner, was admitted with [the virus]. Then he passed away, but Xiao Bao didn't know and just stayed in the hospital looking for him."

"It never left the hospital. It was incredibly touching and so loyal. I grew familiar with the dog and later brought him into the shop." She explained. "Every morning when I opened up, Xiao Bao would be there waiting for me. He saw me off at the end of each day."

But this month, as the hospital began to fill with regular patients once more, staff became concerned about the dog roaming the corridors...

So the nurses contacted the Wuhan Small Animal Protection Association, whose members took the little dog in.

The organization is vowing to get the little dog rehomed...

A #dog in #Wuhan had been waiting at a hospital for 3 months for his owner who died from the coronavirus. After wai… https://t.co/ZSoms3aGlB
— ShanghaiEye (@ShanghaiEye)1590480000.0

Which, going by the adorable photos of this dog, shouldn't be a difficult task. God's speed, Little Treasure! But, sadly, this pooch isn't the only pet to be left alone and confused after the death of its owner. Keep scrolling to read about the 2 dogs left to comfort each other after their owner died... Though you may need some tissues for this one.
20%