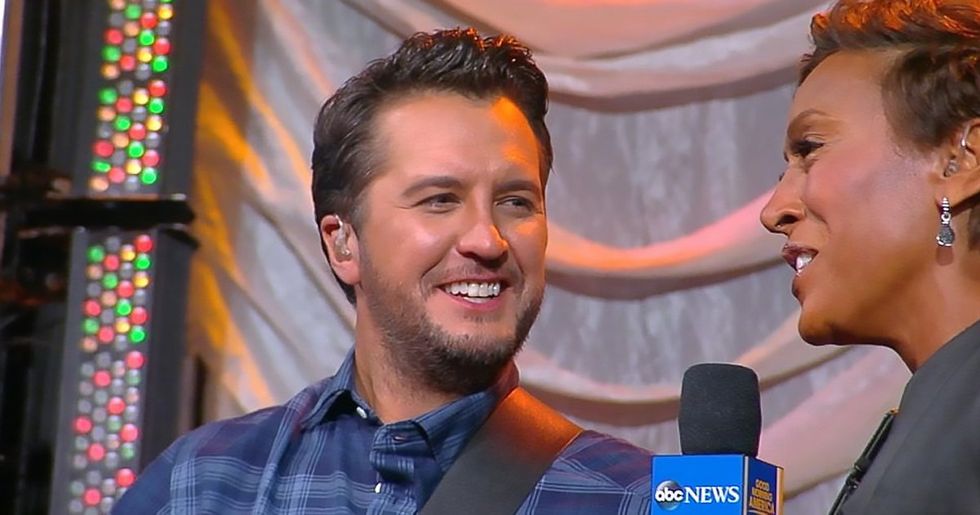 Luke Bryan is a famous country singer + songwriter and also a judge on the popular singing competition show – American Idol. He has a very approachable, down-to-earth personality and a wildly successful career. Though, life hasn't always been easy for Luke.

His music career started in 2007 and just a short three years later he received the "Top New Artist" award from the Academy of Country Music Awards. Not too shabby. And in 2013, he received the Country Music Association Award "Entertainer of the Year." He has received numerous awards over the years and has had 14 number one hits. But, unfortunately for Luke, with all the good he has received in his life, there has also been bad.

Bryan was born in Leesburg, Georgia to peanut farmers. His plan was to move to Nashville after high school graduation to pursue a singing career, but an accident in his family halted his dream.

But the singer's rise to fame did not come without heartache.

Luke's older brother, Chris, was tragically killed in an auto accident when Luke was just 19-years-old.

So, his plan to move to Nashville after high school to pursue his dreams was derailed. Suffice to say, Luke decided to stay in Georgia to be with his family.

Luke is the youngest son to LeClaire and Tommy Bryan.

He was born on July 17, 1976, as Thomas Luther "Luke" Bryan. I think he might get his personality from his mama.

He ended up attending Georgia Southern University and received a bachelor's degree in business administration.

He also met his wife, Caroline, at a bar during his tenure as a student. The two married in 2006 and had two sons.

Georgia Southern University was founded in 1906 and the main or "flagship" campus is in Statesboro, Georgia.

Statesboro is located in the southeastern part of the state and is about 47 miles from Savannah.

Bryan worked at his parents' farm during the day and sang at bars at night.

But his father "fired him" so he could pursue his dreams. And that was the best thing that could've happened to him. And so he did...

It is obvious that Luke's country roots run deep.

From the lyrics in his songs to the way he lives his life. He grew up on a farm and stays true to that, despite all the glamour his celebrity status brings.

His most catchy (and I think popular) song to date is titled, "Country Girl (Shake It For Me)."

Certainly a favorite amongst his female fans. I'm assuming his wife was the inspiration behind the song. I mean I sure hope so.

Luke started off in the industry writing songs for Travis Tritt and Billy Currington.

Not too long after that, Bryan signed a recording contract with Capitol Nashville. And the rest, as they say, is history. He has been on the rise to stardom since.

Not only lucky in the music industry, but he was also lucky in love. He married Caroline Boyer (his college sweetie). But, actually, the couple had split up for five years before they reconnected and sealed the deal.

They reconnected after he performed at a little bar in Statesboro. "We kinda saw each other and talked a little bit and then started emailing back and forth a little bit," he told HuffPost. "And she was like, 'Hey, you want to come to my family’s Christmas party?' I went to the party and the rest is history."

They married in Turks & Caicos and spent their honeymoon in the Colorado mountains.

And as the saying goes, "behind every successful man is a strong and wise woman." Caroline supposedly has her master's degree and was an excellent public speaker in college.

Bryan is the true definition of a family man. You can see he takes great pride in his family.

The year 2007 was a big one for Luke. He made his appearance at the Grand Ole Opry. His sister, Kelly, had organized the event and invited all of their friends to watch him perform.

But sadly, not even a month later, Kelly passed away in her home from "unknown causes." She was the only sibling Luke had left. Kelly had three children of her own.

What is even more disturbing is that no one could determine his sister's cause of death.

Apparently, she was at home with her then 3-year-old when it happened. "The autopsies, the coroner, no one could figure it out," Luke reportedly revealed to People in 2013.

"My only older siblings...gone from the world, in a flash, in two...two different, crazy, tragic manners, that...we'll never know, and never understand." - Luke Bryan

Two absolute tragedies for Bryan and his family. There are no words. According to Wikipedia, "The combined tragedies of losing his brother and sister is the inspiration behind the performance of Bryan's single "Drink a Beer" (written by Chris Stapleton).

His son "Bo" was born nearly a year after his sister's passing.

And Tate was born two years after that. So while the loss of his sister certainly affected him, his sons were the light to his darkness.

Shockingly, the Bryan family tragedy didn't end with the passing of his siblings.

But Luke and his wife, Caroline did not think twice...

The couple took in their nieces and nephew without even discussing it. "The award-winning artist told People that it was a big adjustment for him to take on, especially since he had two little boys of his own."

Tilden "Til" Cheshire is now living with the Bryans in their Tennessee farmhouse, while his older sisters, Kris and Jordan are away at college.

The tragedies this family had to endure are unfathomable.

But Luke and Caroline seem to be pressing on for the sake of his sister's kids.

Luke has said that raising his teen nephew has been somewhat of a challenge.

He was quoted, "My main thing with Til is just properly giving the right amount of advice and realizing you’re talking to someone who is becoming an adult."

"I have to be that parent role where if he does something, he needs to get in trouble, but I want to be a friend to him too."

This is a problem many parents face. I do not have teenage children (yet), but I can only imagine it would be hard to find that balance of disciplining – while ensuring – your kid can feel comfortable enough talking to you about anything.

And it's hard not to deny that Til has stepped in as an older brother for his sons.

"They learn all dances from him," the singer joked. “What is it? The Dab and all that. And the Nae Nae. He teaches them all that."

Luke enjoys spending quality time with his family. He is also pretty outdoorsy, and often shares pictures on Instagram.

He has also featured his sons and nephew in his music video, "What Makes You Country."

Bryan and his love of the outdoors led him to be the co-owner of Buck Commander.

If that sounds familiar to you, it is, since it's the sister company to Duck Commander – aka Duck Dynasty.

They sell a full line of hunting gear, clothing, and novelties. And just like Duck Dynasty, they too have a show that airs on the Outdoor Channel. So you can tune in to see all of their country boy shenanigans.

Despite all of their tragedies, this family has learned to carry on.

Luke has also supported many charities.

On September 23, 2017, ABC announced that Bryan would be a judge alongside Katy Perry on American Idol.

Lionel Richie was the third judge to join the panel, marking it the 16th season for the show, with Ryan Seacrest still at the helm of MC.

The singer has had to endure great hardships in his life.

But it is obvious that he is living his life to the fullest. And while he is somewhat of a goofball, he always shows compassion on the show to aspiring singers. And we all know that no matter what life throws at you, the show must go on.