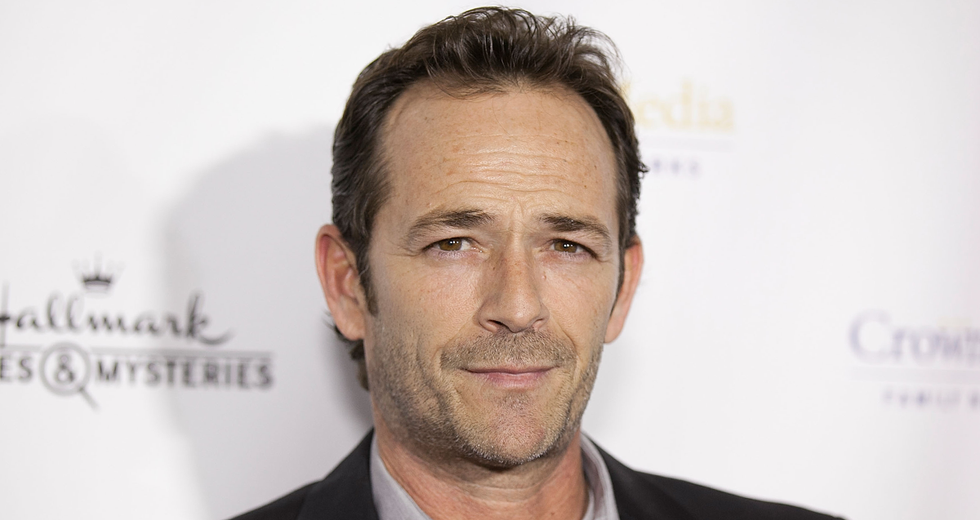 Perry rose to fame in the early '90s as a regular cast member on the hit TV series, Beverly Hills, 90210. Since then, he's had a long and storied career in film and television. Perry was currently starring on the CW teen drama, Riverdale, as Archie's father Fred Andrews. According to TMZ, Perry had recently been shooting episodes for Riverdale on the Warner Brothers lot in Los Angeles.

On Wednesday, Fox announced that there would be a reboot of Beverly Hills, 90210. Perry's co-stars from the original (Jason Priestley, Jennie Garth, Brian Austin Green, Tori Spelling, and Ian Ziering) have all signed on to the reboot, and now, unfortunately, we know that Perry won't be joining them.

"Actor Luke Perry, 52, passed away today after suffering a massive stroke. He was surrounded by his children Jack and Sophie, fiancé Wendy Madison Bauer, ex-wife Minnie Sharp, mother Ann Bennett, step-father Steve Bennett, brother Tom Perry, sister Amy Coder, and other close family and friends. The family appreciates the outpouring of support and prayers that have been extended to Luke from around the world, and respectfully request privacy in this time of great mourning. No further details will be released at this time." The news was first reported by Entertainment Weekly.

Perry's '90210' castmate Shannen Doherty voiced her support of the actor last week on her Instagram page.

She posted a photo of their characters locked in an intimate embrace with the words "My friend. Holding you tight and giving you my strength. You got this."
The rest of the Riverdale cast also voiced their support, saying "Love you, bud" and "Thinking of you, Luke." Our thoughts are with Perry's family in this trying time.

Love from Perry's friends continues to pour in.

Ian Ziering, aka Steve Sanders, shared some wonderful photos of the two of them throughout their careers.

Starting with one when they were first cast on 90210 together.

He said, "No words can express what my heart feels hearing today's shocking news. Let us all say a prayer for his speedy recovery."

He also added this more recent image of the two of them getting back together.

"Dearest Luke, I will forever bask in the loving memories we've shared over the last thirty years. May your journey forward be enriched by the magnificent souls who have passed before you, just like you have done here for those you leave behind. God, please give him a seat close to you, he deserves it."

The two became friends in a time when both of them became famous at very young ages.

Please. I beg of you to show Luke’s beautiful family the respect and privacy that they deserve during this devastat… https://t.co/jwfw36MBFe
— Mädchen Amick (@Mädchen Amick)1551728549.0

The entire Riverdale cast and crew has been shaken by Luke's sudden death.

They're dedicating the current season to Luke in the wake of his death.
Their Twitter bio was updated today to read: "Season 3 is dedicated to our lovely family member and friend, Luke Perry."

The executive producers, Warner Bros, and the CW have also issued a statement.

"We are deeply saddened to learn today about the passing of Luke Perry. A beloved member of the Riverdale, Warner Bros. and CW family, Luke was everything you would hope he would be: an incredibly caring, consummate professional with a giant heart, and a true friend to all. A father figure and mentor to the show's young cast, Luke was incredibly generous, and he infused the set with love and kindness. Our thoughts are with Luke's family during this most difficult time."

E! News found one of Luke's very first interviews and shared it today in remembrance.

We will continue to update this page with messages of support as they come in.

This tweet from Riverdale creator & one of Luke's collaborators, Roberto Aguirre-Sacasa.

Dearest Luke- I am so heart broken and at a loss for words. You my friend were a mighty soul and have left your mar… https://t.co/7EwGZ0tQbQ
— Gabrielle Carteris (@Gabrielle Carteris)1551734489.0

Joss directed the movie Buffy the Vampire Slayer that would eventually become the long-running cult-classic show in 1996 and looked to fellow nerd and star of the film Luke Perry for advice.

Another young actor who was coming up around the same time as Perry.

I can’t believe it. No words. Sending you and your family all the love I got! You were so kind and generous. You taught me a lot. #LukePerry
— AUSTIN NICHOLS (@AUSTIN NICHOLS)1551725602.0

How I Met Your Mother star, Alyson Hannigan

Who also starred in Buffy the Vampire Slayer.

She shared this story with People. “Luke was the most incredible friend. He was an old school man. Stand-up and straight-shooting. He was integral and fair and good and strong. His joy was being a father to kids, Jack and Sophie, and he had found true joy and happiness with his great love, Madison. It’s a true loss to all of us who knew him and to those who didn’t. He was a great talent and was a strong and stalwart man, and they will never make another like him."

When I was lucky enough to work with Luke Perry I told him about the pillow of his face I used to sleep with and he… https://t.co/nifCMo6DNt
— Leslie Grossman (@Leslie Grossman)1551723475.0

The two worked together on an episode of Amanda Bynes' What I Like About You.

Jon Cryer with this great compliment.

Luke Perry was a character actor in the body of a heartthrob. Much respect. #RIPLukePerry https://t.co/rqNxPgUoAN
— Jon Cryer (@Jon Cryer)1551723016.0

As did Ryan Seacrest

One Day At A Time creator Gloria Calderón Kellett shares her connection.

I think that's true for a lot of us, which makes this all the more impactful.

I met Luke Perry once during the '08 Writers Strike. The whole thing was deeply surreal. He got infuriated by someo… https://t.co/FGcXYQN1Xs
— David Iserson (@David Iserson)1551724211.0

It's great to hear that during a difficult time like the 2008 writers strike, Luke Perry was out supporting his friends for fair treatment in the industry.

Seth is another Buffy star who is hurting from this loss.

Perry was an icon.

Today NBC shared a story of a time when Perry had to be escorted out of a mall in Seattle because he was being mobbed by fans.

He had to be hidden in a clothes hamper.

Again, our hearts go out to his friends and family going through this hard time.