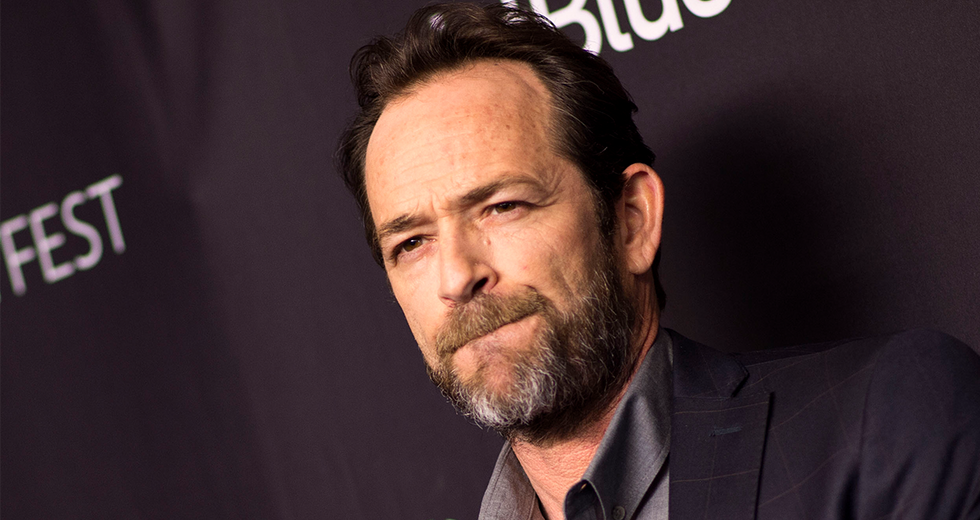 Beloved TV actor Luke Perry was hospitalized Wednesday morning in Los Angeles after suffering a massive stroke, according to TMZ.

Perry is 52 years old. He rose to fame in the early '90s as a regular cast member on the hit TV series, Beverly Hills, 90210. Since then, he has had a long and storied career in film and television. Perry is currently starring on the CW teen drama, Riverdale, as Archie's father Fred Andrews. According to TMZ, Perry had recently been shooting episodes for Riverdale on the Warner Brothers lot in Los Angeles.

On Wednesday, Fox announced that there would be a reboot of Beverly Hills, 90210. Perry's co-stars from the original (Jason Priestley, Jennie Garth, Brian Austin Green, Tori Spelling, and Ian Ziering) have all signed on to the reboot, but Perry has not.

Perry is still in the hospital following his stroke as of Thursday morning, and his current condition is unclear.

But the actor has charmed a whole new generation of fans in the role of Archie's father, Fred Andrews, on the CW's Riverdale.

The 52-year-old actor has had a long and prolific career in film and television.

Perry springboarded from 90210 to roles in the Buffy the Vampire Slayer movie, The Fifth Element, HBO series Oz, and so much more.

Unfortunately, on Wednesday morning, Luke Perry suffered a stroke and was rushed to the hospital.

TMZ reports that paramedics arrived at Luke's home in Sherman Oaks around 9:40 a.m. after a call for help was placed for someone suffering a stroke.

Perry was transported to a nearby hospital where he still remains. His condition is unclear.

Perry's stroke coincidentally occurred on the same day that Fox announced there will be a Beverly Hills, 90210 reboot starring most of the original cast. According to Variety, Tori Spelling told Access Live that Perry's Riverdale schedule prohibited him from being a regular on the revival series but that he would do as many episodes as he could.

Reports say that Perry had recently been shooting on the Warner Brothers lot for Riverdale.

A rep for the actor told People that "Mr. Perry is currently under observation at the hospital," but there isn't much more information available.

According to Fox News, this isn't Perry's first health scare.

In 2015, he was reportedly treated for precancerous growths after a colonoscopy. Since then, he has been an outspoken advocate for colorectal cancer screenings.

Perry has been a busy man in Hollywood for the past few decades.

And he has shown no signs of stopping anytime soon. Perry is set to appear as Scott Lancer in the upcoming Quentin Tarantino film about the Manson murders called Once Upon a Time in Hollywood.

While Perry's rep wouldn't confirm the condition for which Perry is being treated, TMZ reports that it is a stroke.

TMZ published an audio clip from the 911 call in which it seems someone mentions the word "stroke."

Celebrity friends and others are wishing Luke Perry a speedy recovery.

Stars like Dean Cain, Yvette Nicole Brown, and Kristy Swanson all shared their prayers and well wishes for the actor on Twitter.

We hope he recovers and is healthy again soon.

Luke Perry is a staple of television and film, a truly positive presence on the screen. Fingers crossed for a full and speedy recovery.

TMZ reported around noon today that doctors placed Luke Perry in a medically-induced coma, but that's not confirmed.

"Although a family member says Luke was placed in a coma, his rep says he is not. We're told he is sedated," TMZ reports.

As news of Perry's stroke spread, his friends and co-stars shared more messages of love and support.

Wishing all the best and a safe recovery for Luke Perry. I only barely met and worked with him, but he seems as goo… https://t.co/4mPp6vzTqE
— John Behlmann (@John Behlmann)1551381334.0

The consensus around Hollywood seems to be that Luke Perry is a really good guy.

His 90210 co-star Ian Ziering posted this vintage photo to his Instagram.

"No words can express what my heart feels hearing today's shocking news," he wrote. "Let us all say a prayer for his speedy recovery."

Similarly, Shannen Doherty posted this moving photo of the two of them.

"My friend," she wrote. "Holding you tight and giving you my strength. You got this."

The celeb support is pouring in as the day goes by.

Lou Diamond Phillips wrote that he's concerned for his "old friend." So many people are deeply connected to Luke Perry.

"Strength, strength," he wrote. We're all hoping there is some positive news soon.

Comedian Nick Swardson isn't necessarily the person you'd expect to have a connection to Luke Perry.

But the guy is a staple of Hollywood. He's beloved by so many.

Not to mention, he's been a heartthrob since the early '90s.

He has charmed several generations of TV and movie fans everywhere.

This is such a heartwarming story:

This is a good guy, and we hope he is able to make a full recovery and feel better soon.