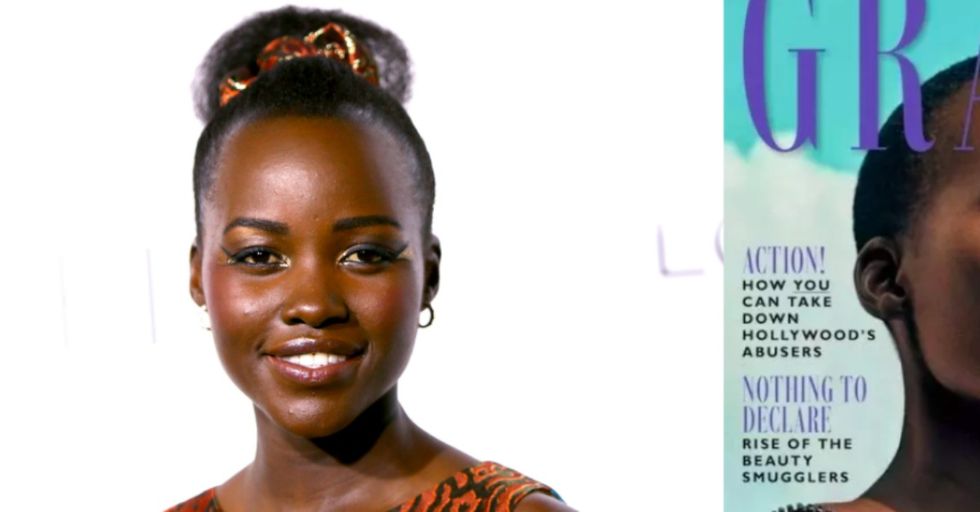 Actress Lupita Nyong'o has won Oscars and hearts everywhere. The fierce, gorgeous woman graced the cover of Grazia UK's November issue, and she looked beautiful. However, there was one glaring issue.

We live in a world in which women are held to impossible beauty standards and women of color are constantly urged to adhere to European ideals. Though we as a society are slowly chipping away at the walls of bigotry and misogyny that have shut out so much female expression and beauty, it's still a process.

When Grazia UK photoshopped Nyong'o's hair without her permission, they participated in a dying tradition of airbrushing true beauty.

Lupita Nyong'o has been an outspoken supporter of women and vocal advocate for women of color ever since she rose to fame for her role in 12 Years a Slave.

Recently, she appeared on the cover of Grazia UK, and she looked amazing. But there was one very problematic issue.

They photoshopped her ponytail out of the shot and smoothed out her natural locks.

Nyong'o posted this collage on Instagram to bring attention to the fact that she did not consent to these changes and that she is mighty proud of her "natural heritage." "As I have made clear so often in the past with every fiber of my being," she wrote, "I embrace my natural heritage and despite having grown up thinking light skin and straight, silky hair were the standards of beauty, I now know that my dark skin and kinky, coily hair are beautiful too. Being featured on the cover of a magazine fulfills me as it is an opportunity to show other dark, kinky-haired people, and particularly our children, that they are beautiful just the way they are. I am disappointed that @graziauk invited me to be on their cover and then edited out and smoothed my hair to fit their notion of what beautiful hair looks like. Had I been consulted, I would have explained that I cannot support or condone the omission of what is my native heritage with the intention that they appreciate that there is still a very long way to go to combat the unconscious prejudice against black women's complexion, hair style and texture. #dtmh"

"#dtmh," of course, is short for "Don't touch my hair," a nod to the Solange song. Fans jumped into the comments to express their support for Nyong'o.

Her powerful words resonate with women all over the globe. It's way past time we should recognize that beauty comes in all shapes, sizes, colors, abilities, and hair types.

The magazine itself made a statement on Instagram apologizing to Nyong'o:

They claimed that they made no request to the photographer for her hair to be altered. They also apologized "unreservedly for not upholding the highest of editorial standards."

Honestly, give Lupita Nyong'o all of the trophies.

Grazia UK issued what seemed like a heartfelt apology, which is a good step. Now let's get to the place where these apologies aren't necessary because we're celebrating women "unreservedly" for exactly who they are.