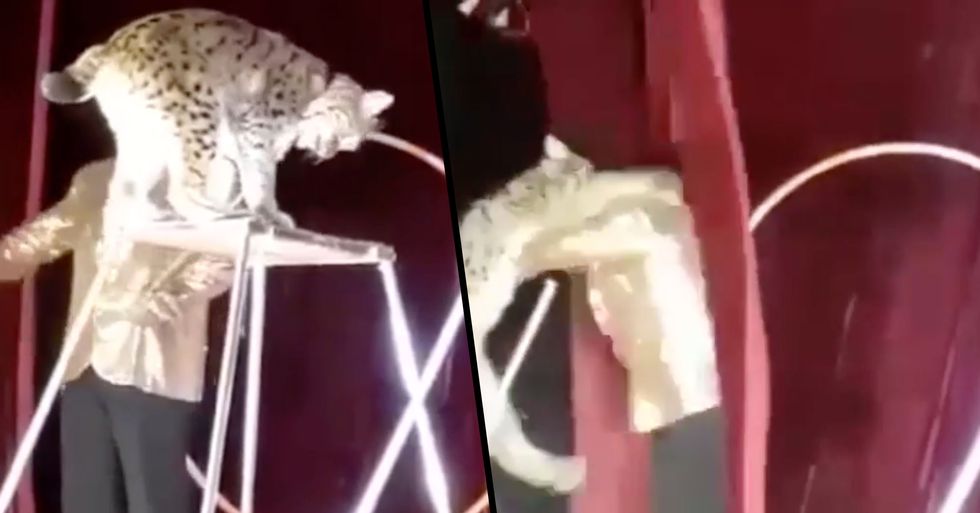 Lynx Savagely Attacks Tamer After He Pulls It off a Chair

Animals have been used in the circus since the eighteenth century. Surprisingly the treatment of animals has barely changed, as they still endure cruel training methods all in the name of entertainment.

Now a trainer has been attacked by a chained up lynx during a circus performance in Georgia.

Circuses strive to capture the attention of the audience...

Not to mention exotic animals.

As we all know, wild animals are just that... wild.

Forcing them to perform tricks can become problematic.

I think you get where I'm going with this.

The government website explains: "The use of wild animals in traveling circuses has no place in modern society and does nothing to further the conservation or our understanding of wild animals."

Sadly, there are some countries who still allow wild animals in circuses.

Stuck in inhospitable conditions, animals such as elephants, big cats, bears, and monkeys are forced to adapt to abnormal surroundings. Scroll to the end to see the horrifying video of Lynx attacking trainer...

They are kept chained up until they are needed to perform.

Traveling circuses and public exhibitions aren't able to offer animals the proper care they need, this results in some of the saddest forms of captivity.

They spend most of their lives in tiny enclosures.

But as long as the money keeps coming in, and people keep visiting, it's a vicious circle for these defenseless animals.

Their health and behavior are seriously impacted.

Being taken away from their natural environment and kept in such small enclosures, animals exhibit unusual actions, such as pacing back and forth and depressed behavior. Not to mention the physical damage.

Elephants and other animals are forced to assume unnatural positions.

This results in joint and hernia problems due to being made to perform handstands. Other animals are forced to do tricks that they would never voluntarily do in their natural habitat, such as jumping through burning hoops or dancing on hind legs.

Tools of the trade...

Bullhooks, whips, and sticks are some of the instruments used to train the animals. Sadly pain and submission are all part of circus life.

It isn't surprising when animals snap.

A trainer has been attacked by a chained lynx during a circus performance.

The footage shows the chained up animal on top of a platform on stage.

A man in a gold jacket can be seen pulling the lynx with a rope.

The lynx can be seen trying to resist performing the act, seemingly scared of jumping from the platform.

The trainer continues to pull the lynx from the platform.

Eventually this causes the platform to collapse, causing the lynx to fall, and in a panic run around frantically.

The audience watch in shock.

The lynx then leaps onto the trainer, clawing and biting, as the audience screams.

It could have turned out much worse than it did.

Although we don't yet know if the trainer was injured, local media reports that there were no barriers between the stage and audience, so many children in the front row could have been hurt by the lynx if it escaped.

But it's these circus practices that cause this.

Using animals in unnatural ways is dangerous, not only to the animals but to the people that take part and visit the shows. Sadly, as long as they're funded, they will continue to exist.

It says on their website: "Elephants are chained, and big cats are imprisoned in cramped, filthy cages, in which they eat, drink, sleep, defecate, and urinate-all in the same place. And there's no relief once the animals reach a venue, where they remain caged and are chained in arena basements and parking lots." "Avoid all circuses that use animals. Talk to friends and family members, particularly those with young children who might be especially inclined to go." Let's try to end these unethical performances.