Adele Never Set Fire to the Rain, and These Other Lyrics That Never Happened | 22 Words 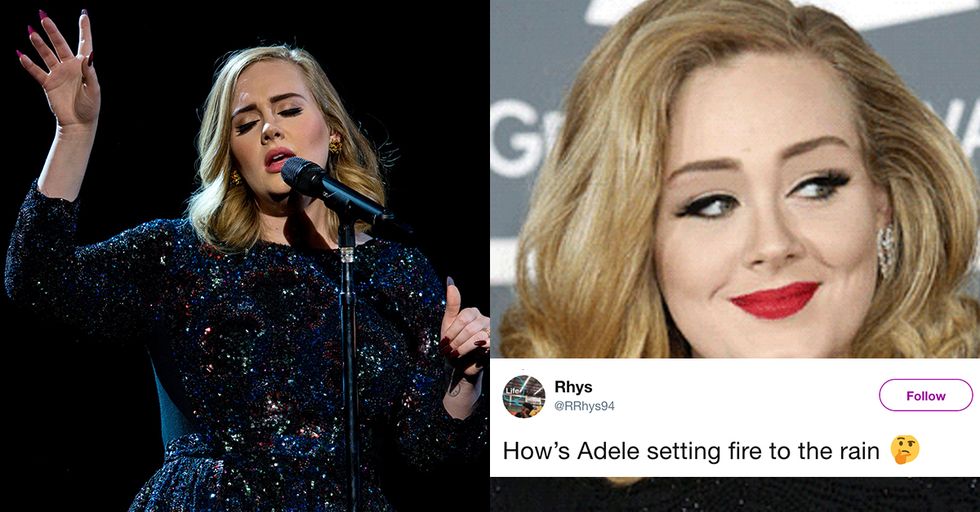 Adele Never Set Fire to the Rain, and These Other Lyrics That Never Happened

I think we can all pretty much agree with the fact that lying is wrong. Sure, you can make an argument for harmless white lies that protect people from having their feelings hurt, but otherwise, it is probably best to tell the truth.

So why is it, then, that we allow musicians to get away with lying right to our faces? Or...to our ears, I guess.

You might be innocently jamming out to some tunes and not even realize that the song you are listening to is filled with lies. I know that there's such a thing as artistic license, but still. Some song lyrics are just blatantly false.

The people of Twitter recently came to the same realization. What followed was a hilarious discussion about song lyrics that are definitely filled with lies. Read forward at your own risk. Personally, I'm not sure I can ever trust another musician.

It all started with British radio DJ Scott Mills.

Do you have any examples of lyrics in songs that clearly NEVER HAPPENED? Was Anne Marie really dancing on the hood… https://t.co/xZSnmShtAR
— Scott Mills (@Scott Mills)1542622255.0

Mills asked whether people had examples of song lyrics that were definitely lies. And people totally did.

Let's talk about that horse.

@scott_mills Surely no one has been through the desert on a horse with no name. You'd give it a name out of sheer boredom if nothing else.
— David Absalom (@David Absalom)1542623562.0

If you're wandering through the desert, you have to do something to keep yourself occupied. Might as well start with naming the horse you're riding on.

Anyone who thinks "sorry" is the hardest word (lookin' at you, Elton) clearly has never heard anyone try to pronounce the word "February."

Surely there was at least one bloke standing against the wall and marveling at all of the kung-fu fighting going on right?

@scott_mills Pretty sure Mariah Carey wants more for Christmas than a guy, can pretty much see the look of disappoi… https://t.co/f2FxFbYVke
— Jordan (@Jordan)1542625315.0

Perhaps she should change the lyrics to: "All I want for Christmas is you...and a pile of gifts that show how much you love me."

How did he do it?

That's right. You heard it here first, folks. Lionel Richie is not actually capable of dancing on the ceiling. Sorry to disappoint.

But he doesn't ever clarify what "that" is. That leaves plenty of room for interpretation.

I bet she hasn't actually called 1,000 times either. Can you imagine how astronomical her phone bill would be?

And while we're talking about Adele...

Excuse me, Adele? Hi. Do you know how pavements work? They don't go anywhere. They're just there. It's gonna be a short chase.

That would be a pretty heavy pencil! (I don't totally fault him for this, though. "A pencil full of graphite" doesn't have quite the same ring to it.)

We all know how the week would have truly gone down. And it's nothing like the song.

That's not to say we're opposed to the idea, though. Better keep an umbrella hand just in case.

Katy Perry, we need to talk.

@scott_mills I don’t think anyone has ever felt like a plastic bag, drifting through the wind wanting to start again...
— Alexandra B (@Alexandra B)1542624470.0

We meet again, Elton! We can't keep doing this.

Are we sure the woman in question wasn't some sort of four-legged animal? A horse, maybe? That would explain how she could wear two different pairs of shoes at once.

@scott_mills I doubt that any spice girl would allow their lover to get with their friends
— Owen McGhee (@Owen McGhee)1542625258.0

"Getting with [your] friends" actually seems like maybe the worst way to end up as your lover. Right? Back me up here, guys.

Do you even have a permit?

Not only that but "rock and roll" is kind of an abstract thing to try and build an entire city upon! You clearly didn't think this through.

We super do, though.

They do use a double negative: "We don't need no education." That means they do need some education.

You want to WHAT?! That doesn't seem even remotely safe!

I feel like a more appropriate title would have been "You can call me Al, but it is not my name. My name is Paul Simon, and I'd actually appreciate it if you just called me Paul."

You're in space, Tom. Surely you can't be this confused. You are an astronaut, right?

I just don't see a nickname like Mr. Fahrenheit taking off, if I'm being totally honest. I guess it's never too late, though.

"That don't impress me much."

Oh, baloney, Shania! You are impressed. You just don't want to admit it.

Let's do the math.

I guess it's somewhat likely that Bon Jovi has seen 1 million faces. It is impossible that he rocked them all.

Not even one of them.

This is probably for the best if I'm being honest. That would probably make for pretty cramped quarters!

I don't think I'd even walk one mile. We have cars, people.

You are going to be fired!

You do not have time to cook breakfast, bud! This is a "grab a piece of bread as you walk out the door" situation!

Ooh, that one Stings.

@keirshiels @scott_mills Similarly, Sting might well *intend* to watch every breath you take, every move you make a… https://t.co/Ab0T61FUG5
— Jamie Douglass (@Jamie Douglass)1542703415.0

Am I supposed to believe Sting never sleeps? Or, like, goes to the bathroom? Ever?

If your room doesn't have a roof, you have got some problems that need tending to. It might not be the best time to clap your hands and talk about how happy you are.

Aw, come on. He could probably run through an open door. I'm with you on the rest of it, though! Share this with someone who could use a laugh today!