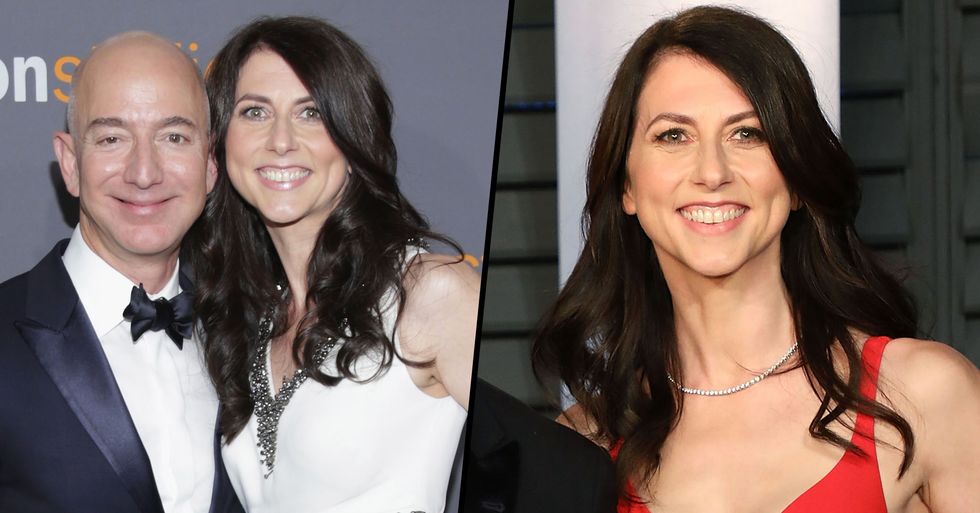 Jeff Bezos' ex-wife Mackenzie Scott has just been labeled the richest woman in the world, and what she has planned with her fortune shows just how switched on to current events she really is...

People have been sharing posts all over social media giving their reasons that they think billionaires shouldn't exist.

And while some points make complete sense, Jeff Bezos' ex-wife just might make you think a little differently.

And now it seems that Bezos' ex-wife has taken the spot of the world's richest woman...

With a net worth of $68 billion, according to the Bloomberg Billionaire Index.

The initial success of the online store was staggering.

Amazon.com had sold books all across the United States within the first thirty days of setting up.

Which expanded across forty-five foreign countries!

And now, the demand for online shopping is at an all-time high...

As a result, the CEO, who owns an 11% stake in the company, has grown his vast fortune by a further $24bn so far during the pandemic, a roughly twenty percent increase over the last 4 months to $138b.

With shares in the company.

Bezos married his now ex-wife MacKenzie way back when in 1994.

But after 25 years of marriage, the two went their separate ways, finalizing their divorce in 2019.

Which came at a big cost to Bezos.

The settlement saw Scott walking away with an eye-watering $38 billion.

And Scott was determined to pay it forward.

She donated $2 billion of her newfound wealth to various charities.

After receiving her 4% stake in Amazon, she signed the Giving Pledge...

A nonprofit organization that encourages those wealthy enough to donate at least half of their earnings over their lifetime.

She did this because "Like many, I watched the first half of 2020 with a mixture of heartbreak and horror."

"Many will choose to share some of what they have with people whose equal participation is essential to the construction of a better world."

Want to know where those dollars are going?

You can't fault her for her generosity!

And it seems as though things are paying off for Scott...

Following up on the commitment I made last year to give away the majority of my wealth in my lifetime:… https://t.co/wAOeOFKyZB
— MacKenzie Scott (@MacKenzie Scott)1595958034.0

As she's seen a surge in her wealth after shares increased due to the global pandemic.

Which has increased her net worth to over thirty billion in the last year...

However, Scott also has her own success story...

MacKenzie Bezos wrote a book entitled The Testing of Luther Albright. I read it in college, the summer I studied at… https://t.co/zlN0LwJ0Cd
— deray (@deray)1547121263.0

In 2006 she won the American Book Award for The Testing of Luther Albright and is the founder of Bystander Revolution, the anti-bullying organization.

MacKenzie is going to be amazing and thoughtful and effective at philanthropy, and I’m proud of her. Her letter is… https://t.co/YoohADeiiG
— Jeff Bezos (@Jeff Bezos)1559050724.0

The fifty-year-old is now the twelfth-richest person in the world!

She sounds a lot more deserving than Bezos, that's for sure.