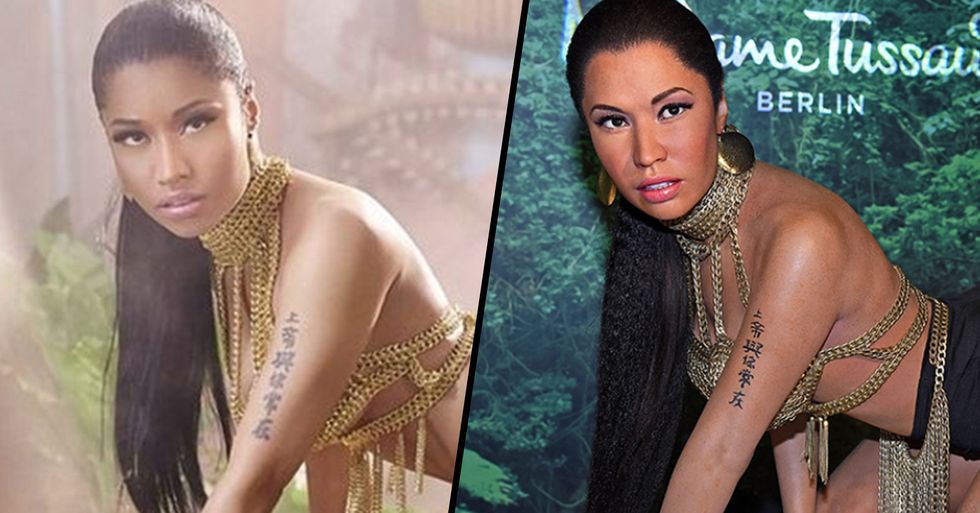 Nicki Minaj is a rapper, singer, songwriter, record producer, actress, and model extraordinaire - but that's not all. Minaj also has one of the most iconic looks in music history. You'd recognize her anywhere!

Which makes her latest Madame Tussauds waxwork all the more baffling. Scroll on to see the horrific effigy - and the best of the internet's reactions.

For those who've been living under a rock, let's take a little walk down memory lane. Come with me on a journey to the past. All the way back to 2009.

But scandal never traveled far behind her. In October of that year, a video leaked that showed Minaj in a fight with songstress Mariah Carey during the American Idol auditions. According to sources, Carey accused Minaj of saying, "If I had a gun, I would shoot that b*tch," but Minaj denied saying it. Carey doubled down, saying that Minaj had created an "unsafe work environment" and called in her security team for backup. Then, Carey claimed Minaj didn't have a number 1 song on the Billboard Hot 100 during a live broadcast, and that, apparently, was Minaj's limit. Soon after, both women left the show for good.

In 2013, Minaj made her first foray into acting by co-starring in a movie with Cameron Diaz.

It debuted at number 2 on the Billboard 200 but the album was plagued by scandal, the biggest of which surrounded the music video for her song "Only." According to the Anti Defamation League, the video contained all kinds of Nazi-related imagery that was insensitive for Holocaust survivors. Yikes.

The movie got a hot 90% on Rotten Tomatoes, even receiving acclaim from film critics. She was even nominated for a Teen Choice Award for her work on the film. Listen, it's not an Oscar but it will do.

In 2017, Minaj was featured on Jason (I dare you not to sing his name out loud) Derulo's single, "Swalla."

The song became a monster hit, topping the charts at home and internationally. The next month, Minaj officially became a model after signing with the prestigious modeling agency, Wilhelmina. Yes, girl. Get that money!

In March of the same year, she pulled a boss move...

And alongside her illustrious musical career?

Well, there's something else Minaj is well known for. She has an instantly recognizable and totally iconic look.

Minaj has never been afraid of color.

If there's one thing Minaj's look is most famous for, it has to be that incredible butt.

So you'd think a waxwork of the star would be pretty easy.

She's quickly recognized and has a bunch of easy to hit reference points to create a convincing lookalike. Or so we thought ... Because this week, waxwork giant Madame Tussauds unveiled their latest Minaj-a-like - and people were not impressed.

It's not the first time they've missed the mark.

This Beyonce effigy caused massive controversy when it was launched, with some accusing the company of whitewashing the star.

We don't know about you, but this Zac Efron will forever haunt our nightmares.

And Minaj's waxwork is the latest to add to the list of shame.

Remember her incredible (and provocative) video "Anaconda?" Well, the waxwork is supposed to depict Minaj in this get-up.

If you haven't seen the video, let's just say Minaj's rear has a starring role.

The waxwork is so poorly done that it's basically unrecognizable as Minaj.

Many took to Twitter to voice their dissatisfaction with the finished waxwork.

Jokes were quickly made.

"Sorry to this man."

Some had their suspicions.

Perhaps this wasn't Nicki Minaj after all?

People were quick to point out lookalikes.

We actually think Kourtney Kardashian would be pretty pleased with this.

Nicki Minaj in The Crown? We'd love to see it!

This one is a little less flattering.

But hey, he did bag Jennifer Lopez ...

And some had a prediction.

If we were Nicki, we'd have beef with this waxwork, too.

And some have gone a step further.

They're calling it a racial issue.

Do you think this terrible lookalike is deliberate - and with pernicious intent?

Here are the pictures that got the whole internet talking.

Let's begin with the obvious - there's no way that's a Nicki Minaj derriere.

Because, let's face it, she's hardly one to bite her tongue! Curious for more waxwork fails? Scroll on for some of the very worst.