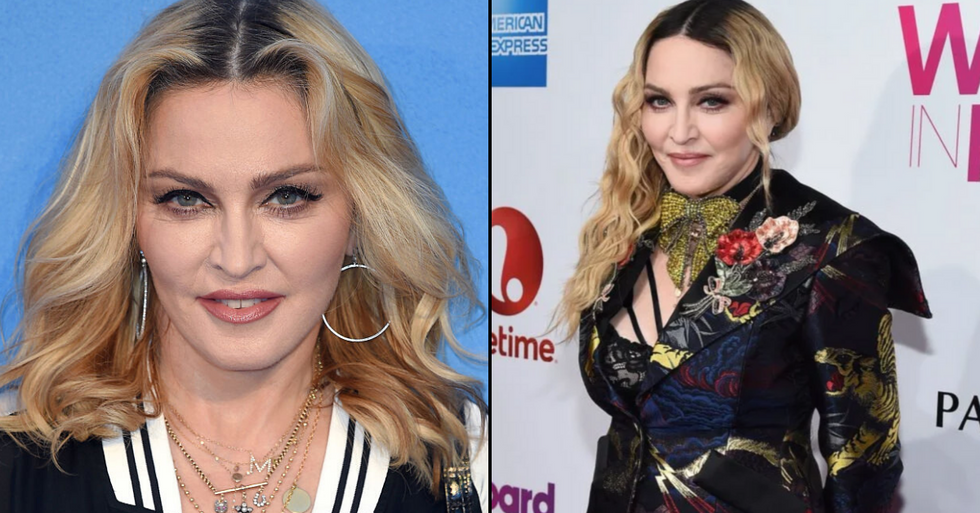 Amid the pandemic, Madonna has taken to Instagram to confirm that she recently tested positive for the virus.

Keep scrolling to see what she had to say about her health...

Madonna has had 12 records go multi-platinum.

She’s sold more than 64 million albums in the United States.

She was named after her mother.

Her mother died of breast cancer at age thirty, when Madonna was just 5 years old.

She was a straight-A student in high school...

She received a dance scholarship to the University of Michigan but dropped out 2 years in, to pursue a dance career in New York City.

She arrived in New York with $35 in her pocket.

She made ends meet by working as a waitress at Dunkin’ Donuts, and eventually became a backup dancer.

She created a band called Breakfast Club with a boyfriend, then left and created a new one called Emmy with another before deciding to pursue a solo career.

Her lustrious solo success began with her debut single “Everybody."

Released in 1982, it became a club hit and led to the creation of her first album, Madonna.

Madonna’s fashion sense became a signature of the 80s.

Her second album was a huge success.

Like a Virgin was the first album by a female to sell more than five million copies in the United States.

In 1984, her performance at the MTV Video Music Awards made major waves.

Wearing a wedding dress and writhing on the floor, her iconic performance of “Like a Virgin" set the bar at MTV’s first ever VMAs.

Madonna has also done her fair share of acting...

She played the title role in the comedy-drama Desperately Seeking Susan and was also in A League of Their Own, Evita, and The Next Best Thing, among other movies.

The star was married to Sean Penn.

They got married in 1985; she dedicated her third album, True Blue, to him. The couple weren't meant to be however, and got a divorce in 1989.

She's also had her fair share of controversy... like when The Vatican condemned one of her music videos.

In the video for “Like a Prayer," she made use of Catholic symbols like stigmata and burning crosses, and found religious groups up in arms.

She’s never been afraid to push the envelope.

Her music videos have included sadomasochism, nudity, and other provocative imagery—MTV even deemed the video for “Justify My Love" too explicit to air.

Her controversies came to a head in 1994.

Despite this, her success had no bounds, and she was inducted into the Rock and Roll Hall of Fame in 2008.

At the ceremony, she had fellow Hall of Fame inductees, The Stooges perform 2 of her songs.

She was the best-selling single artist of the 2000s in the United States.

She was also the most-played artist of the decade in the UK and grossed over $801 million on her tours during that decade.

The MDNA Tour was the highest-grossing tour of the year and showcased controversial subjects like violence, human rights, nudity, and politics.

Billboard named Madonna its Woman of the Year in 2016.

She gave an impactful speech about ageism and sexism at the ceremony. She was also a vocal supporter of Hillary Clinton during the 2016 election.

She’s the wealthiest woman in the music business.

Her estimated net worth is between $590 million and $800 million.

Though, surprisingly, Madonna has always been self-conscious about her voice.

Music experts praise her airy voice, even though it’s not as powerful as some of her diva counterparts. Critic Tony Sclafani notes that she uses “subtext, irony, aggression and all sorts of vocal idiosyncrasies" to her advantage.

The loss of her mother was a big influence on her work.

She said, "The anguish of losing my mom left me with a certain kind of loneliness and an incredible longing for something. If I hadn't had that emptiness, I wouldn't have been so driven."

She’s been inspired by everyone from Sylvia Plath to Frida Kahlo.

Among her influences, she lists her Italian-Catholic upbringing, baroque music, and Marilyn Monroe, among others.

The charity has built 10 primary schools educating more than 4,000 children.

And she even holds the record for the most costume changes in a single film.

Her wardrobe changed 85 times during the movie Evita.

Amid the pandemic, the Queen of Pop gave fans a health update.

And revealed that she had tested positive for the virus.

The star revealed that she had the virus at the end of her tour in Paris over 7 weeks ago.

"I am not currently sick," she wrote on Instagram. "When you test positive for antibodies it means you had the virus, which I clearly did as I was sick at the end of my tour in Paris over seven weeks ago, along with many other artists in my show but at the same time."

"We all thought we had a very bad flu. "Thank God we are all healthy and well now. "Hope that clears things up for the bandwagon jumpers! Knowledge is power!"