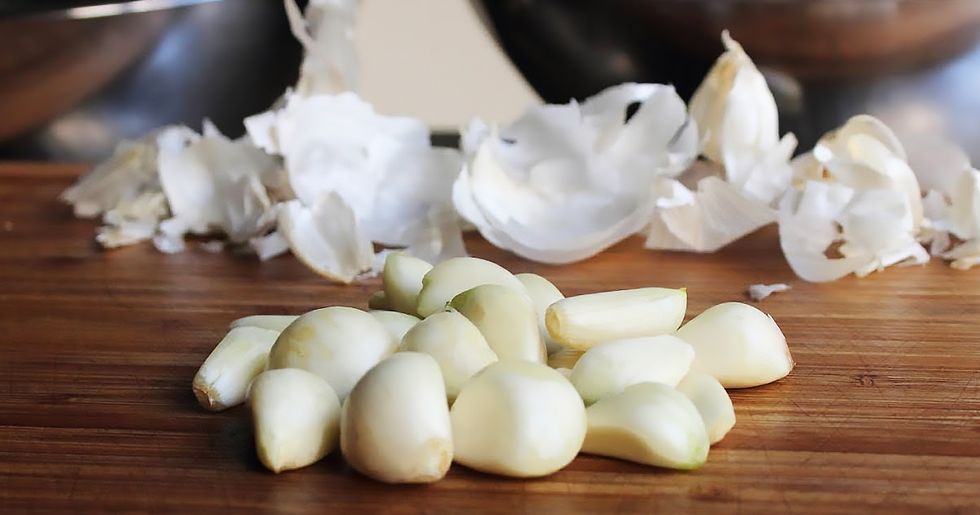 For those of us who aren't naturally gifted at cooking, we can find ourselves stuck. We love to (and need to) eat, but cooking is way too hard. So we just give up, and let our pots and pans grow dust and our vegetables spoil in our fridge. If we're ever going to cook at home, we need every cooking advantage. Every cooking strategy. Every cooking HACK.

That’s why it’s so exciting when the internet finds a new way to prepare food that we’ve done wrong our entire lives. What if it opens up new tastes we could have never even dreamed of using in our cooking because it was too hard and got us to just order pizza again?

That’s why this trick, which will make pulling garlic cloves out of their shell as easy as picking a quarter up off the ground, is truly revolutionary.

(For real, check it out. This cooking hack is out of control.)

The best part of eating is sitting down with your meal.

When it's all there before you — the main course, the side dishes, maybe even a vegetable — it all looks so delicious and perfect and good. All eating should just be that first, perfect moment.

But the best part of cooking is when it’s all done.

Let's be honest here — cooking is work. And the only good part of work is when it's over. And that's especially true for cooking, because once it's done, you have a fine turkey or casserole to show for it.

Every part of cooking is hard.

It feels like some parts should be easy, right? And yet, there is a mistake to be made at every step along the way.

You never get that smooth, satisfying slice you see chefs on TV (or in this case, in anime) get. Chopping vegetables always gets fumbly, and uneven, and you're in perpetual fear of slicing off a digit.

You never get the timing right! If you take a chicken breast too late, it's still frozen and you have to put it in the microwave, where it gets gross. Take it out of the freezer too early, you forget about it and it'll go bad in the refrigerator. You can't win with chicken breasts.

Even making pasta is hard!

What, are you supposed to just hang out while the water boils? Then when you put the pasta in, it's always too long for the pot, so you have a bouquet of hard noodles sticking out the top. And the straining? Come on!

You can really see the highs and lows of all of humanity in cooking.

When a chef with an understanding of beauty makes a meal, it can be every bit as awe-inspiring as a painting or sculpture. Meanwhile, when I try to make stuffing out of a box, it turns out looking like that deep grey slime you have to scrape out of your sink drain every eight months.

We all need to eat to survive.

That takes cooking out of the realm of painting and sculpture, because unless we're okay with just wasting away, we all have to eat. We do not have to create.

But some of us struggle so much with cooking...

Take me for instance: honest to god I burned a frozen pizza so bad last night I decided it'd be better to eat the cardboard circle it came on instead.

... we know the GrubHub guys by name.

Me and my guy Jonas bump fists every time he brings me Chipotle. He is, without question, my best friend in the world.

But how many people in the world are actually good at cooking?

It does feel rare to find someone who is a legitimately good cook. (And no, your mom doesn't count, because if anyone without the rose-colored glasses of nostalgia tried any one of our mom's cooking, they'd realize it was gross as hell.)

I can’t imagine there are more than 15.

That's it. That's all of them up there. Those are all the good cooks in the world. They say to get good at something, you need master coaching. So how are the rest of us cooking dunderheads supposed to learn?

Thankfully, since the advent of the internet, those 15 people have been able to help the rest of us.

Information is no longer scarce. If someone knows how to do something real well, they can shoot a YouTube video or put up a WikiHow article so as to help everyone else in the world who might be trying to do the same.

The internet's taught us how to peel a banana.

Yes, we were peeling bananas upside down for years until these videos came around. Even worse, we were getting that inside-the-banana slime on our fingernails. Truly we, as a society, are growing.

And pull apart a pineapple.

How many complete pineapples' worth of pineapple were wasted in the brutal hacking and sawing we used to call "slicing" a pineapple? Now we know how to use all parts of the pineapple: by pulling.

And now, these beautiful professor-chefs are ready to help again, this time with garlic.

That's right, we've all been chopping garlic just as incorrectly as we were peeling bananas and eating pineapples. With this new hack found by Twitter user @VPestilenZ he garlic game is about to change. Keep reading to see what it is...

So why does garlic need a hack in the first place?

There is a huge disparity between how delicious garlic tastes and how hard it is to peel. In fact, I'm convinced the only reason we don't have garlic in everything is because of how arduous the task of peeling it is.

There's even a restaurant in California that serves everything with garlic.

The Stinking Rose, which has locations in San Francisco and Los Angeles, has a menu entirely filled with garlic-infused foods. Everything they serve is delicious, but that's kind of a given when they're using all that garlic. Cooking something tasty with garlic is like winning a footrace with a car. It's so easy it's almost not worth doing.

Even the ice cream.

All that said, it crafting a great dessert with garlic does present a higher degree of difficulty. Although, The Stinking Rose pulled it off — another testament to the power of garlic.

Maybe they've known this garlic hack all along?

I can't imagine running a restaurant entirely devoted to garlic and going through the laborious peeling of garlic as we know it today. By my calculations, peeling that amount of garlic needed to sustain The Stinking Rose for one day would take over 16 years. Thank god, there is another way.

Instead of peeling each clove individually, @VPestilenZ suggests a quick stab and pop. And when you see how much garlic she's prepared, and how quickly the peeling goes, you'd be hard pressed to think of a reason to go back to the old way.

And even she's blown away by the response.

You never know what you're going to go viral for, but one thing you do know: it won't be for the thing you expect (i.e. your work, your funny Twitter jokes). All things considered, it's better to go viral for a helpful garlic hint instead of, I dunno, being a scumbag.

But she shouldn't be. Have you ever had garlic BREAD?

Of course the internet was going to lose its mind over a garlic hack — the internet loves garlic bread. There's an entire subreddit devoted to garlic bread memes. And it makes sense — getting garlic bread on the side is the best part of eating spaghetti, hands down.

And why shouldn't they? Think of all the time they've wasted peeling garlic. A lot of these cooks have missed their kids' birthdays and graduations, all because they were chopping garlic.

(And honestly, how many things were we getting wrong before internet hacks?)

If a video came out that said "You've been eating tacos wrong the whole time," I might scoff, but yeah, I'd read it. And then I'd start turning my head before each bite.

@chrissyteigen It worked for me! This person is obviously more proficient, but in principle it worked; the garlic j… https://t.co/40Q3RYu2mv
— Patrick Alba (@Patrick Alba)1560799148.0

The internet is putting the stab-pop method pf peeling garlic to the test, and it seems to be working! Thank god the initial video wasn't an extremely boring deep fake.

In fact, it might be even easier than we thought.

Wow, this guy tried the new garlic method and the garlic just started to pour out. It sure looks like he's got a handle on how to use garlic now!

There's already even been some refinement.

Now if you're at the grocery store preparing to make garlic bread, you know specifically which cloves of garlic to pick up — older garlic. It's helpful to ask your grocer which garlic they put out longest ago.

But some people think the hack is a lie.

Maybe the stab-pop method doesn't work perfectly. Maybe it takes some getting used to before you can do it as quick as @VPestilenZ. Or maybe the folks in this video are just anti-innovation, and they made this video to scare off those who are not afraid to forge a new and better world.

In any event, this makes one part of cooking much easier.

Any friction in a process is a chance for someone who's not very into it a chance to say, "Nope! This isn't for me!" That's why it's so cool that this trick makes garlic more accessible — there's one less reason for someone to bail on cooking. And now we're one step closer to everyone being able to cook.

Next we'll hopefully get a simple hack to make chile en nogada.

Why am I so desperate for a chile en nogada hack? Well, that's because I googled "what is the hardest thing to cook" and chile en nogada popped up. If we could cook that by just poking a chile pepper with a knife, Master Chef would be canceled because everyone would just be a master chef. It'd be like having a reality competition about who's the master breather.