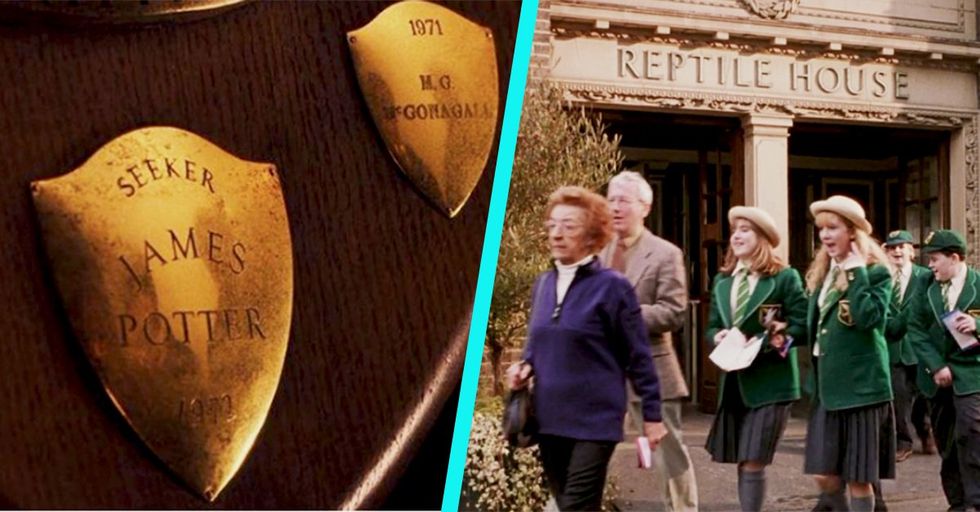 37 Magical Details You Definitely Missed in the 'Harry Potter' Movies

But do you think you've noticed every single tiny detail from the films?

Here are 20 tiny, magical details you might have missed.

Keep an eye out for them the next time you're watching (which we all know you're probably going to do later today).

This first detail is found in Harry Potter and the Sorcerer's Stone. When Harry ends up tagging along to Dudley's birthday celebration at the zoo, we see the above group of students coming out of the reptile house. They're all wearing green — the primary color for House Slytherin. Coincidence? Nah.

Take a look at Ron's robes in this scene from Chamber of Secrets. See how they're lighter and slightly more dingy than Harry's and Hermione's? It's because they're undoubtedly hand-me-downs from his older brothers.
Watch Snape's movements during his battle with Professor McGonagall in Deathly Hallows Part II. Not only is he not attacking; he's actually deflecting McGonagall's attacks so that they hit the Deatheaters behind him!

This is from the end credits of Prisoner of Azkaban. Pretty standard stuff, right? Until you look at those two pairs of footprints in the bottom lefthand corner...
Watch as Harry's eyes easily follow the Snitch when it takes off from Wood's hand. Now, look at Wood, who can't for the life of him find that flying golden ball. Harry was born to be a Seeker. Want to hear the best detail about Chamber of Secrets?

We know that Gilderoy Lockhart is a pretty vain individual, but this scene from Chamber of Secrets reveals something you might not have noticed before: He's also bald. Check out his second wig on his desk.
The Leaky Cauldron sign changes as Harry and Hagrid approach it in Sorcerer's Stone. It starts out black but then reveals itself as the wizards approach. Pretty clever security!

In Chamber of Secrets, the password to Dumbledore's office is "Sherbet Lemon" (a candy similar to lemon drops). In Half-Blood Prince, we see a bowl of sherbet lemons on Dumbledore's desk.

Have you ever wondered exactly what it was that Neville forgot? A closer look at the fourth panel above shows that he forgot his robes! Luckily, he eventually went back to get them. And it's a good thing, too, since those are what saved him after he took off to catch the Remembrall when Malfoy threw it.

Recognize this guy? He's a wizard seen in Prisoner of Azkaban. He's reading A Brief History of Time by Stephen Hawking — interesting, especially since that's the movie that introduces time travel! (P.S. In real life, this wizard is played by Ian Brown from the band The Stone Roses!) This next secret is hidden BEHIND Dumbledore...

Did you notice this billboard behind Dumbledore in Half-Blood Prince? It's for a perfume called Divine Magic. There's just no way that's a coincidence, right!?

In Goblet of Fire, Dumbledore brings Harry to his office to warn him about the dangers he may face. And there just happens to be a Deathly Hallows symbol there. (This is especially mindblowing because this film came out two years before Deathly Hallows was published! J.K. Rowling had a lot of influence over the set design, which is how the Hallows got there.)

OK, this one is just kind of bizarre. Look closely at the wall right above Ginny's head in this scene from Half-Blood Prince. There seems to be a word written there in the shadowy shape. Can you see it?

In the background of the cafe in Deathly Hallows Part I, there's a poster for the play "Equus" — a real play that starred Daniel Radcliffe and Richard Griffiths.
After Hermione arrives late to Divination in Prisoner of Azkaban, you can actually see her hide her Time-Turner in her robes. Obviously, this is well before Harry and Ron (or the audience) knows she has such a thing.

What do Hogwarts students eat for breakfast? Magical versions of cereals we all know and love, of course. Case in point: this box of Cheeri Owls! Where can we find these for real, though??

At one point during the first movie, we see a closeup of this plaque in the Gryffindor trophy case with Harry's dad's name engraved on the center shield. But look at the name on the right side: M.G. McGonagall! So cool! And speaking of Quidditch...

This isn't a mind-blowing realization; just a fun detail to observe. Check out the cups on Hagrid's table. His teacups are the size of giant mugs!
Although he's touted as "The Boy Who Lived" and admired for his potential, Harry doesn't cast a spell once during the whole first movie.
When they're on the train to Hogwarts in The Sorcerer's Stone, Ron's hair part magically changes from the middle to the side in one instant. Probably just a mistake...but it adds to the magic, doesn't it?

Newt Scamander (from Fantastic Beasts and Where to Find Them) actually visited Hogwarts during Prisoner of Azkaban. His name appears on the Marauder's Map when Fred and Geroge first show it to Harry.

In the credits for The Goblet of Fire, the filmmakers make sure to reassure us that no dragons were harmed in the making of the film.
During the Quidditch World Cup, you can briefly see Dobby, at this point a free elf, riding a llama in all the excitement. He can do whatever he wants, after all!

In real life, the actors who play Bill Weasley (Domnhall Gleeson) and Mad-Eye Moody (Brendan Gleeson) are father and son. Aw!
The Beauxbatons girls in the audience of the arena during the third task in Goblet of Fire can be seen dancing a very familiar dance... That's right. It's the Macarena!
Shirley Henderson, the actress who played Moaning Myrtle, the 14-year-old witch who became a ghost when she died, was actually 37 years old at the time of filming. You might also remember her as Bridget Jones' best friend Jude in the Bridget Jones' Diary series.
That weird hug between Draco Malfoy and Voldemort was weird for a reason. It was improvised, Tom Felton wasn't expecting it, and so he just kind of froze in the moment. His weird reaction was left in the film.

When Hagrid takes Harry to the Leaky Cauldron for the first time, they meet Tom the innkeeper. A couple years later, in Prisoner of Azkaban, Harry meets Tom again, only he looks a bit...rougher.
At the end of Chamber of Secrets, Emma Watson is supposed to hug both Harry and Ron, but she was super nervous and only hugged Harry. They kept her nervous hesitation in the movie.
In Prisoner of Azkaban, you can see Buckbeak poop on screen! That's it. That's the whole fact.

In the final shot of the final film, you can see that Harry's scar, which doesn't bother him anymore, has nearly faded away completely.
Seven is a very important number in the Harry Potter universe. Everything is in sevens. Of course, the 7 Horcruxes, but... There are also 7 locks on the chest that kept Mad-Eye Moody captive. 7 decoy Harry Potters during the plot to escape the deatheaters in Deathly Hallows Part 1. 7 players on a Quidditch team. 7 snakes on the door to the Chamber of Secrets, Harry’s Quidditch jersey number is 7, Ginny is the 7th Weasley kid and the first girl in 7 generations, And of course, there are 7 books in the series. Safe to say, 7 is J.K. Rowling’s favorite number!
Ron’s patronus is a Jack Russell terrier, and Hermione’s is an otter. Jack Russells are known for chasing otters, and otters are part of the weasel family, perhaps letting us in on the fact that she will become part of the Weasley family later on.
Remember how Harry lets a chocolate frog loose on the Hogwarts Express in Sorcerer’s Stone? Well, that frog (or maybe its spawn) comes back in the last few minutes of the last movie. When Harry’s kids are on the train, they find a chocolate frog just hopping around.

In Chamber of Secrets, when Lockhart tries to flee Hogwarts, he has also fled his painting.