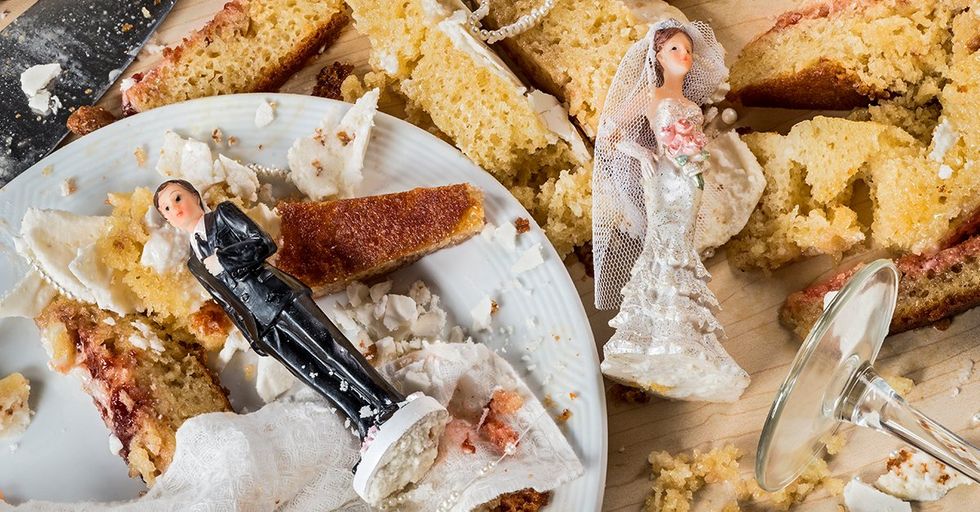 Weddings can be a complex affair. Planning a big white wedding takes a ton of work from everybody involved in the process. Because there are a million little decisions to make, and that's before the big day even arrives. When it does, you just want everything to run smoothly. Unfortunately, not everybody can go along with that idea.

Traditionally, the maid of honor helps organize the other bridesmaids. They plan bachelorette parties and bridal showers and are the bride's rock on her wedding day. However, not every maid of honor can pull that off flawlessly...or at all.

Take one wedding in Florida, for instance. The maid of honor trashed her friend's wedding instead of helping it. You won't believe how insane this story is until you read it for yourself!

Weddings take a lot of effort.

Yes, it's about celebrating the love between two people. But depending on how elaborate of an event it is, the number of decisions and tasks to accomplish can be overwhelming.

And sometimes that work doesn't even pay off.

Recently, Jennifer Butler got married in Punta Gorda, Florida. But when it came time for the reception...things went downhill.

It was supposed to be one of the happiest days of her life.

Instead, she got copious amounts of mayhem when her maid of honor got drunk and wrecked the reception.

Here's how it went down:

Maid of honor Amanda Willis “drank almost a whole entire bottle of Fireball" within the first hour of the reception. And apparently, she's not a fun drunk to be around.

Some people get happy and giggly, some people fall asleep...

But when Amanda Willis got drunk, she just got violent. “She was drunk within 20 minutes to a half an hour," Jennifer Butler told NBC2.

First up on Willis' drunken to-do list: something illegal.

According to guests, she began demanding that various guests give her their car keys. When that didn't work (for obvious reasons), she stole car keys instead.

Aren't maids of honor and best men just supposed to share a dance?

Willis didn't get that memo, though, because she stole car keys from the best man, and brother of the groom, David.

And then she went for the car.

One wedding guest, Robert Templeton, saw it happen. “She just went up to the best man and grabbed his keys out of his pocket and jumped in his car," he said. From there, Willis attempted to drive out of the parking lot.

This is the part where she almost hits the best man with his own car.

Butler managed to grab the car, getting dragged for a few feet before he was able to climb inside and pull the emergency brake.

This is a wedding, not Grand Theft Auto.

According to the bride, Willis was then "wrestled from the car." Afterward, she went back into the reception hall and “grabbed up the big bottle of Captain Morgan and just guzzled it..."

Also, it's probably a bad idea to chug like you're at a college party.

It looks like Captain Morgan didn't agree with her, because after that she became violent, even punching Templeton in the face.

Apparently, she had some score to settle.

As Templeton puts it, "As soon as I turned around, she came up and cracked me upside of the face."

Soon after, the deputies were called.

When police arrived on the scene, Willis claimed to be having an asthma attack and started shaking as if she were having a seizure.

So she was taken to Bayfront Punta Gorda hospital.

At the hospital, Willis exposed herself to deputies, assaulted two medics and kicked over her bedpan.

And this wasn't her first run-in with the law.

This arrest is Willis' ninth in Charlotte County, and she's facing charges of larceny, battery, grand theft of a motor vehicle, and violation of probation.

All that is kinda hard on a friendship.

Now, Jennifer Butler says that the two are no longer friends. And honestly, that decision is pretty understandable.

Nobody should have to deal with that on their big day, especially not from someone they trust. But that isn't the only wedding horror story out there...

This wedding had an all-out brawl!

The sister of the bride, who wasn't invited, showed up drunk and got in a fight with the bride until the father of the bride broke it up by putting the sister in a choke hold, and dragging her out of the venue. The bride was surprisingly fine afterwards. Source: I'm a wedding caterer. -paulsmith4908

My mother in law handed out an EP of my now sister-in-law to as many guests as she could & threw a fit in the middle of the dance floor later that night because I didn’t let her daughter sing with the band or karaoke. Her exact words were, “How dare you make today all about you."

It was MY wedding day. -mrsmx

I worked weddings for a living and once saw the best man get loaded, give a speech, and profess his love of the bride and how they had slept together two nights before. Open bar: 1, best man: 0. -cjbeck71081

What kind of weird prank is this?

Just prior to my sister's wedding ceremony beginning, as everyone was getting in place and last minute things were being done in this big old Catholic Church, my father noticed a woman with a confused look at the back of the Church and approached her, asking if she needed anything.

She informed him she was the BRIDE, then opened a beat-up suitcase she had which contained something resembling a wedding-type dress. My father, suspecting she had some mental health issues, played along, suggesting that she may be in the wrong church. When that didn't work, he slipped off and called the police. In the meantime, the lady walked up to my soon to be brother-in-law and said: "You aren't going to leave me this time."

When the police pulled up to the Church, the lady spotted them and made a quick exit. Turns out she had a habit of pulling the stunt.

My brother-in-law still occasionally reminds my sister that he had a choice on their wedding day, but still chose her. -longsteved

Well...at least it worked out in the end?

The bride never showed up.

My cousin was the groom and had about 500 people in attendance. He got on the mic and said there's no bride, so we had the party anyway. He married someone else 2 years later. -PM_ME_UR_HAIR_COLOR

Bridal face plant followed by a girdle breaking which led to the dress ripping. -RedIcingGuy

Okay, this is one interesting job to have.

I worked at a wedding venue for 4 years.

Having to stop a bride's stepdad from hitting her over the head with a chair was a highlight. The whole room was just fighting with each other, the best man kicked the mother in law.

Different wedding, some dickhead bit the DJ because he refused to play a certain song.

For me the absolute worst one was when the newlyweds were arguing at the end of the night, in front of their young son, she admitted to cheating on him. It all came out there and then in front of his family and he was devastated. –anonymous

There was this guy outside of the hotel walking up to groups of people in the smoking area, asking how much each person weighed. He was very overweight himself, and his jeans looked to be on inside out. He was severely underdressed for the occasion, and no one seemed to know him. Anyways, he would ask a person their weight, and then exclaim "I can bench that!" Until one guy (I think he was a family member of the bride) got into an argument with him and started asking around if anyone knew this person, figuring that he was a wedding crasher. That's when this gentleman decided to cut a deal with everyone. "If I can pick up that bench with my bare hands, can I stay for the party?" To which everyone agrees, because the bench was clearly bolted to the ground. So, he walks over, puts his hands on the bench, crouches down, and with all of his might... poops his pants in front of everyone. He stood up and waddled off through the parking lot to never be seen again. I did hear throughout the night people talking about a guy who was on shrooms outside, trying to lift a bench. So, I guess he was also tripping balls. -MangeStrusic

The groom was drinking heavily and by the time the cake was supposed to be cut, he was passed out at the back of the room. The bride was crying hysterically. Dad stepped in and cut the cake with the bride. Former Maitre d'Hotel. -Rosiebelleann

Bride's step-mother and mother got into a fight. Step-mother bit the mother. Wedding went to a screeching halt. -PM-ME-ELEPHANT-JOKES

There was like an 8-year-old boy who had loads of confetti in his hand so I didn't think much of it, turns out he thought it was sugar paper and ate all of, he then proceeded to projectile vomit everywhere through the middle of the ceremony. Was one of the funniest and most disgusting moments of my life. -theorangepanda99

This is pretty bad planning on the groom's part.

After arriving 45 minutes after the ceremony was to begin, during the ring exchange, the groom gets this blank look and says he didn't know he was supposed to buy her another ring. Sister-in-law slipped off her wedding band and handed it off to the preacher. -jlmccuan

I was at a wedding where one of the bridesmaids had gotten married a month earlier and thought it was a good idea to change out of her dress into her wedding dress for the reception. We in the wedding party told her to change back. She decided to stand at the head of the buffet line and tell each and every one of us as we came through the line how she felt. F-you, I f-ed your husband. It goes on and on. Booze was involved so you can imagine how it was. She refused to change out of her wedding dress until one of the other bridesmaids locked her in the bathroom and told her to change or it was going to get physical. She changed and left not long after. The rest of the reception was a fantastic time. -hillbillytendencies Are these stories crazy or what? Share them with your friends!