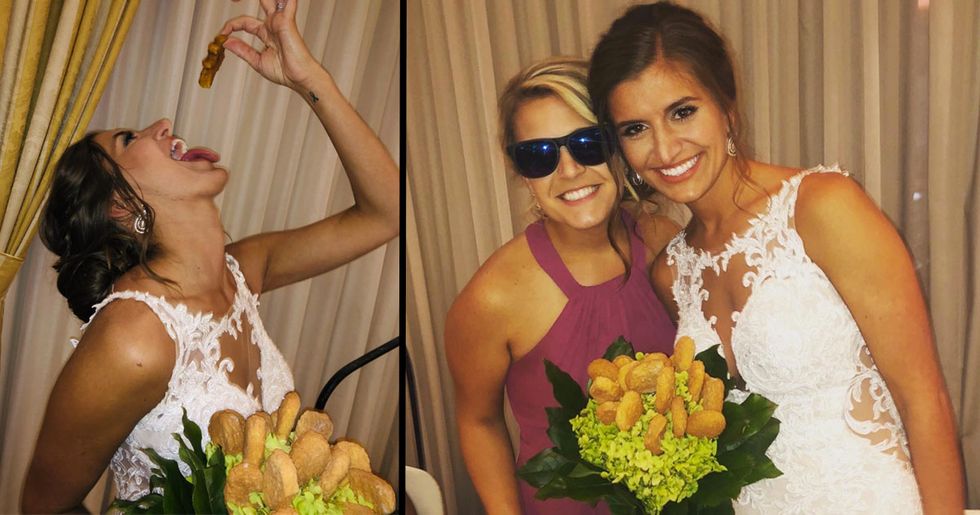 Weddings are expensive. There's a mountain of things to arrange, and they end up all looking fairly similar.

We all know weddings require a lot of standing around and waiting to be fed.

A bouquet of chicken nuggets is a great way to curb those mid-wedding hunger pans.

And because the salty fried bites are masked in your bouquet you won't look like a greasy pig!

Honestly, it's hard to tell whether Blair is happier with her chicken nugget bouquet or her groom.

But one things for certain, her devotion to chicken nuggets paid off...with her getting a truly special wedding gift from nugget manufacture, Tyson.

Check out this truly wonderful wedding inspo below.

Although not affiliated with the chicken nugget manufacturer Tyson in any way, it was a funny coincidence for Blair that her beau shared the same name as her favourite chicken dinosaurs.

It's no surprise that Blair Hardy's maid of honour thought of incorporating the tasty snack into her speech.

Jenna came up with an ingenious nugget plan.

Revealing her thought process to Insider, Jenna Spetz explained: "[Blair] has always LOVED dino nuggets and was marrying a man with the last name Tyson, so it really was a match made in heaven,"

Blair's cousin Jenna, struggled to keep the big secret but she held her tongue. Even during the wild bachelorette party, Jenna managed to keep her brilliant plan under wraps.

Jenna wanted to get in touch with the food manufacturer, Tyson.

At first, she didn't know how she could possibly get hold of someone that could help, or how to even contact the people that made her friends favorite nuggets.

Jenna could have tried getting in touch with the chicken people through Twitter...

Hey @Wendys I’m really trying to spice up my dorm room with a spicy chicken nuggets poster. You tryin to hook a brotha up?
— Kyle Shaffmaster (@Kyle Shaffmaster)1571020663.0

But instead, she decided to email Tyson food manufactures and explain to them her plan.

This surprised the maid of honor who confessed, "I really didn't expect my inquiry to go any further than an auto-reply from customer service."

Being a maid of honor comes with a lot of pressure.

So it was a relief for Jenna when the good people at Tyson foods got back to her and said they would be more than happy to help out with her nugget related plans.

Tyson even offered to make the bouquet.

As wonderful as the chicken nugget bouquet was, that was only the beginning of Jenna's nugget surprise.

Jenna's speech blew everyone away.

Jenna planned everything down to a T. To keep Blair from seeing the bouquet, Jenna had her wife keep it under wraps in a box. Before the reception commenced her wife hid the box behind the stage ready for Jenna's big moment.

Clearly chicken nuggets are the way to this girl's heart.

An embarrassed Adam couldn't take his bride's bouquet seriously. Although even he couldn't deny how wicked the other part of Jenna's surprise was...

"Listen up everyone, there's more..."

During Jenna's heartfelt speech about her beloved cousin Blair, she passed the new bride a very special letter.

"We heard from a little birdie..."

Tyson was clearly very moved by Jenna's correspondence with them. So moved in fact that on top of making the bride a chicken nugget bouquet,  they also promised to give her a year's supply of nuggets.

What does a year's supply of chicken nuggets look like?

Well, I suppose it looks a little something like that in the above pic. Blair and Adam are going to need to invest in a big freezer.

This has certainly helped Tyson's reputation.

I mean, truth be told this chicken nugget manufacturer is notorious for being the pinnacle of processed garbage.

But eh, they can sure make a pretty bouquet!

Maybe the chicken nugget company should consider getting into weddings full time. You could have Tyson chicken nuggets wedding cakes, bouquets, cocktails... Heck, they could even provide crispy bits to replace the tradition of rice.

I mean let's face it, they're no Popeyes.

Remember when Popeyes completely ran out of their chicken sandwich this summer because people were buying so many of them? They were so good people were willing to sit in drive-thru queues for hours on the off chance of maybe getting their hands on one.

Those guys really know what they're talking about when it comes to chicken and batter... Imagine if Popeyes provided a wedding package? The world would probably stop turning.

But for Blair, there is only one winner when it comes to her chicken dinner...

...and that's the salty, salty taste of Tyson's nuggets. I'm sure glad Blair got her dream come true on her wedding day. You know, it seems chicken really does bring people together. Continue scrolling to learn all about the best friends that celebrated twenty-three-years of friendship with chicken wings and beer...