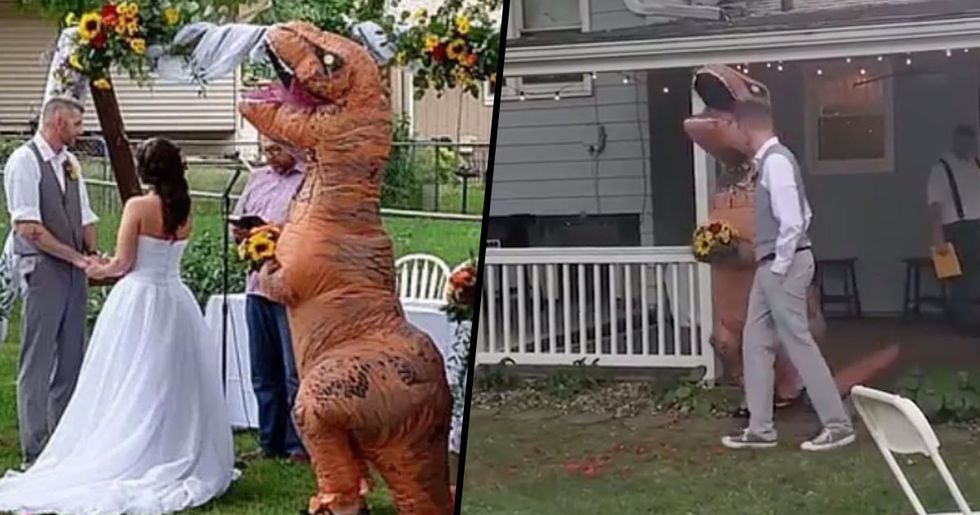 There's a joker in every family, right? You know, the one that probably has never given you a straight answer in their life. I'd say that, in my family, the joker hat goes to my dad, whose middle name should probably be "wisecrack." That being said, if I told my dad that he could wear whatever he wanted to my wedding, I'm pretty confident that he would turn up in a suit and tie.

That is not what happened when Deanna Adams told her bridesmaids that they could wear whatever they wanted to her big day... her sister and maid of honor, Christina Meador, took the memo and ran with it. This is the story of the T-Rex maid-of-honor - do I hear Hollywood calling? There is certainly a Rachel Adams wedding rom-com in there somewhere.

Being a bit of a tomboy meant that I always hated going to weddings.

Once, I was asked to be a bridesmaid for one of my uncles' weddings. I refused to wear a dress, so my mom made me wear a very unflattering lilac suit. I think that, for all the attention that it drew, I would have sooner have worn the nasty, pink, poofy thing. I think that many people struggle with sourcing the right wedding attire when they don't like to dress up. Young Idgie from Fried Green Tomatoes feels, right?

If you don't like dressing up, weddings can be stressful.

There's nothing worse than trying to walk normally in heels, parading down the aisle in a big poofy dress that you didn't choose, while your extended family and loads of strangers ogle from the comfort of their spectator seats. Not that I didn't love my sister's wedding. It was great!...

What I'm getting at is that, maybe, dressing up in actual dress-up is more chill.

If you're going to feel stupid, you may as well feel stupid dressed "intentionally" stupid. Do you get what I mean? Kind of like if you feel like you're going to be the butt of a joke, crack the joke first - then everyone's laughing!

Gaining self-confidence is a hard battle.

For people that don't like to dress up all fancy and don't like to get their picture taken, weddings are difficult stomping ground. I could count a number of necessary social occasions that I'd much rather wear a mask to than not - which makes me think that perhaps the whole T-Rex wedding suit is not all that bad of an idea after all.

Is a T-Rex costume a bit much, though?

I hear you, and I know there's going to a lot of people that consider Christina's decision to wear a T-Rex costume to her sister's big day as a bit of an attention grab.

Not all siblings fight for attention...

But there are some siblings that never lose their competitive edge, but, as adults, being the center of attention isn't always necessarily a good thing.

I certainly catch my mom and dad's attention when I do something wrong.

I swear, sometimes, not being the center of attention is a good thing. If no one has to worry about you and you're able to go about your day-to-day without concerning anyone or causing anyone distress then you're winning, right?

Saving face is the adult version of scrapping for attention.

If wanting to be the center of attention is Tic Tac Toe, then saving face is Texas hold 'em.

In the case of the T-Rex costume, both sisters have insisted that it was not about stealing attention.

When Deanna first told her sister that she was getting married, the two sisters joked about Christina's possible maid-of-honor costume ideas.

According to the Daily Mail, Christina explained to FEMAIL that "knowing that I'm not a big fan of wearing formal dresses and that I probably wouldn't have a lot of money to buy something really nice, reassured me by letting me know that I could pick out any outfit that I choose."

These sisters have got each other's backs.

Isn't it nice to hear about sisters that genuinely only have each other's best interests at heart? Deanna didn't care what Christina looked like in front of all her wedding guests so long as she was comfortable.

"I was trying to think of something that I would be willing to wear more than once..."

I mean, I don't know how many times you could wear a T-Rex costume, or rather, how many occasions would come up that would warrant wearing it, but I guess that if you can wear it to your sister's wedding, maybe you can wear it literally anywhere - to the dentist, a baptism, a funeral (too far?), a kid's party (actually appropriate), the cinema (maybe if you're watching Jurassic World...,) the park, etc.

I always wanted one of those glass toasters. You know the ones that you can see the bread toasting through? I got one and, I'll be honest, it wasn't all that I thought it would be. Explaining the desire to opt for a dinosaur costume, Christina said: "Well, she did say anything, and if I'm spending more than $50, I want it to be a dinosaur costume because they're fantastic and I've always wanted one."

Deanna gave her the all-clear to go ahead with the unusual costume... or, at least, that's what Christina thought.

Going back to what I was saying earlier about never being sure whether the family joker is being serious or not... when Deanna received a text from her younger sister saying that she was going to dress as a T-Rex to her wedding, you can bet your bottom dollar that she didn't think that she was being deadpan serious.

"I sent her a text so that she could have a laugh - surprisingly she was ok with it!"

Hmmm, I mean, what would you reply if someone texted you saying that they were going to dress up as a T-Rex for your wedding? Thumbs up emoji? Monkey-covering-eyes emoji? Laughing-with-tears emoji? Or straight-up thumbs down emoji?

It was only when Christina arrived with the costume a few days before the wedding that her sister started to believe her.

When Christina arrived for the dress-fitting in Nebraska a few days before the ceremony, she brought along her alternative costume. Recalling her sister's reaction, Christina said: "My sister picks me and my mom up from our hotel to go to a final dress fitting, and I bring it up on the ride that I had bought it and plan to wear it, and she laughed."

Deanna still didn't think that her younger sister would seriously wear it.

Deanna was all "sure wear it, I don't care" and Christina was all "well, okay then, maybe I will wear it," to which Deanna would respond with, "good," with Christina getting the last word, repeating "good."

This is classic sibling saving face - we're too old to squabble now so, instead, we all just act so not bothered about everything just to inadvertently annoy each other. It's all very confusing.

So Deanna's big day rolled around and Christina, true to her word, wore the T-Rex costume.

As you can imagine, some of Deanna's guests were quite confused about the costume. Christina recalled, "I remember being surprised that everyone seemed to be doing their best to avoid noticing the elephant in the room (or should I say dino) but it was hard to see in the costume."

The T-Rex costume was too hot to wear throughout the whole day.

I mean, an inflatable T-Rex costume isn't exactly going to keep you cool. After the ceremony was over, Christina slipped out of the T-Rex costume and wore a simple dress that she had got in a thrift store for $25.

After Christina shared pictures of the wedding on Facebook, the story went viral.

The story was shared on Reddit and spread across the world. The original post that Christina made has 35k shares and over 5k likes at the time of writing.

The sisters were both surprised that the story captured so much interest.

When Christina initially wrote the post, she didn't expect it to go viral, she just intended it to be seen by family and friends. She told the Daily Mail that "a couple of people asked if they could share it, and with my sister's permission I posted it on my Facebook page and allowed the closed group members to share from there - and then it got way bigger than expected."

Plenty of people saw the funny side of Christina's costume.

Thousands of people have tagged friends in the post, saying things like "can you imagine," "that would be so funny," and "do they have it in pink?" Christina was happy to receive these comments and stated that "it's nice to see that most people get it."

Unfortunately, not everyone saw the funny side.

Some people accused Christina of stealing her sister's limelight on her wedding day and said the costume was inappropriate. Not that this really bothered Christina, who said that "the few who didn't [get it] were at least just showing concern for my sister's feelings (not knowing her or the situation)."

Fortunately, Deanna had her sister's back and stood up to the haters.

Replying to a negative comment, Deanna said, "It's not a joke, it's a giant middle finger at spending thousands of dollars and putting ungodly amounts of pressure on ourselves just to please a bunch of people who, in the end, only want free food and drinks."

"The point was to get married to the man who treats me like I hung the moon, and we did that part."

Aw yeah, you tell the haters, Deanna - that is what's important. You know, I really like this family's attitude and Deanna and her husband look really nice together.

"My sister is awesome."

Deanna made sure that anyone skeptical about whether she was okay with her little sister wearing the T-Rex costume understood that she was one hundred percent down, posting on Facebook: "My sister is awesome and I genuinely was not kidding when I said she could wear whatever she wanted."

Who knows? Maybe Christina will have started a new trend. Perhaps I'll go to my next wedding dressed as a sad singleton that's magnetized towards the buffet table...