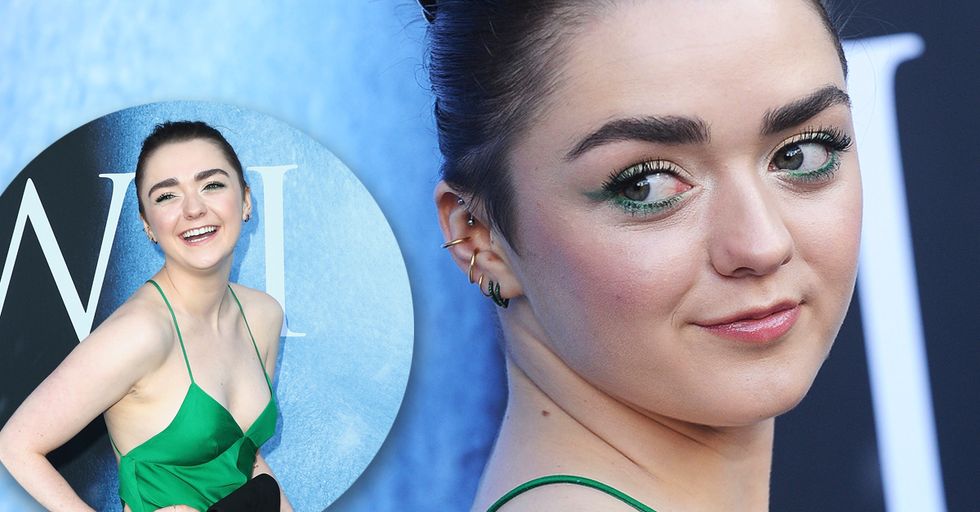 Do you know who Maisie Williams is?

If not, please run – don't walk – run to your nearest computer and look up Arya Stark, the baddest of badasses to come out of Game of Thrones. Sure, other people in Westeros are stronger, faster, more intimidating in person, but Arya, she's a special case.

Arya is a killer in the purest sense of the word. I'm going to go vague here so as not to give any spoilers to any of you that haven't caught up on your GOT, but long story short, Arya's list of enemies – the one she always keeps mumbling – well, it gets shorter with every episode, because again, Arya is a killer.
In fact, her very appearance is calculated to make her even more deadly. Arya is small and plain. Unlike her red-headed sister Sansa, she can easily blend in with a crowd – which only makes her all the more effective.
To witness Arya in action is to witness suspension of disbelief at its highest height. When we watch GOT, we believe that the pint-sized powerhouse is able to take on men much bigger and stronger than herself and win.
Arya is a testament to determination and persistence against all odds. She's goddamned icon, and it's no surprise that Williams, the actress that plays her, is a crowd favorite.

Unfortunately, however, Williams has some doubts about her acting career – specifically, the roles that she'll be allowed to play once GOT is over.

In speaking to the Irish Times, she said, "It’s only now I’m starting to realize the characters that are available to me because of the way I look and the characters that aren’t available to me."
"I don’t look like someone who is cast in roles that are, well, sexualized," she said, further adding that she was "completely in awe" of Hollywood's "jaw-droppingly beautiful" actresses.
While this is an extremely legitimate concern – especially in light of recent revelations about Hollywood's extreme sexism – we're pretty sure Williams will be quite fine. After all, there are a ton of leading ladies who aren't considered classically beautiful.

Kate Winslet, for instance, was told to expect only the fat girl roles, and yet wound up as the leading lady of Titanic, the biggest movie of all time. Actress Sally Hawkins, the lead of The Shape of Water has a delicate, fragile beauty that is not the in-your-face buxomness Hollywood expects. And what about Maggie Gyllenhaal of Secretary, and Meryl Streep of well, Meryl Streep? She was told she was too ugly. So was Meghan Markle, and now she's about to become a princess.
All these women are not what is considered the height of beauty now, and yet they are undoubtedly beautiful. Beauty is in the eye of the beholder, as they say, and more to the point, beauty norms change across each culture and era. So Williams may think she has a rough road ahead of her, but we're pretty sure it's going to be okay.