Big Name Celebrities Who Have Killed Someone | 22 Words 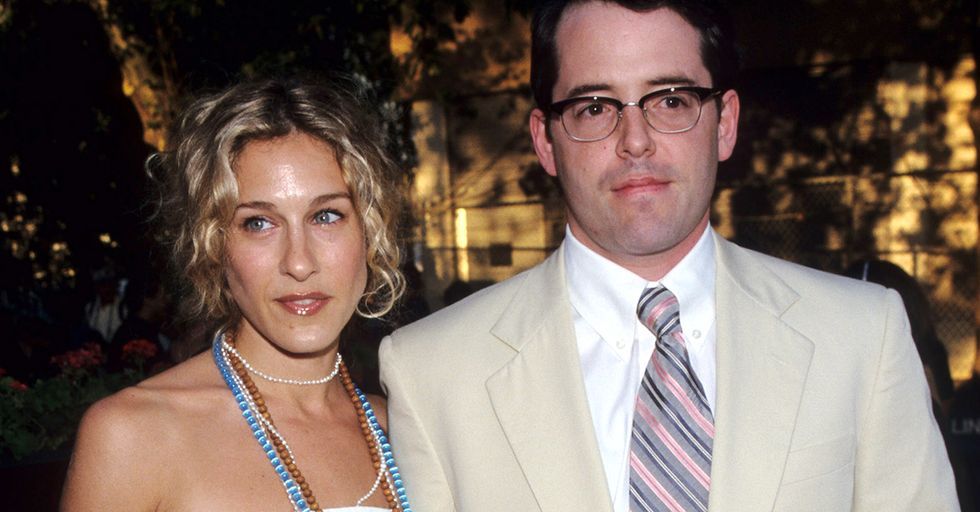 Big Name Celebrities Who Have Killed Someone

Celebs, they're truly just like the rest of us.

They eat, drink, and oh, sometimes they kill people. Most times it's a car accident, and every once in a while, it's a deliberate murder.

Here are 10 celebs who have killed people:

In 1978, Sex Pistols bassist Sid Vicious and his girlfriend Nancy Spungen epitomized the sex, drugs, and rock and roll lifestyle. Then, on the night of October 11, 1978, Spungen was found dead, stabbed in stomach.
Vicious claimed at first that he'd found her that way, but he later admitted to stabbing her in the stomach. He was charged with murder, but he never stood trial, however. He died of a drug overdose while out on bail.

Can you see innocent-faced Matthew Broderick as a killer? Neither can we, but the facts are that the one-time Ferris Bueller star killed a pair of people in 1987.
Both Broderick and his girlfriend at the time, Jennifer Gray, were vacationing in Ireland when he mistakenly drove onto the wrong side of the road and smashed into an incoming car. The car's driver and passenger. Anna Gallagher, 28, and her mother, Margaret Doherty, 63, were pronounced dead on arrival at the hospital. Broderick was initially charged with causing death by dangerous driving and faced up to five years in prison, but was eventually convicted of careless driving and fined $175

Another star that had a fatal accident was tennis icon Venus Williams. Read on to find out what happened...
In June 2017, Williams was in Palm Beach, Florida, driving her Toyota Sequoia SUV when another car crashed into hers at an intersection. The car's driver, Linda Barson, survived, but her passenger, her 78-year-old husband, Jerome Barson, later died at the ICU. Williams was initially suspected of turning into the intersection without right of way, but was later cleared of any wrongdoing after authorities obtained a surveillance video that showed she wasn't at fault.

Former pop princess Brandy Norwood was part of a multi-car collision that left a mother of two dead and her children injured.  On December  30, 2006,  Norwood lost control of her Land Rover on the 405 freeway in Los Angeles when a nearby car swerved into hers.
She slammed into a Toyota Corolla driven by Awatef Aboudihaj, a 38-year-old wife and mother who later died. Aboudihaj's two children, who were also in the car, had minor injuries and made a full recovery. Brandy was reportedly devastated by her part in the accident. She eventually reached a settlement with Aboudihaj's widower, which wasn't made public.

Legendary fight promoter Don King killed not one, but two men. The first was an accident, King killed a man trying to break into his place of business. In 1954, King shot Hillary Brown in the back when the man tried to break into one of his gambling houses. The incident was deemed a justifiable homicide.
The next death, however, was not so innocent. King stomped his employee Sam Garrett to death. Why? Because Garrett owed him $600. King was convicted of second-degree murder, but the judge lowered his conviction to non-negligent manslaughter, which meant King received only four years prison for his violent crime. To make matters worse, Cleveland named the street where King killed Garrett Don King Way. Only in America. This next one involves a major reality star...

Caityln Jenner has been everywhere recently, ever since she came out as being transgender. Not all of her attention has been positive, however. In February 2015, Jenner was involved in a fatal multiple-vehicle collision. She rear-ended a car on the Pacific Coast Highway in California, slamming it into traffic, where it was then bulldozed by an incoming car.
The other car's driver, Kim Howe, an animal rights activist and actress, was killed, and seven other people gravely injured. Devastated, Jenner released a statement saying,

My heartfelt and deepest sympathies go out to the family and loved ones, and to all of those who were involved or injured in this terrible accident. It is a devastating tragedy, and I cannot pretend to imagine what this family is going through at this time. I am praying for them. I will continue to cooperate in every way possible.

Bollywood actor Salman Khan is one of the biggest stars in the world, although he is a virtual unknown in the United States. He's also killed people.
In 2002, he drove his car into a group of people sleeping in front of a bakery, killing one person and injuring three others. Khan was reportedly under the influence of alcohol. 13 years after the crime, he was finally convicted of culpable homicide and sentenced to five years in jail.

We all know Snoop is a master of the rap and the cooking game, but did you know he was also once on trial for murder? Read on to find out what happened...
Snoop and his bodyguard McKinley Lee were charged with of conspiracy to commit assault in the case of the August 1993 death of Philip Woldemariam. On October 25, 1993, Snoop and Lee went to the Woodbine Park section of L.A. to talk to a man who'd had an earlier confrontation with a friend of Snoop's.  Woldemariam, 20, an Ethiopian immigrant, reached for his gun as he approached Snoop's car. Lee fired two shots at him and then fled the scene with Snoop. Woldemariam later died. Johnny Cochran tried the case and Snoop was cleared of all charges, although he spent months on house arrest. Snoop credits the case with forcing him to change his ways.

On June 17, 2013, Odin Lloyd, a linebacker for a New England Football League (NEFL) semi-professional team called the Boston Bandits was found shot to death in  North Attleborough, Massachusetts. Suspicion soon fell on Aaron Hernandez, a professional football player who had accused Lloyd of breaking his trust.
According to First Assistant District Attorney Bill McCauley Hernandez "drove the victim to the remote spot, and then he orchestrated his execution." Hernandez  was found guilty of first degree and sentenced to life in prison without possibility of parole, but was later acquitted. He committed suicide in 2017, and was found to have severe CTE.

One of the most famous celebrity murders and the subject of numerous documentaries, films and other projects was the murder of Nicole Brown Simpson and her friend Ron Goldman, presumably by her husband, football hero OJ Simpson.
On June 12, 1994, Nicole and Goldman were discovered stabbed to death outside Nicole's condo in Brentwood, a posh area of Los Angeles. Simpson was a person of interest and led police on a low-speed pursuit in a white Ford Bronco SUV. The trial was one of the most sensational in American history. Simpson was represented by Johnny Cochran and acquitted of the murder charges, although he later went to prison on an unrelated armed robbery and kidnapping charge. Bet you didn't know that this famous politician's wife once killed someone. Read on to find out...

Laura Bush has a distinguished pedigree. She is the wife of the 43rd president of the United States, George W. Bush, and was also First Lady of Texas from 1995 to 2005. But did you know she once killed someone by accident?
On November 6, 1963, only two days after her 17th birthday, Bush ran past a stop sign and hit another car, killing the driver, her classmate and close friend, Michael Dutton Douglas, who was rumored to be her boyfriend at the time, although she denied it. She was never charged, and she and her passenger only had minor injuries.

The now-deceased Ted Kennedy, youngest brother of President John F. Kennedy and Senator Robert Kennedy was once the most prominent Kennedy in Washington, having served for 40 years. He also killed someone.
On July 18, 1969, Kennedy was in Martha's Vineyard, hosting a party, when he left with 28-year-old Mary Jo Kopechne. As he tried to cross Dike Bridge, he lost control of his car, which went crashing into the Poucha Pond inlet.
Kennedy fled the scene, but Kopechne died in the overturned vehicle. He did not report the death for nine hours, and was given a two months suspended sentence for fleeing the scene of an accident. The incident became known as the Chappaquiddick incident. Read on to find out which major rockstar hit and killed his bodyguard...

The legendary drummer of the Who, Keith Moon saw a lot of success during his day. He also saw a lot of tragedy as well.
On January 4, 1970, Moon was trying to drive away from a pub where he was being harassed by patrons when he drove over his friend and bodyguard, Neil Boland, who he did not see on the road. Moon was under the influence at the time, and he was charged both with that and driving without a license and insurance. The death was ruled an accident, but it haunted Moon until his death eight years later at the age of 32.

You remember Howard Hughes, the eccentric billionaire played with aplomb by Leonardo DiCaprio in the movie The Aviator. Hughes, who famously suffered from OCD, was once in a fatal car accident.
The aviation pioneer was driving erratically on July 11, 1936 when he struck and killed a pedestrian named Gabriel S. Meyer. The entire incident was then finessed by Hughes' lawyers. Though Hughes had been drinking, he was declared sober at the hospital, and a witness later changed his story to say that the man had stepped in front of Hughes' car. Hughes was blamelessly released from the coroner's inquest.

Do you remember James Stewart? One of the greatest movie stars in history, ranked only behind Humphrey Bogart and Carey Grant, Stewart is most recognizable for his roles in films such as The Philadelphia Story. Read on to find out about his military training...
Before Stewart was an actor, however, he was a pilot in the U.S. Air Force Reserve, serving during World War II. In fact, he became the first major American star to serve during the war. He also killed people. A lot of people.
Stewart worked as command pilot in the lead B-24 on several missions during which he participated in bombings that led to the deaths of several enemy soldiers and civilians in Nazi-occupied Europe. He received numerous awards for his service including the Presidential Medal of Freedom.

The Mötley Crüe frontman has had a checkered past full of violent incidents, but none come close to the time he killed Hanoi Rocks drummer Nicholas "Razzle" Dingley.
On December 8, 1984, Dingley and two other band members visited Neil in California. The men decided to go get some liquor, and Neil, who was driving, lost control of the car and hit another vehicle, seriously injuring the car's occupants and killing Dingley. Though his blood alcohol level was well over the limit, Neil only spent 15 days in jail for vehicular manslaughter and driving under the influence.

Notorious producer Phil Spector was convicted of killing actress Lana Clarkson by shooting her on February 3, 2003. Though he claimed the death was accidental, a jury sentenced him to 19 years in jail in 2009. Share this story on Facebook with your friends who love true crime!