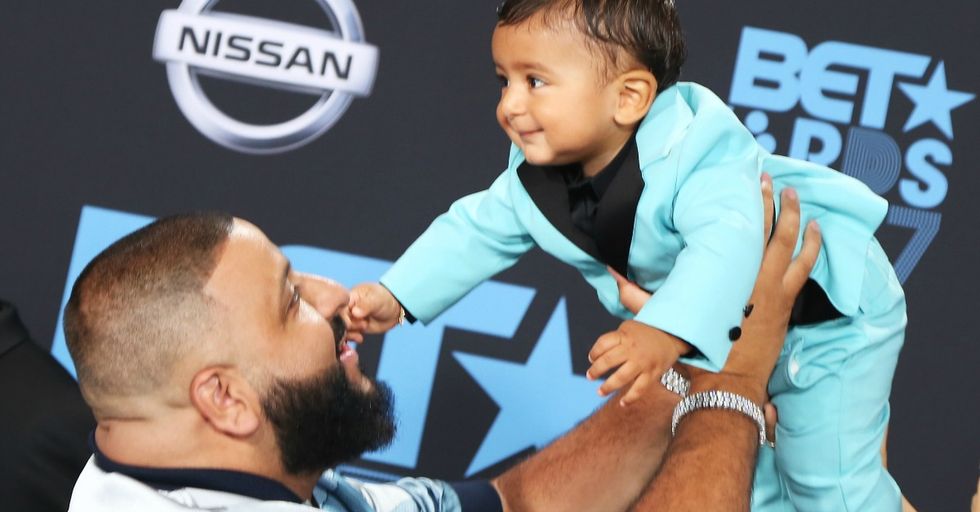 The ever-enthusiastic music producer DJ Khaled rose to fame by making zany and inspiring Snapchat videos. He's known for shouting his catchphrases, "Major Key," "Anotha' One," and most importantly, "DJ KHAAALED" during his Snapchat videos and the songs he's featured in. He's always going starry-eyed over his own kid, Asahd—who has may have the cutest, bougie-est, and youngest  Instagram account  you've ever seen.

Last night at the BET Awards, DJ Khaled brought his son on stage and named him the executive producer of Khaled's latest album, in a loveable and ridiculously cute speech.

Here's an example of some of that classic DJ Khaled inspiration. He loves spewing positive affirmations and advice at his followers and showing them how he's living life to the fullest.

We shouldn't have been surprised that he would be just as enthusiastic about his own son.

Here's a video of Khaled's son, Asahd, running around with a poster of himself on the front of Khaled's newest album, to Khaled's surprise and delight.

Asahd may be the only baby with such a large social media presence.

He's already been photographed for Esquire and Gucci. He basically popped out of the womb with an Instagram account in tact and the kid doesn't seem to be bothered by the attention.

You're about to see a very cute and supportive video that's going to make you want to squish this cutie's little face and hug his dad as well.

Asahd was already on the cover of DJ Khaled's album 'Grateful'.

Last night at the BET Awards, DJ Khaled pulled Asahd onstage and named him the Executive Producer of the album. He said, "I wanna introduce you to my son, my life..."

When he brought Asahd up on stage, DJ Khaled said, "This is the executive producer of the platinum album 'Grateful'". And then he went on to shower him with positive reinforcement.

"Young mogul, you're the greatest that ever did it. You're boss, son. You're a don. You're an icon. You're a legend. You can do anything you wanna do. You'll be the best. God is great. Yes boy yes boy yes boy... I love you."

People loved that DJ Khaled brought his son up on stage.

People loved the speech and connection between DJ Khaled and his son. @MoyaDevon said, "I love the way he speaks positivity over his life."

Twitter user @xoxokiki said, "DJ Khaled's love [for] his baby boy is everything!!" with lots of gushy emojis and exclamation points, which is the appropriate amount of enthusiasm for anything concerning DJ Khaled.

Other people thought DJ Khaled's positive affirmations are a good example for parents and teachers.

#HipHopEd(ucators) you can pour life into your students through positive affirmations like Khaled does to his son #HipHopAwards
— Christopher Emdin (@Christopher Emdin)1507684137.0

While not everyone can live the life of DJ Khaled and Asahd, it doesn't cost anything to give some positive feedback to your students and peers. A little positivity is worth a lot!

Honestly, can we get this speech on repeat and have it played to us every morning?

Because that would have us all feeling a lot better about life. Asahd is going to grow up with so much positive reinforcement and healthy thinking that he won't know what to do with it all.