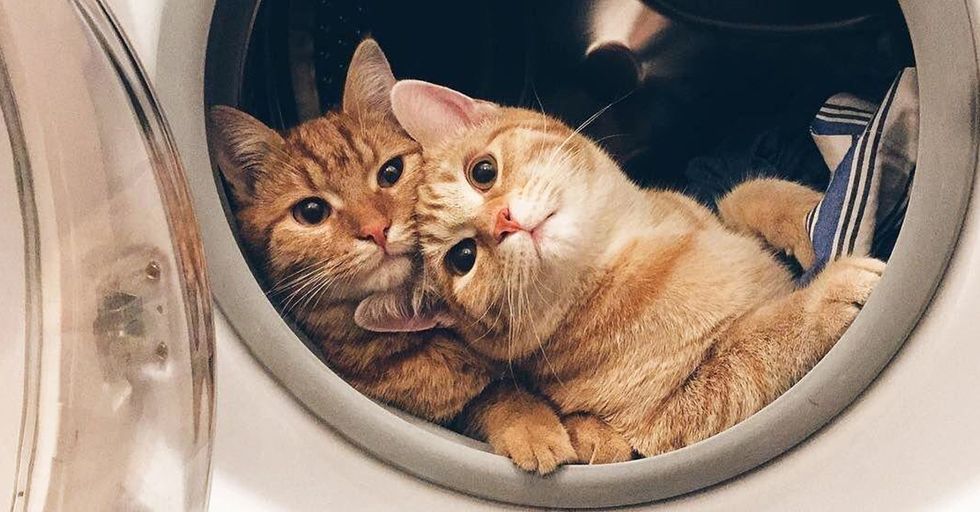 39 Pictures That Will Make You Say 'Awwww!'

Having a bit of a rough day?

Well, get ready, because I'm about to make it approximately 1,000 times better.

The following images are 100 percent guaranteed to melt even the coldest of hearts.

So sit back, relax, and get ready to see some of the cutest pictures you've ever seen in your whole entire life.

She gets on the bus every day and takes it downtown to the dog park. She even has her own bus pass!

A gradient of pups:

Looks like their mom ran out of ink as she was having her puppies. Why can't my printer give me a warning as cute as this?!

This young man FaceTimes his sister from college every week.

Why? To help her with her Algebra homework. (It's OK if you need to wipe your tears before scrolling to the next image. I'm not judging you.)

Your daily reminder that we do not deserve dogs:

Get someone who looks at you like this. (It helps if you carry treats with you wherever you go.) Next up is a heartwarming image of two kids whose innocence will astound you.

These two boys are best friends.

They decided to get the same haircut so that their teacher won't be able to tell them apart. Yep. This is adorable and pure and wonderful.

The zookeepers at the Oregon zoo took Chendra the elephant to meet the other animals there.

She befriended this sea lion named Gus! I like to think they are best buds and they hang out every day.

This little girl is basically in heaven:

This photo is proof that there's no such thing as "too many puppies." Although I would be willing to volunteer in any further experimentation on this topic.

Here's something you don't see every day:

I never thought I'd find a snake adorable. Turns out, all I needed to convince me was a picture of a snake in a hand-knit sweater!

Let me take a selfie:

If you ever find a dog who looks at you the way this pup is looking at this man, you've found a friend for life. And an excellent selfie buddy. This next picture is of an unexpected trio of buds.

Three best friends that anyone ever had.

What do you do when a buck comes up on your deck every day? Give it a bed, obvs!

When he went back to school in his 30's, this guy's grandma started sending him cards.

She sent one every week just to check in! That's a good grandma, right there.

Up on the roof!

Huckleberry here is simply enjoying his time up on the roof. Nothing to worry about!

If cats got married, this is probably what their engagement pictures would look like. 10/10, would frame and hang prominently in my home.

The eyes! The tongue! The kerchief! It's official. There is nothing here I do not like. Wanna see another puppy? Of course you do.

Look how happy he is!

This little pup was just adopted, and he seems to be thrilled about it. Have you ever seen such a smiley pup?!

I'm pretty sure I've seen human parents who are less thrilled about their offspring than these puppy parents are in this picture.

They're hugging! I'm not crying; you're crying.

Would a dog lie to you? Of course not. Dogs can't lie. This next dog deserves all the treats.

What a great idea!

Sometimes you need a fancy bath with fancy soap and lots of bubbles. Other times, you just water to lie down in. Any water.

Still up to the same old shenanigans, I see. I would absolutely watch this movie.

That's it. I'm spending the rest of the day sitting in my driveway and hoping a tiny bunny like this one comes up to me.

This parent puts a note in their son's lunchbox every day.

At parent-teacher conferences, they found out that their son keeps every single one. Don't mind me; I'm just sobbing over here. Want to see some more adorable pictures? You're in luck! They continue on the next page.

I know there have been a bunch of pictures of dogs in this gallery, but make no mistake: Cats are also very adorable. This here is Exhibit A.

The better to hear you with!

I'm pretty sure this dog's ears are the biggest ears that have ever been on a dog. Feel free to send me additional pictures of big-eared dogs, though.

Every dog should have a teeny tiny hat, don't you think? Especially if they smile like this every time they wear it!

This elderly gentleman is donating a bunch of tennis balls to an animal shelter:

Think about how happy all those dogs are going to be! It's basically like Christmas.

It looks like someone has figured out what Santa got her this year. This next picture is almost too adorable.

Based on this picture, I think we may need to change the phrase from "happy as a clam" to "happy as a lamb." (How do you even tell if a clam is happy, anyway?)

This guy built a little room just for his dog!

He even put up framed photos inside! BRB, I need to go adopt a dog immediately. And buy a house.

So that's what those miniature tents you always see at the store are for! Why did I never think of this?

This mattress store gives you a tiny dog mattress whenever you buy an adult-size mattress.

If you're treating yourself to a new bed, shouldn't your pup also reap the benefits? Yes, of course they should.

Think they used enough soap for this bath? Couldn't hurt to add just a tiiiiiny bit more. This next picture is hardcore #CoupleGoals.

Every morning, this lady's husband wakes up and puts birdseed out on the patio. Imagine waking up to this!

Can I keep him?

Why fly when you can hitch a ride on a dog's head? This bird knows what's up.

This cat is so proud of the gifts she brings her owners.

Today it was a particularly large leaf. I get why she's so proud. That leaf is amazing.

If you ever stumble across a view like this, you should probably stop and make sure you haven't magically transformed into a Disney princess.

Have you ever seen a more friendly polar bear? You haven't. I'm sure of it. Share this gallery with someone who could use a smile!