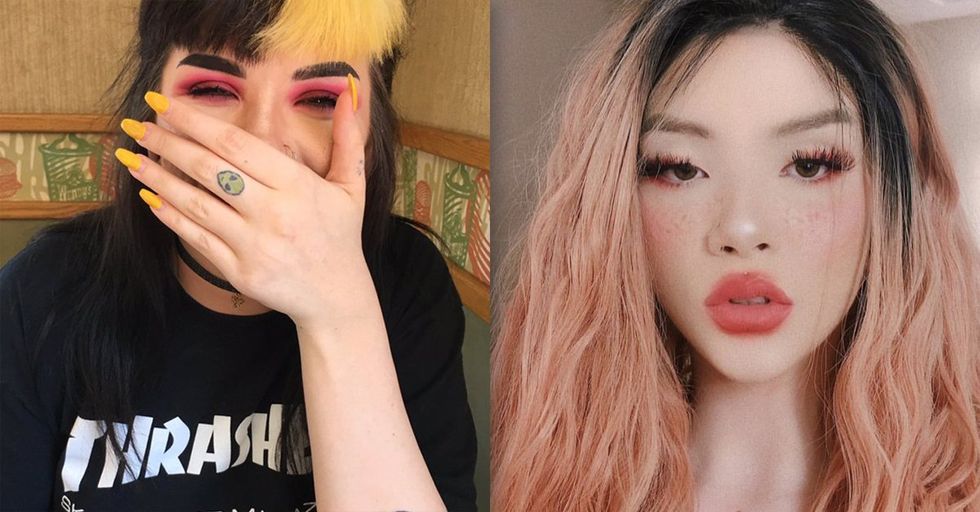 Something is always happening to draw the internet's anger. Recently, one user on Twitter began calling out a makeup artist for her photos. The pictures posted to the woman's Instagram depicted her seemingly Asian features. However, others alleged that she was actually using makeup to appear Asian. Queue a flurry of exchanges between the woman and Twitter users enraged over the discovery.

After all, the concept of 'asian-facing' isn't exactly new. Hollywood especially has a history of casting white people in Asian roles, sometimes using makeup to alter appearances. And every time this happens, it's an insult to people of Asian descent. So, it's not surprising that this furious Instagram-battle took place!

Keep reading to find out how the whole thing unfolded. What's more, explore the history behind this trend and why it is so abhorrent. Word travels fast on Twitter, and this case is no different!

So, ‘Asian-Facing’ is apparently a thing.

And the people of Twitter are not having it.

A makeup artist using the handle @scarebrat had been posting makeup selfies, but the way she was using the makeup was very misleading.

Another user called her out.

Here’s where the tea was spilled:

And as you can see, it immediately caught peoples’ attention.

There was a back-and-forth between Scarebrat and the people of Twitter who flocked to her Instagram page.

…And continued denying it.

Which her critics, in turn, were definitely not having.

Asian users were particularly angry over her ‘Asian aesthetic.’

Monolids are a facial feature mainly held by people of Asian descent, while people of most other ethnicities have double eyelids.

“As an Asian with monolid I’ve been scrutinized for having one, being called a chink or squinty eyes," the Twitter user calling out Scarebrat said.

So it’s pretty clear why this would upset Asian individuals.

As many on Twitter were happy to point out!

At some point, Scarebrat shot back:

She wrote to critics:

I DO NOT GIVE MYSELF MONOLIDS. AT CERTAIN ANGLES MY CREASE IS NOT VISIBLE, AT SOME ANGLES IT IS, THATS JUST HOW MY EYES ARE… it’s not racist to take flattering pictures of yourself.

And neither were the people reading these tweets, who began investigating themselves.

Soon, thousands of people were looking at the pictures.

@rmtracklist She even edited her nasal bone to appear more Asian. This is dedication.
— Lady Bussitdown (@Lady Bussitdown)1541681846.0

Many shared the concerns of the first person who called Scarebrat out.

People wore Scarebrat down to the point where she posted this:

Nothing like an internet-shaming to bring someone to their wits' end, huh?

Someone even translated the Korean phrase in Scarebrat’s bio.

Is this where we say, “be careful what you wish for?"

And the public shaming wasn’t over.

@rmtracklist “It’s not racist to take flattering pictures of yourself” is my absolute fave.
— Selina Kyle (@Selina Kyle)1541654292.0

The “it’s not racist" comment got people worked up.

One user interpreted the text.

Which, if that is what Scarebrat meant, definitely isn't cool.

But not before a number of pictures were captured by critics.

So this particular patch of turbulence is over.

But it highlights a much larger issue.

There’s a long history behind ‘Asian-facing.’

As you likely know, the film industry is a prominent example of this—and demonstrates why this is so offensive to people of actual Asian descent.

Hopefully, we’ll evolve as a culture.

Making Western beauty standards more inclusive and featuring Asian people (among other ethnicities) in media would be a good start.

However, the issue persists.

Fans were outraged when a live-action 'Ghost in the Shell' movie was announced.

Mostly because it featured Scarlett Johansson in the lead role playing a character intended to be Japanese.

‘Breakfast at Tiffany’s’ is great, but one particular portrayal was appalling.

We’re talking, of course, about Mickey Rooney’s character, Mr. Yunioshi. At least Rooney himself admitted that he wouldn’t have taken the role if he’d known it would cause such pain.

How can we forget the critical disaster that was ‘The Last Airbender’?

We’ll let the film review from Roger Ebert speak for us: "The original series Avatar: The Last Airbender was highly regarded and popular for three seasons on Nickelodeon. Its fans take it for granted that its heroes are Asian. Why would Paramount and Shyamalan go out of their way to offend these fans? There are many young Asian actors capable of playing the parts."

And ‘Doctor Strange’ was supposed to have another prominent Asian character.

‘The Ancient One’ was instead played by Tilda Swinton. Sigh.

‘Star Trek’ is a multicultural universe.

And yet, the character ‘Khan’ (who is supposed to be of Indian descent) was played by English actor Benedict Cumberbatch in Star Trek Into Darkness.

Ed Skrein turned down a ‘Hellboy’ role amid controversy:

Good on him, though!

Recently, there have been a few positive signs.

Kevin Kwan, author of Crazy Rich Asians, sold the film rights to the book for only $1. Why? He wasn’t interested in selling to the highest bidder; rather, he wanted to make sure that whoever made the movie kept the principle cast Asian, as they were meant to be.

And we all died at the cuteness of ‘To All the Boys I’ve Loved Before.’

The author of the book, Jenny Han, was also adamant that her main character (Lara Jean Song Covey) remain an Asian-American girl in the movie adaptation.

So, we may still live in a society where some don’t understand the importance of representation, and the wrongness in impersonating other races. But if we curb that ignorance when we find it, one day, we won’t have to. Share this story with your friends!