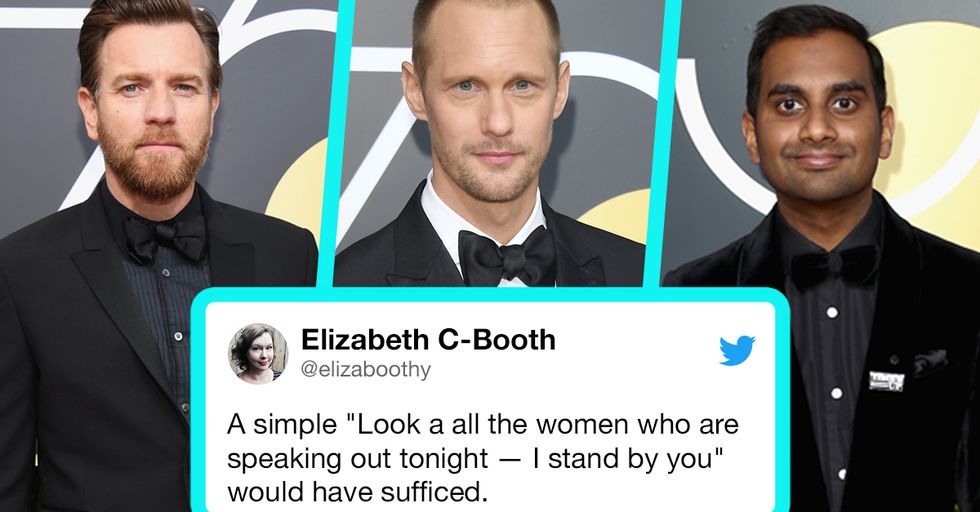 Imagine, if you will, a very typical Hollywood scene:

The male actor du jour  – let's say an Armie Hammer or an Ansel Elgort ('cause they're everywhere these days) – sits in his publicist's office, going over the Do's and Do Not's of the upcoming Golden Globes.

"These Golden Globes will be fraught with peril," the publicist cautions, blowing a plume of smoke from her electric cigarette. "All the women have their panties in a bunch about the whole Times Up and #MeToo movements. This is not the time to make a mistake."

"What do I do?" asks the hapless actor, all doe-eyed innocence.

The publicist thinks about it for a second. Finally, she leans forward, and looks into his eyes. "Don't speak," she advises. "Don't. Speak."

While the afore-described scene is, of course, an imagined encounter rather than a factual one, it's easy to see how it could have indeed been fact.
Sunday's Golden Globes were a glittering anomaly in the world of award shows. For one, everyone on the red carpet wore black except for a few notable holdouts that apparently did not get the memo.

The reason they wore black, however, was the most important award show deviation of all. Celebrities of all stripes were protesting the ingrained misogyny in Hollywood, which had resulted in a spate of sexual harassment and assault scandals starting with producer Harvey Weinstein.
You remember him. The man that singlehandedly made bathrobes shorthand for sexual assault because he was so fond of wearing them as he leered at helpless young actresses and destroyed their careers for not acquiescing to his sexual demands.

Weinstein was such a prolific sexual assaulter, he had harassed, intimidated, violated and raped over 80 women spanning the course of three decades before any of his wrongdoings hit the public eye. The reason for this, of course, was silence.
It was silence on the part of his victims, who he terrorized by destroying their careers through whisper campaigns labeling them "crazy" or "difficult" and through outright intimidation via lawyers and spy agencies – yes, actual spy agencies using actual ex-Israeli spies.

It was also silence on the part of the assistants and subordinates who signed nondisclosure agreements, or the men he worked with like Quentin Tarantino and Ben Affleck and the like, who turned blind eyes to his depredations even though they knew or suspected what was happening.
And that silence was in full display again at the Golden Globes Sunday. On the red carpet, woman after woman spoke out about #MeToo and Times Up. Debra Messing even called out E! about their unequal pay... on E! On Sunday, woman after woman displayed bravery, speaking truth to power, but as for men... that bravery was not as evident.

To be fair, host Seth Meyers did set the tone of the night, making pointed joke after joke about Hollywood and sexual assault. Heck, he even subtly called out Donald Trump. Seth Meyers literally did not hold back.
Neither did a few other men, like Handmaid's Tale executive producer Warren Littlefield, who, as he was accepting the award for best drama series, said, "We have a responsibility to live up to Margaret Atwood’s vision and to be part of the resistance. Today we join the resistance for Time’s Up. That feels for all of us a really important and good place to be."

Lady Bird producer Eli Bush was another notable male ally. When the film won best motion picture musical or comedy, he quickly gave the mic to writer and director Greta Gerwig, who is largely considered the powering force behind the movie. Other men at the Golden Globes were not so brave - namely, actors.
Angus Johnston, a historian and advocate of American student activism and CUNY professor, as per his Twitter, noticed something startling during the show.

People were quick to rebut this claim by pointing the male holdouts mentioned before, however, none of them were actors. Yes, all the male actors had dutifully worn black and sported Times Up pins, but those actions were literally the base minimum they could do. After all, when was the last time you saw a male actor wearing a tux in any other color than black on the red carpet?
People speculated many reasons for this:

I'm seeing shade being thrown at the fact that no man said anything about #MeToo at #GoldenGlobes tonight.

Here's the thing: we've also seen that when men do weigh in, they're told this is not the time for them to speak, it's time for them to shut up and let women speak — Bitter Script Reader (@BittrScrptReadr) January 8, 2018

I think a lot of men did not speak towards #MeToo is because if they did they’d have a target on their back and they know people would deep tissue search their backgrounds and make a headline out of any contradictions. cowardly, but I think that’s what happened.

Also, I bet you could count on one hand how many times the men were asked about #MeToo, either on the red carpet or in interviews backstage. https://t.co/ph0V3oUcEt

While these are all excellent reasons, here's another way of looking at it. Cowardice – pure and simple.
The fact of the matter is, women, by mere virtue of their gender, have to straddle a delicate balance at all times. When #MeToo came out, the focus was on women to speak out, even though by and large, they were not the perpetrators of the vast majority of the scandals. When they did speak out, they were scrutinized as to why they waited so long to speak out, and whether the tone with which they did so was palatable. Just look at the way venerable actress Meryl Streep was treated.

This is so important because it illustrates the emotional load that women carry when trying to succeed. Women spen… https://t.co/ZR4lt1OTb5
— Jaime Santos (@Jaime Santos)1515385944.0

Women are at all times scrutinized and forced to bear the burden of issues they aren't even responsible for. When they speak out, they're slapped down time and again, and when they don't speak, they're punished for their silence.
The one time Hollywood men found themselves in the same position, they fumbled. To be more accurate, they rested on their laurels, confident that, by mere virtue of doing the very least required of them, they would be applauded for being allies. But that is no longer the case.

While everyone is weary of #MeToo and Times Up, the fact remains that sexual harassment and assault are ongoing problems deeply entrenched in America's psyche. And the work of un-entrenching them requires men.

For the past few months, Hollywood women have done the heavy lifting. It's time for men to do the same. Instead of just wearing black and being silent, here's a suggestion – speak up, speak out. Aid the women beside you even if it is uncomfortable or hard.
Yes, Hollywood men face a catch 22, but so do Hollywood women, and they've been dealing with it their entire professional lives, all the while having to sidestep the added minefields of sexual harassment and assault. It's not too big an ask to expect Hollywood men to bear the discomfort and for once, do what is right and speak up.

Being an activist, being a member of society, being alive demands that we risk screwing up and saying or doing the wrong thing.