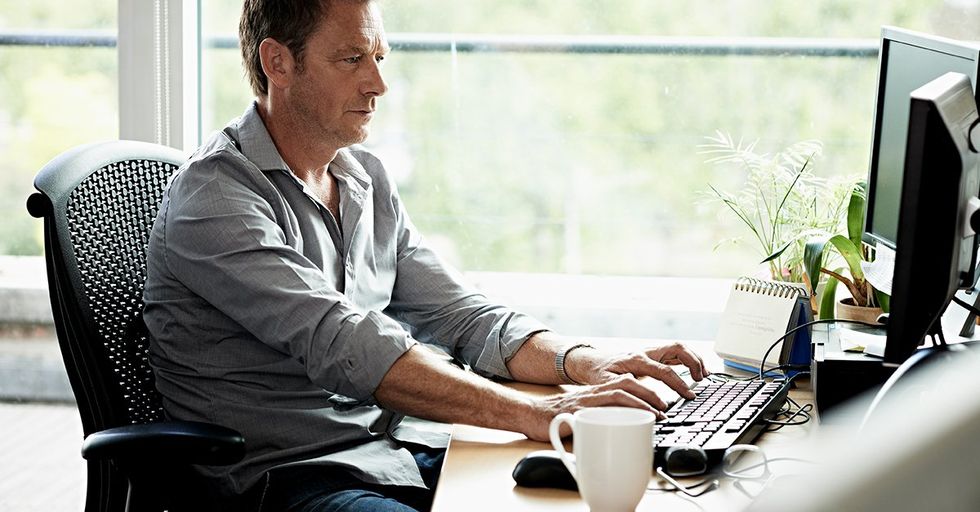 Writing is harder than most people think. Many individuals assume that they could write the next Great American Novel if given enough free time, but in reality, actually putting pen to paper (or, in most cases, finger to keyboard) requires a lot of commitment, talent, and time. And once you're done writing, you have to undergo the slog of editing. In most cases, the majority of what you write in a first draft probably won't even make it to the final product.

One of the hardest parts of writing is crafting believable characters. This especially evident in the way that some male writers write about female characters. For whatever reason, many male writers tend to write primarily about the physical aspects of their female characters and honestly? It's pretty weird and disturbing. Obviously, there are plenty of writers (of all sexes) who really nail it when it comes to writing about women. But we're not talking about those today. We're talking about the ones who do a really, really bad job. Ones who can't seem to not mention boobs in the weirdest contexts. I'll show you what I mean.

Take this writer, who assumed women look forward to their period:

If you have a period, you know that there is literally nothing to look forward to about it. Except maybe eating chocolate to cope.

This whole discussion about criminal shows is giving me life:

I think I can count on one hand the number of times I have personally worn a matching set of bra and underwear. Honestly, I could probably count them on one finger.

"Her hat size was infant."

Yes, this is a bit of an exaggeration. But not much of one.

I'm sure that to some people, having their body compared to a war plane's fuselage is the highest compliment. But probably not most people. Just saying.

I should have way more children...

I cannot even begin to understand where this guy got this idea about a labyrinthine pee channel in the female body. It wasn't from a female anatomy textbook, though.

Talking about "the number."

Let me just save you some trouble, dude. Everything you have written here is incorrect.

Hey! This is gross and weird!

No 18-year-old woman wants to be sexually harassed by a man in his 50's, and it is honestly kind of insane that I even have to write that sentence.

Chuck Palahniuk has written some pretty good stuff. This ain't it.

Yes, this is exactly how I think about my female coworkers.

Just kidding. It is not. Not even a little bit.

Sorry, is that a good thing? Pillows of dough? I don't think that's what breasts are supposed to be like.

I've just asked my breasts what they think about this particular excerpt. They said they were very disappointed.

I'm pretty sure "joggled" isn't a word. I do like it, though. I'm going to start using it.

This is just impossible.

No one — and I mean literally no one — would ever choose to wear leather pants without underwear. Why would anyone do that? They wouldn't.

If anyone exists who is 5'11" and weighs 115 pounds, I can assure you that they are severely unhealthy. Or possibly dead.

My own breasts cowered in disgust at this line.

Tell me more about her big breasts.

Did you know that breasts can go from saggy to firm at the drop of a hat? They cannot. But this guy thinks they can.

"Yeah, she's mourning her deceased sister, but I want to communicate that she is still totally bangable even in the height of her grief, ya know? It's really important that the reader knows that." –The guy who wrote this, probably.

I dare you to compare your girlfriend's butt to the rump of a mountain sheep. Seriously. I dare you.

"It can make her unbalanced."

Are we sure that Haruki Murakami has ever met a living human woman? Are we absolutely positive? I'm starting to have my doubts.

Well, folks, we did it. We found the two worst words to use in conjunction when describing breasts. Congratulations.

Say again about the nostrils?

I like that this one isn't sexual in the slightest. It's just 100 percent mind-boggling. Translucent?!

I can't even remember the last time I wore a pair of pants with front pockets. And I certainly didn't put an envelope into said pocket.

My favorite detail is the implication that in most cases, the legs shrink after one reaches middle age.

I was ready for this to be a line that was disturbing but still understandable. It was not.

None of these bodies follow the laws of physics.

"Everything she has two of"

Uh, ma'am? May I just say — your eyeballs and lungs are looking especially womanly today.

What was around his neck?

OK, so this one is probably a typo and was supposed to read "hands." Still, it's kind of fun to imagine the flexibility in this situation.

You heard it here first: Women do not walk.

If you ever see a woman walking, you should immediately report her to the authorities. Such a thing is actually impossible. Share this with someone who loves rolling their eyes at dumb guys!