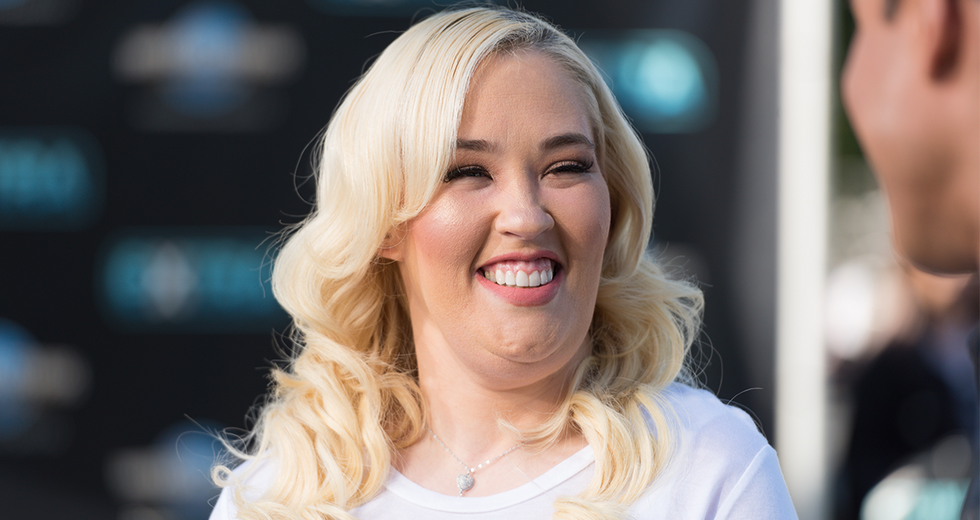 I'm sure you've heard by now that Mama June – of the hit TLC show, Here Comes Honey Boo Boo – was arrested last Wednesday on for possession of crack cocaine and drug paraphernalia. The reality star was taken into custody after police found a pipe with crack cocaine in her car at an Alabama gas station.

June's boyfriend Geno Doak was also arrested, and charged with third-degree domestic violence, possession of a controlled substance and possession of drug paraphernalia.

Now, Mama June is no stranger to the so-called "spotlight." She rose to fame after the success of her daughter Alana's pageant career and her appearance on yet another hit TLC show, Toddlers & Tiaras. Since then, the Shannon family has had two spin-off shows and a growing presence on social media. Like I said... she's no stranger to the spotlight.

Even if that spotlight is a dim LED light in the Macon County jail.

If you thought June's arrest was shocking, just wait until you see her mugshot.

Because it totally doesn't look like a mugshot of someone who's been arrested for possession of drugs...

I'll let the viewers at home decided on this one since I'm having a hard time telling if that's a snarled lip or a stank face. Or maybe both?

And let's just say that it's a bit less...glamorous. Geno is giving me more of a "Dazed and confused" vibe.

And while Mama June is no stranger to funny faces, we think her mugshot takes the cake.

But don't get us wrong, she's not the only one who has been caught making a less-than-glamorous face in their county jail portrait.

From crazy hairstyles to strange animal companions, or even an unusually gorgeous photo, there are plenty more fascinating mugshots to share.

Because this one probably beats it.

If that style didn’t win all the crazy awards, this will.

Someone give this man proper braiding lessons.

What about this oddly gorgeous shot of #PrisonBae?

Arkansas resident Sarah Seawright became internet famous after her flawless mugshot caught the attention of social media users! You can find her under the hashtag ‘Prison Bae.’

Pretty normal-looking mugshot, right? That’s until you find out that this guy’s legal name is…well, either impossible to remember or impossible to forget: Beezow Doo-Doo Zopittybop-Bop-Bop.

This man reportedly answers to the name “Halfy."

This Miami man, Carlos Rodriguez, is famous for missing half of his head. He was arrested (and had this mugshot taken) on arson charges. Next up, one man's mugshot turned out to be life-changing...in the best way!

Miami apparently has a Joker-lookalike of its own; appropriately, this man’s affidavit lists him as a ‘tattoo model.’

Or, alternatively, “The Blue-Eyed Bandit." It’s not so much the mugshot that is crazy, but rather what became of it. After his striking mugshot went viral in 2014, Jeremy Meeks signed a modeling contract and has since made it big as an international model!

Santa Claus was on his own naughty list last year.

Fidel Gonzalez Gutierrez was arrested for selling cocaine in 2017—and this Santa look-a-like was even wearing a red shirt in his mugshot!

This guy doesn’t kiss and tell.

18-year-old Micah Musser was arrested for trespassing, and his mugshot shows that he got quite a few hickeys before the arrest! You might say the whole thing was…a real pain in the neck.

What’s with the macaw?

We’re not sure why this bird (named ‘Bird’ by its owner) needed to be in the mugshot, but there you have it!

This man’s haircut might need a few finishing touches!

Again, normal mugshot—but notice that this guy’s shirt features a print from his last mugshot! It also says ‘Family Reunion.’ There’s probably an interesting story behind that fashion choice.

This model has the ‘World’s Hottest Mugshot.’

Mekhi Alante Lucky’s mugshot went viral, his handsome features and eye-catching heterochromia getting him signed with the St. Claire’s Modeling agency! On the next page, an eye-opening mugshot of bovine proportions...

Why did the woman in a cow costume cross the road?

This memorable mugshot was taken of a woman who was arrested for blocking traffic, chasing kids (in a cow costume) and threatening a police officer.

This mugshot came out of the blue.

In a way, she kind of looks like the Harley Quinn to our earlier Joker.

Don’t go too hard on the Fourth of July!

Unlike this guy, who was arrested for selling narcotics at a popular hotel club in Miami.

Heisenberg has nothing on this kingpin.

Sarah Furay was arrested in 2015 for drug trafficking—including cocaine, meth, ecstasy, and LSD. She’s also the daughter of a DEA agent, believe it or not! This earned her the moniker of the ‘adorable drug kingpin.’

Not your average black eyes!

While there are plenty of weird headshots, Morgan Joyce Varn’s is definitely out there. Note the totally blackened eyes! Next, the most unorthodox wedding photo you've ever seen!

This definitely wasn’t the best honeymoon.

Tammy Lee Hinton was arrested at her own wedding, just a little while after she said ‘I do!’ She even opted not to change out of her wedding clothes, hence the impromptu bridal photoshoot courtesy of the Jackson County Police.

via: The Smoking Gun

Patrick Tribett was arrested in West Virginia for huffing paint—and the paint didn’t come off for the mugshot!

There’s no wrong time to snack.

As the story behind this mugshot goes, this North Carolina man told police officers he was hungry after his arrest. So, naturally, they gave him a sandwich.

One Mohawk to rule them all.

This woman, “Mohawk Girl," was arrested for a DUI. In a happier turn of events, she later gave an interview about it as a student studying Law Enforcement!

When the weather outside is frightful…

Wrap yourself in toilet paper? That’s what this woman did when she said that her New Hampshire prison cell was too cold. The more hardcore mugshot you'll ever see is up next...and it definitely isn't what you'd expect!

This is the stuff of nightmares.

This teen was arrested for stabbing a woman…while telling her that he needed to “sacrifice" someone. After his arrest, this creepy mugshot was taken.

Angela Green’s mugshot went viral on the internet after she posed with her best ‘duck lips’ for the camera!

Now that’s how you work for the camera.

Noel E. Dawson Jr. was arrested after he chased a family member with a hatchet! Thankfully, the only thing he hit was his own truck.

Pretty sure this is how a bunch of horror movies begin…

This man was found, dressed up on Halloween, intoxicated and sleeping in the upstairs bedroom of a stranger’s house. That’s more ‘trick’ than most people need in their lives!

This is the most metal old lady you’ll ever see.

Hell hath no fury like Helen Staudinger, a 92-year old Floridian woman. After her 53-year-old neighbor refused to give her a kiss, she shot up his house (he’s fine, don’t worry) with her semi-automatic pistol! Share this story with other people who would find this info fascinating!