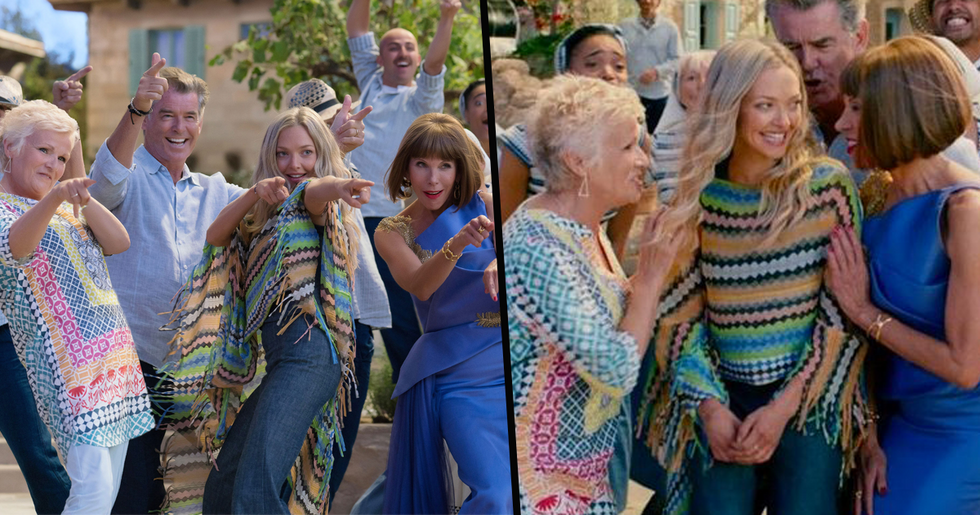 'Mama Mia 2' Is Officially Landing on Netflix Next Month

Given all the extra time we have on our hands, a lot of us have been spending it watching movies.

If you're one of those people then you'll be happy to know, there's another movie coming to Netflix, and it's a classic.

Keep scrolling to find out when it'll be available...

We've all been making our way through everything that Netflix has to offer.

So it's a good job that they keep adding more.

Because what would we do without it.

Throughout May, you'll have seen the addition of:

All Day And A Night

"A young man embarks on a journey of self-discovery after landing in the same prison as his father."

"An Arctic fox works in the mailroom of a package delivery service, but wants to be doing the deliveries."

"Marty McFly, a 17-year-old high school student, is accidentally sent thirty years into the past in a time-traveling DeLorean invented by his close friend, the eccentric scientist Doc Brown."

Back to the Future Part II

"After visiting 2015, Marty McFly must repeat his visit to 1955 to prevent disastrous changes to 1985...without interfering with his first trip."

Charlie and the Chocolate Factory

"A young boy wins a tour through the most magnificent chocolate factory in the world, led by the world's most unusual candy maker."

"In Cracked Up we witness the effects adverse childhood experiences can have across a lifetime through the incredible story of actor, comedian, master impressionist and Saturday Night Live veteran, Darrell Hammond."

"An elite unit of the LA County Sheriff's Dept. and the state's most successful bank robbery crew clash as the outlaws plan a seemingly impossible heist on the Federal Reserve Bank."

"Violence ensues after an extraterrestrial race forced to live in slum-like conditions on Earth finds a kindred spirit in a government agent exposed to their biotechnology."

"Each of the women portray one of the characters represented in the collection of twenty poems, revealing different issues that impact women in general and women of color in particular."

Fun with Dick and Jane

"When an affluent couple lose all their money following a series of blunders, they turn to a life of crime to make ends meet."

"A teenage immigrant struggles with the death of his brother and feelings of isolation and loneliness in his new surroundings."

"A psychological study of operations desert shield and desert storm during the gulf war; through the eyes of a U.S marine sniper who struggles to cope with the possibility his girlfriend may be cheating on him back home."

"Without tanks or air support, a corporal and his team must muster all the courage and firepower they can to fight their way across war-torn Afghanistan and shepherd an important anti-Taliban woman to safety."

"A group of Marines must protect a US Embassy in the Middle East when it suddenly comes under attack from enemy forces."

"The Madagascar animals fly back to New York City, but crash-land on an African nature reserve, where they meet others of their own kind, and Alex especially discovers his royal heritage as prince of a lion pride."

"It follows a doting wife, who must find a way to absolve her husband of serial murder charges."

"Born with unique powers, a boy is recruited to fight demons and save the community that fears him."

Norm of the North: Family Vacation

"Overwhelmed with his Kingly duties, Norm's crown is stolen and he embarks on a journey to find it in conjunction with repairing his family's relationship."

"The Feds try to take down notorious American gangsters John Dillinger, Baby Face Nelson and Pretty Boy Floyd during a booming crime wave in the 1930s."

"Washed-up true-crime writer Ellison Oswalt finds a box of super 8 home movies which suggest the murder he's currently researching is the work of a serial killer whose work dates back to the 1960s."

Song of the Sea

"Ben, a young Irish boy, and his little sister Saoirse, a girl who can turn into a seal, go on an adventure to free the fairies and save the spirit world."

"Teenage surfer Bethany Hamilton overcomes the odds and her own fears of returning to the water after losing her left arm in a shark attack."

The Curious Case of Benjamin Button

"Tells the story of Benjamin Button, a man who starts aging backwards with consequences."

The Half of It

"When smart but cash-strapped teen Ellie Chu agrees to write a love letter for a jock, she doesn't expect to become his friend - or fall for his crush."

"A newly wed man who believes he's just gotten hitched to the perfect woman encounters another lady on his honeymoon."

"A lawyer defending a wealthy man begins to believe his client is guilty of more than just one crime."

"Picking up directly from the previous movie, vampire warrior Selene and the half werewolf Michael hunt for clues to reveal the history of their races and the war between them."

Underworld: Rise of the Lycans

"An origins story centered on the centuries-old feud between the race of aristocratic vampires and their onetime slaves, the Lycans."

"A real-time account of the events on United Flight 93, one of the planes hijacked on September 11th, 2001 that crashed near Shanksville, Pennsylvania when passengers foiled the terrorist plot."

"Bud is a young man from the country who learns about life and love in a Houston bar."

What a Girl Wants

"An American teenager learns that her father is a wealthy British politician running for office. Although she is eager to find him, she realizes it could cause a scandal and cost him the election."

That's just to name a few!

If you do, then we bet that you'll love this as well.

Mama Mia 2 will be streaming on Netflix from next month.

Netflix announced the news on Twitter and fans can't wait.

They even added a little pun, writing "We have some news to cher with you: Mamma Mia"

The movie was a huge hit when it was released back in 2018.

As it picked up five years on from the first film which was released in 2008. Can you believe it!

Now if you somehow never watched it, we won't say anymore and spoil it for you.

But you need to watch when it lands on Netflix on June 26th!