'Mama's Boys' Are Happier and More Successful, According to Experts | 22 Words 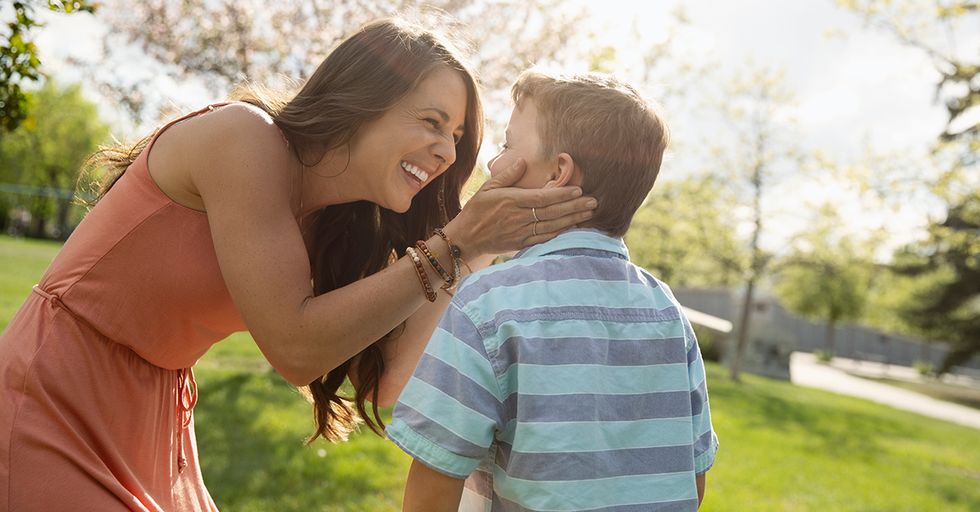 'Mama's Boys' Are Happier and More Successful, According to Experts

Being a parent is one of the hardest, most rewarding jobs there is in the world. They say there's nothing like the love that a parent has for their child - and many people would agree with that statement.

But there's no getting around it - being a parent is hard.

There's the constant worry and anxiety about your child, and not to mention the sheer exhaustion. Raising a human being is a huge deal, and to all parents - I salute you.

Another challenge that comes with parenting is all of the opinions. Everyone has their own style of parenting, but some people think their way is best. Unfortunately, there's a lot of "parent judging" others for how they raise their child.

If you have a son and someone's mentioned off-handedly that they are a "mama's boy" and it's upset you, don't fret! Because experts are actually saying that "mama's boys" are happier and more successful. Keep reading to find out why!

Being a parent is hard.

You want your children to grow into independent, upstanding members of society... But you also want them to always stay your baby!

Everyone has different ways of parenting. No one way is the "right" way. That's the beauty of being a parent - it looks different for everyone.

Sometimes I purposely put the remote up high so Makenna can’t reach it and mess with the tv.. jokes on me because I… https://t.co/N4XJMHqLDu
— Dezaree Lawless (@Dezaree Lawless)1542810602.0

Sometimes people judge others for how they parent their children. It can become quite toxic...

Especially in the age of the internet. There are so many trolls on Instagram and Twitter, leaving nasty comments about the ways people parent their children.

Mind your own business

Sure, iPads have made long road trips easier for parents and their antsy children, but raising kids in the digital age where everything is just a click away presents its own problems.

I’m going to a party and didn’t pump before leaving, so now my left boob is double the size of my left. How’s your night going? #momstruggle
— crunchwrap supreme (@crunchwrap supreme)1536975655.0

At the end of the day, parenting is always hard. Especially when others label you and your child as a certain "type" of parent or kid.

What exactly is a "mama's boy" by society's standards?

Well, people have a lot to say about what constitutes a "mama's boy."

In 2017, Cosmopolitan put out an article entitled "10 Signs He's a Mama's Boy." They claimed that if he can't survive out in the wild, he might be a mama's boy.

The article also said that if he and his mom Snapchat one another, his mom can "never do anything wrong," he's at his parent's house all the time, he's spoiled, and she shows up unannounced, he's a mama's boy.

They also pointed out that if he thinks his mother can do no wrong, he's a mama's boy.

Of course, it's important to take an article like this with a grain of salt. It's an opinion. A guy who has a great relationship with his mother is a wonderful, amazing thing!

But it's all about balance and healthy boundaries. Like, okay, if he can't do his own laundry and his mom does it for him - one word: no. But that goes for anyone!

Generally, when someone is referred to as a "mama's boy," it's with a negative connotation.

When someone is called a "mama's boy," there's the implication that a man has severe attachment issues with his mother.

In some cases, "mama's boys" can be seen as "weak." But that feeds into the idea that men should never show any signs of weakness and plays into gender stereotypes and toxic masculinity.

So is being a "mama's boy" a good thing or a bad thing? Well, some experts say that it's a very good thing!

Set up for success

A 2012 study by Harvard University called "The Grant Study," found that men who had close relationships with their moms performed better at work and in school. They also earned more money.

The study also found that these men were able to keep Alzheimer's and dementia under control as they grew older.

Another study that was published in Child Development found that baby boys who did not have a strong, formed relationship with their mother grew up to be more aggressive and destructive.

Sociologist Dr. Michael Kimmel has written a lot about masculinity. He explains that these boys also grew up to have anxiety and a fear of intimacy in their adult lives.

At the annual meeting of the American Psychological Association, another study was presented that centered on 426 middle school boys in New York City public schools.

Their research found that boys who were close to their moms were less likely to find that masculinity meant they had to be "tough, stoic, and self-reliant."

They also had better grades and had less depression and anxiety.

Not the same with fathers

The research found in this particular study concluded that closeness with their fathers did not have the same effect on the boys.

Carlos Santos, a professor at Arizona State University's School of Social and Family Dynamics, presented the study. Santos found that boys who didn't adhere to masculine stereotypes and who were open emotionally had better rates of mental health during their time in middle school.

"If you look at the effect size of my findings, mother support, and closeness was the most predictive of boys' ability to resist [hypermasculine] stereotypes and therefore predictive of better mental health," Santos explained.

Typically, being a "mama's boy" can be seen as a very negative thing. It's often used as an insult rather than any sort of praise.

The good in it

But, like everything else in the world, it's more layered than that. A boy who has a good, healthy, and strong relationship with his mother is a very positive thing.

The issue with the term

But there's so much hate around the idea of a "mama's boy." Sure, there's the extreme side of it... Unhealthy attachment to anybody isn't good.

And everyone should learn how to be independent! But at the end of the day, there's nothing wrong with having a good relationship with your mom. In fact, it's a great thing! Just...know how to do your own laundry.