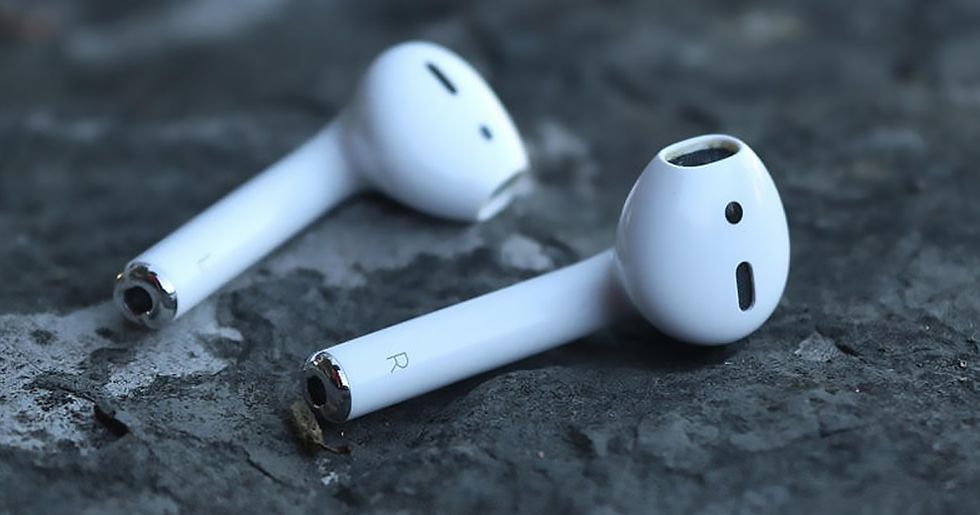 Lord help us. It's 2019, and for whatever reason, this headline isn't surprising at all. We've heard stories of kids getting sent to hospitals for swallowing legos, or pennies, or My Little Ponies, but this story isn't about a kid, and it's not about something that costs $10, max.

I'm not sure about you, but I'm pretty sure the most expensive thing I've ever swallowed was like a $60 steak, and even then I had to use a gift card. And it was actually food! Shoutout to Ruth's Chris for providing my old work with a few extra gift cards. (This article is not sponsored by Ruth's Chris. But if anyone's listening, I'd be a great spokesperson.)

I've also swallowed my own pride, but that's basically worthless at this point. At least I didn't swallow something that cost like $200! The weirdest part of this whole story? Swallowing AirPods is becoming a trend. I'll explain.

Let me take you on a journey to Taiwan.

I know you've been wanting to go on vacation, but you're out of PTO and it's too expensive to fly, so here's your chance.

Okay, so now that you've got the location, let's figure out the "how."

Because no one just swallows an AirPod because they think it's gonna taste good (more on this later).

So it had to be an accident.

Maybe he mistook it for an abnormally large tic-tac. Maybe he thought it was a tasty piece of hard candy? No!

Ben Hsu was doing something a lot of people do.

He was listening to music while going to bed. Or maybe a podcast. Maybe some YouTube videos! Either way, they were in the ears as he fell asleep.

But he woke up to one missing.

Which I imagine is a pretty common occurrence if you fall asleep with them in. Especially because I imagine you could lose one of those things while looking right at them.

This is where the story usually ends.

With a bit of heartbreak, down $150, and only one AirPod to make you look like some douchebag from 2008. But not this time!

Ben Hsu, being smarter than anyone else that owns AirPods (just barely), remembers that Apple has a "Find My AirPod" feature.

Because of course they do. If they didn't, AirPods would disappear more frequently than socks in the laundry.

So he dove into the app, which is intended to play a loud sound from whichever AirPod you select.

I would like to choose "My Coworker's AirPod That I Will Use As a Replacement" for 500 please, Alex.

At first, he hears nothing.

Well, that's it. AirPod lost. I'm to call the ghost of Steve Jobs and ask for forgiveness.

But then, the faintest of beeps.

He thinks, it's gotta be wrapped up in a blanket, or under the mattress somehow, or something.

"I checked under my blanket and looked around but couldn't find it — then I realized the sound was coming from my stomach."

NOPE. This is like some Alien shit right here. I don't want anything in my stomach that doesn't belong.

There was beeping coming from inside of him.

I am constantly reminded of that Rugrats episode where Chuckie thinks eating a watermelon seed is going to kill him.

So he did what anyone would do.

He went and got an x-ray. And sure enough!

Look at that lil thing.

Man accidentally swallows an Apple AirPod… and it STILL WORKS after it passes through his system https://t.co/nxioruNpMi
— Daily Mail Online (@Daily Mail Online)1556742664.0

It's really hard to see, but it's there! (Please no "that's what he said"s in the comments.)

According to the Daily Mail, Hsu received some "help" from the doctors.

No, not like that. They gave him a laxative and sent him on his way. You know so that hopefully it doesn't just fully dissolve.

After a... dirty search, Hsu eventually found the Pod he was looking for.

This leads me to the question: do you use a regular toilet and run the risk of it getting water damage, or do you do the ol' doggie method?

Regardless, after a quick clean and a hearty bowl of rice (for the AirPod), things seemed to be back to normal.

To anyone thinking about, like, eating their iPhone to see if this works, please just send me a video so we can write a story about it.

"The battery was still at 41%. It was incredible."

Yeah! That thing should have been inside of you forever! Crank it up, take it to the beach, and become the Human Boombox you were always meant to be.

Also, why is this guy not dead?

Well, according to Business Insider (and like, a doctor they talked to), he wasn't harmed because the battery was never exposed to his stomach.

Otherwise, it would have been game over.

But here's the thing, Hsu isn't the first person to even do this. And he probably won't be the last.

Check out these two idiots doing it on purpose.

*Screams in British accent* Why? Why bruv? Why would you do that, bruv?

They tweeted about it. And it's gross.

I hate these people. Why are they more famous than me?

Give me another terrible tweet. This one is worse. No photos though, thank God!

Stop. Swallowing. AirPods. Please for the love of God no one do this.

And of course, the internet has their opinion.

He does seem very proud. I would be too!

And it still works!

Honestly, I would have put it working again at like 41%.

This is the real question.

I definitely couldn't look at my AirPods the same way ever again.

Please, please, I'm begging you, don't do this ever.

We don't need more of this stuff! It hurts my body and it hurts my soul.

What would you do?

Would you clean off the AirPod and put it back in your ear? Or is it a major NOPE for you and time to go back to the wired buds? Let us know in the comments!