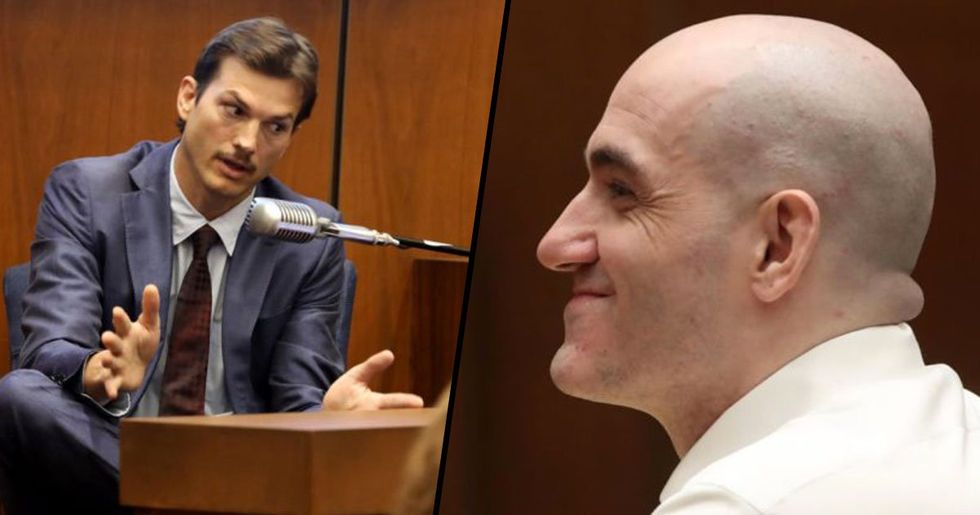 Earlier this year, we watched on as Ashton Kutcher stood up in court and testified in the case of the 2001 murder of his ex-girlfriend, Ashley Ellerin.

Now, this was a somewhat bizarre sight for most of us, as Kutcher is more commonly seen on our TV screens, not in our courtrooms.

But the case in question was a big one and saw the notorious "Hollywood Ripper" be finally held accountable for the brutal murders of 3 innocent women. And now, justice has finally been served.

Michael Gargiulo has been found guilty of murder, and even faces the possibility of the death penalty. Keep reading to see what prosecutors had to say about the killer, and how Kutcher's testimony helped to convict one of the most dangerous serial killers of our time.

When you think about Ashton Kutcher, you probably think about the silly guy from That '70s Show.

In Michael Kelso, Ashton played a complete and total moron, and in doing so, he created one of the most endearing characters in an already very endearing show.

Or maybe you remember him best for his role in Dude Where's My Car?.

Here he is again, creating an endearing character just by being a complete lunkhead. Turns out, America will always love a dumb guy. (Just look at who we put in the White House, am I right?)

Or maybe The Ranch is your preferred Kutcher movie.

While I myself haven't watched The Ranch, seeing Ashton lick a bottle of beer up and down before he hands it over doesn't necessarily suggest that he's playing a Harvard professor.

Those are all fun, silly movies.

Is it possible that Ashton Kutcher isn't even an actor at all? I mean, I don't want to call him an idiot, but could it be that he's just a big lovable labrador retriever of a man and is just up there on the screen being himself?

Most actors who make the jump from sitcoms to movies try to establish their capital-T talent by doing one of those Shakespeare-but-modern-day things that the Joss Wedon-types are always cranking out.

Maybe that's why it's so shocking to hear that he's involved in a murder case.

Ashton Kutcher is supposed to be a goofball, and the only goofball I want to be involved in a murder case is Detective Pikachu. (He made more wisecracks than you'd expect out of a detective or a Pikachu.)

The trial of the alleged serial killer, Michael Gargiulo, is currently going on.

Accused of murdering three different women between 1993 and 2001, Michael Gargiulo has been dubbed the "Hollywood Ripper," which is about as scary a nickname as you can get.

Over one hundred witnesses have been called to testify.

The Los Angeles prosecutors are casting a wide net. With cases this big and salacious, it's important to get every last bit of information on the record before the court.

And one of those witnesses in this case is Ashton Kutcher.

Through a strange set of circumstances, Ashton Kutcher has found himself wrapped up in this case, and on Wednesday, he testified before the court.

A young woman named Ashley Ellerin was murdered in 2001.

According to People, Ellerin was getting ready to go out when an assailant "snuck into the woman’s Hollywood home and stabbed her forty-seven times."

That same night, she had plans to get drinks with Ashton Kutcher.

In a crazy turn of circumstances, the person that Ellerin was going to meet that night was up-and-coming sitcom actor, Ashton Kutcher. The pair had scheduled their first date.

When Ellerin didn't show up, Ashton thought that he had been stood up.

Which, for a normal guy, you'd have to think would be a logical assumption. But have you seen Ashton Kutcher? I can't imagine he ever gets stood up. I mean, those cheekbones alone...

Kutcher said that he called Ellerin a few times throughout the day, and when she didn't answer, he decided to just pop on over.

And he touched the doorknob.

No, he didn't go there and rub his hand all over the doorknob like a weirdo. But he did knock and, upon noticing that the lights were on, tried the front door only to find that it was locked.

That means that his fingerprints were at the crime scene.

You never want your fingerprints at a crime scene. That's why I wear gloves whenever I go to the bank — just in case someone robs it while I'm there.

And most victims know their murderers...

It's actually incredibly rare to be murdered by a stranger, as it now appears that Ellerin was, with only 9.7 per cent of victims being killed by someone that they'd never met before.

Ashton Kutcher could have been a suspect.

People is reporting that he never actually was a suspect, but that terrifying possibility had to have been in his mind. It doesn't look good when a woman ends up dead after she stands up a man who had, presumably, never been stood up before...

He was there and ready for a date.

And, man, he better have brought flowers. When you're making That '70s Show money, you can for sure afford flowers.

Kutcher decided to peer through the window.

This move is maybe a liiiiiittle weird, but, hey, he didn't know what was going on. And the window was right there...

He saw what he thought were red wine stains.

But, in one of the most horrifying details of the story, the prosecutors assert that what Ashton actually saw was Ellerin's blood.

But Kutcher said that Ellerin had held a house party in the past.

As Kutcher said on the stand, seeing spilled wine "wasn’t alarming because I went to her house party [days before] and it was like a college party. I didn’t think much about it."

When he heard what had happened to Ellerin the next morning, Kutcher said he was "freaking out".

"My fingerprints are on this door and I was freaking out," Kutcher said, according to People.

But he knew what he had to do.

As the facts are being gathered as to what transpired between Ashley Ellerin and whoever killed her that night, Ashton Kutcher's testimony could turn out to be vital.

His testimony was described by prosecutors as a part of establishing the "chronology of [the] case."

The more precisely that a prosecutor can pinpoint when a crime took place, the more likely they are to find the killer. Timelines can discredit or solidify a suspect's alibi.

What makes this story all the more terrifying is how small a window whoever killed Ellerin had to attack her.

And that's where the timeline comes into play in this case — prosecutors say that "there was a narrow, very narrow window of opportunity for someone to get into the house and murder Ashley."

It means that they must have been stalking her.

Chillingly, the prosecutors went on to say, "whoever that person was must have been watching." That means this wasn't a completely random murder — Ashley Ellerin was being stalked before her death.

You can see why Ashton Kutcher would freak out. The idea of being falsely accused of murder is horrible.

Going to prison for a crime that you didn't commit is the stuff that nightmares are made out of, along with showing up to work without pants and having all your teeth fall out while you take a test you that didn't study for...

The main suspect, Michael Gargiulo, entered a plea of "not guilty."

In addition to being accused of killing Ashley Ellerin, Michael Gargiulo, forty-three, stood trial for the death of thirty-two-year-old Maria Bruno, who was stabbed to death in her home in 2008, and the attempted murder of Michelle Murphy.

He has been dubbed the "Hollywood Ripper" for his actions.

Gargiulo worked as an air conditioning repairman and a bouncer at the time of the murders, and the attempted murder, that he was accused of committing.

As prosecutors say that traces of Michael Gargiulo's DNA were left at the crime scene. So if that does turn out to be the case, it sounds like the Gargiulo case is fairly open-and-shut.

And now, we have an answer.

Because Gargiulo has finally been found guilty of his 2 murders and 1 attempted murder.

The jury deliberated for 4 days.

And yesterday morning, the California-based jury officially found Michael Gargiulo guilty of 2 counts of first-degree murder for the 2001 and 2005 killings of two young women, Ashley Ellerin and Maria Bruno.

And these weren't his only convictions.

Gargiulo was also convicted of attempted murder for a 2008 stabbing of Santa Monica woman, Michelle Murphy, who was able to escape and survived.

The jury heard how Gargiulo would stalk his victims.

According to reports by CNN, the Deputy District Attorney, Dan Akemon painted a picture of a vicious killer who charmed his victims as a helpful neighbor and handyman, before obsessively stalking them and finally breaking into their homes and stabbing them to death.

"His hobby was plotting the perfect opportunity to attack women with a knife in and around their homes."

The trial moves into its second phase next week...

And this is when jurors will be asked to determine if Gargiulo was sane at the time of his attacks. If he is found to be insane, it could change his sentence completely.

But he could still be facing the death penalty.

Sentencing will begin once the second phase has concluded.

And only then could the jury could give him the death penalty. If he doesn't receive the death sentence, Gargiulo will face life in prison without parole.

Though it has been decades since the horrific murders of 3 innocent women, it is a relief to see that the Hollywood Ripper has finally been apprehended and put behind bars for good.