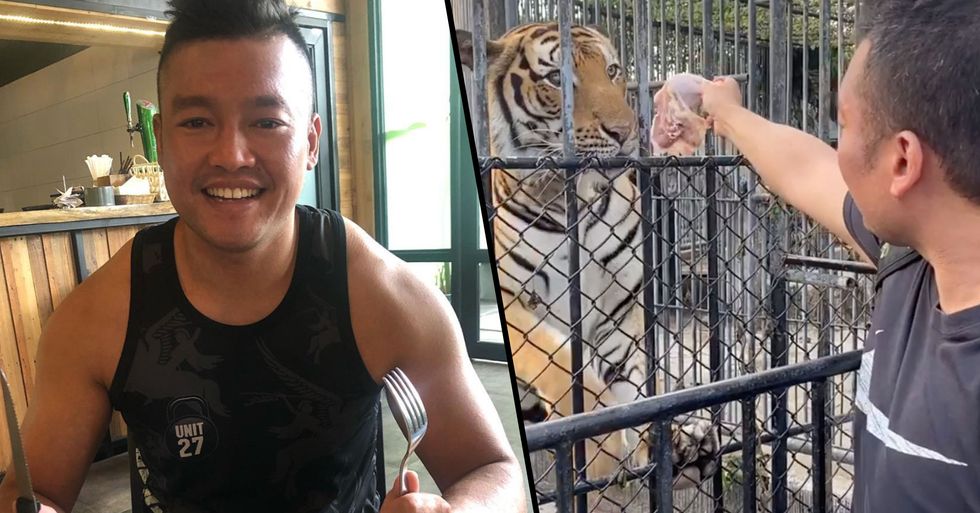 Man Arrested After Breaking Into Zoo to Feed 'Abandoned' Animals

A man has been arrested after breaking into a zoo to feed its abandoned animals, but the reasoning behind his move is harrowing.

And several individuals have begun making moves to help the animals themselves.

But one man in Thailand recently dealt with the force of the law after desperately trying to help animals in a local zoo.

Minh Nguyen, who is from Australia, has been traveling around Thailand with 3 friends recently.

He is a very experienced traveler...

But when Minh was in Phuket, he stumbled across an abandoned zoo.

He discussed the harrowing reality of the abandoned zoo, speaking about how all the animals, including crocodiles, tigers, bears, and monkeys, seemed to have been left for dead without any food.

It is heartbreaking to witness...

And when Minh and his friends came across a couple of zoo workers, they seemed reluctant to feed the animals (who were all showing signs of distress) and even though the young man had meat with him, he wasn't "allowed" to feed the animals and instead, the workers wanted him to give them money.

The owner of the zoo came out and claimed that they couldn't afford to feed the animals.

Minh was devastated by the conditions that these poor animals were abandoned in, so he decided to set up a GoFundMe page in an attempt to have these animals reduced and rehabilitated.

He and his 3 friends were recently arrested by Phuket police for "trespassing" on the zoo's grounds.

The group were charged with trespassing on private property and breaching Thailand's Computer Crimes Act.

However, Minh's lawyer has claimed that the incident was a "misunderstanding" because the group was told by the zoo owner's mother that they were allowed to enter the premises to feed the animals. Minh said, "When we did get charged and arrested, the older brother and mother (of the owner) came down to be witnesses for us."

"There is a bit of a divide among the shareholders as to how the zoo should run. When I go to court, that's when I will know if they want to make a case or not, but I doubt they will... I just want to help the animals," he said.

Phuket Wildlife Authorities have since conducted an inspection of the zoo...

And unbelievably, they found "the zoo has enough food to feed the animals", adding that the animals were in "perfect condition."

We sincerely hope from the bottom of our hearts that these animals are rescued soon...

And we hope that Minh will be able to walk away from the charges and continue his hard work towards saving these beautiful creatures. Make sure to keep scrolling to read about the 2 pandas in quarantine together at Hong Kong zoo...