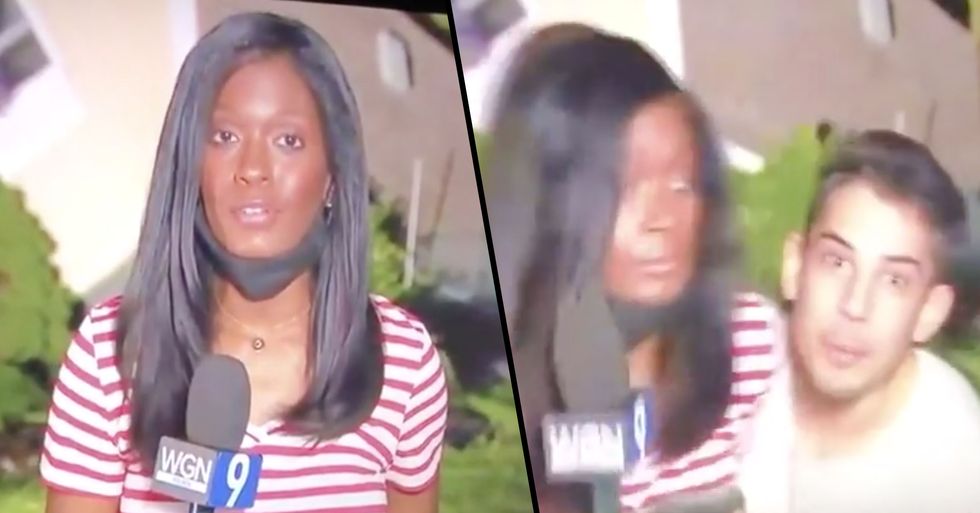 Viewers have been left disgusted after a man grabbed a female reporter live on TV. Now, he has been arrested.

Keep scrolling to watch the horrific incident for yourself...

Instances of people harassing journalists out in the field have been all too common.

From being slapped from behind to fully grabbed - these shocking incidents appear to be happening more often, despite conversations surrounding consent being louder than ever.

But what makes these people think they have a free pass to just grab someone?

It truly makes no sense. Take reporter Alex Bozarjian, for instance, who had her backside slapped by a man in a Savannah, Georgia, running race as she covered the competition back in December. “No woman should EVER have to put up with this at work or anywhere!! Do better," Bozarjian tweeted afterward.  You can watch the shocking incident at the end of this story.

And it seems like once again, another incident has occurred just last weekend.

While live on air, a female reporter was grabbed without consent.

And when the clip was posted to social media...

Well, it wasn't long before a Twitter firestorm ensued.

She was broadcasting for the 10:00 pm newscast on Saturday night. Keep scrolling to see the clip for yourself.

Hall was reporting on the damage the area had endured from a recent windstorm.

However, just before she cut away to a video package, a man appears in the frame.

The man then grabs her around the arms...

Judging by her face, the reporter looks both shocked and terrified by the incident.

And later apologized to viewers for the language while assuring viewers that Hall was “fine."

Not only was his act a complete violation...

But he was not wearing a face covering, potentially exposing Hall to possible infection amid the pandemic.

"A brief note to the young man who jumped in my liveshot tonight: It was not funny. You violated my personal space. You grabbed me. You scared me. Was it worth it?" she wrote.

She urged people to help identify the man in question. "Do you know this guy? He attacked my colleague @gaynor_hall during her liveshot last night in Shorewood. She is physically ok, but this is UNACCEPTABLE!!! He needs to be turned it."

What happened @gaynor_hall is deplorable. And shows a problem with live reporting during a pandemic (and often, any… https://t.co/jlztqp1WtS
— Dave Ross (@Dave Ross)1590291694.0

It's never okay to grab someone without their consent - even if you try and say it was "just a joke."

The clip of the incident quickly went viral on Twitter.

And viewers across the globe expressed their outrage at the incident.

Many said the man was looking for a few seconds of fame.

But there is no way of excusing his behavior.

People were furious at what they had watched.

"Hey kid, that was thoughtless, and demeaning to her and us. You are going to be sorry you harassed her."

Shortly after outraged viewer's demanded the man be found...

Police were able to make an identification.

The man was later identified as twenty-year-old Eric Farina from Minooka, Illinois.

UPDATE!! An arrest has been made in the attack on @gaynor_hall last night during her liveshot. She is physically fi… https://t.co/bjBMisrLxc
— Tonya Francisco (@Tonya Francisco)1590345718.0

Shorewood Police have since confirmed in a statement that he has been arrested and is now facing battery and disorderly conduct charges, WGN-TV reports.

According to the police statement, Farina made a "full confession."

And was released on a $2,500 recognizance bond.

Hall took to Facebook once again to thank viewers for their help and support.

"Thanks to your help, he was identified and arrested. Thank you all so much for your kind words and support. I am ok and I appreciate you more than you know," she wrote.

Police in the area have been praised for their fast response.

@Miller_Dave He’s been arrested! We have a fantastic police department in Shorewood!
— Chitown Buckeye (@Chitown Buckeye)1590351776.0

It's so important that men like him are held accountable for their actions.

You can watch the full clip of the incident below:

His behavior was totally unacceptable. For more on the reporter who had her backside slapped by a man participating in a run, scroll on.