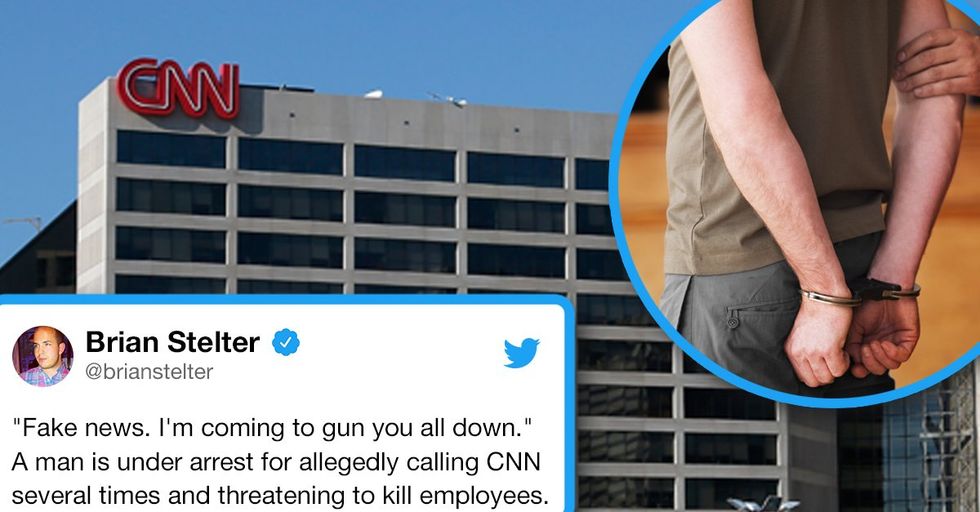 The world just keeps getting scarier and scarier, thanks to Donald Trump.

A Michigan man was recently arrested for threatening to kill CNN employees while yelling about "fake news" — the Trump-coined term for respected newspapers and networks that he thinks are too mean to him.

It's become clearer than ever that Trump's language isn't just childish — it's extremely dangerous. But Trump's tweet after the news of this arrest broke will have you wondering if the guy is remotely aware of the effect he has on people.

A Michigan man was arrested last week after he threatened to shoot and kill employees of CNN.

Brandon Griesemer of Novi, Michigan made 22 calls to CNN headquarters on January 9 and 10, four of which were recorded and contained specific threats to the employees of the news organization.

He specifically threatened to shoot and kill employees at CNN's Atlanta, Georgia headquarters, according to a federal affidavit.

CNN received the first threatening phone call around 3 p.s. on January 9. "Fake news. I'm coming to gun you all down," he said, before cursing and using a racial slur directed at African Americans.

"I am on my way right now to gun the f**king CNN cast down ... I am coming to kill you," he threatened in the second call to CNN.

"I'm smarter than you. More powerful than you. I have more guns than you. More manpower. Your cast is about to get gunned down in a matter of hours," he said in subsequent phone calls. "I am coming to Georgia right now to go to the CNN headquarters to f**king gun every single last one of you."

On January 9, one of CNN's investigators found that the phone number was registered to Griesemer's father. A second number was connected to a wireless account.

The investigator called the second phone number — the person who picked up identified himself as Brandon. The conversation was recorded and the audio was compared with the threatening calls. The voices seemed to match.

The same number was used to make threatening phone calls again on January 10.

Finally, last week, Brandon Griesemer was arrested in connection with the threats and charged with transmitting interstate communications with the intent to extort and threat to injure. Unfortunately, that's not where this story ends.

Back in September, he called an employee at an Islamic center in Ann Arbor, Michigan and made hateful comments about the mosque and Muslims. Officers talked to him that day, and he admitted to making the call. In several calls, he made disparaging comments about Jewish people, African-Americans, and CNN, according to the affidavit.

A metro Detroit man, Brandon, is arrested by the FBI, accused of threatening to massacre employees at CNN, whom he… https://t.co/JzPW6kC9q7
— Niraj Warikoo (@Niraj Warikoo)1516708721.0

Seems fishy, doesn't it? The guy threatened to shoot up a national news office. This reeks of domestic terrorism not being taken seriously because it was a white guy who made the threats. On Monday night, a man who said he was Griesemer's father told The Washington Post that "this whole thing has been a mistake. He really didn't mean any of it. He didn't know what he was saying, the seriousness of it. We're not even gun owners or anything like that. We don't have any, neither does he." Call me crazy, but I don't care if he didn't think what he did was serious.

One person who also doesn't seem to think this incident was too serious is the President of the United States. Here's what Donald Trump tweeted this morning, shortly after the story of Griesemer's arrest broke:

"Crazy Jim Acosta of Fake News CNN" he wrote. The very same "Fake News CNN" that had been threatened a week earlier. Is this irresponsible and inattentive or intentionally disruptive?

Either way, it super sucks.

It was reported yesterday that a man was arrested after allegedly threatening to kill CNN employees, saying, “Fake… https://t.co/E95j0hyxre
— Kalhan (@Kalhan)1516711481.0

And it proves that either Donald Trump is not aware of the holes he's torn in the fabric of our society or he truly doesn't care about what happens to any person who isn't him. I believe it's a combination of both, with an emphasis on the latter.

In short, our president has incited a movement of violence and racism and white supremacy.

He must be held responsible for his actions, just like Brandon Griesemer and every other white guy who thinks they're invincible and can threaten the livelihoods of their fellow citizens without fear of punishment.