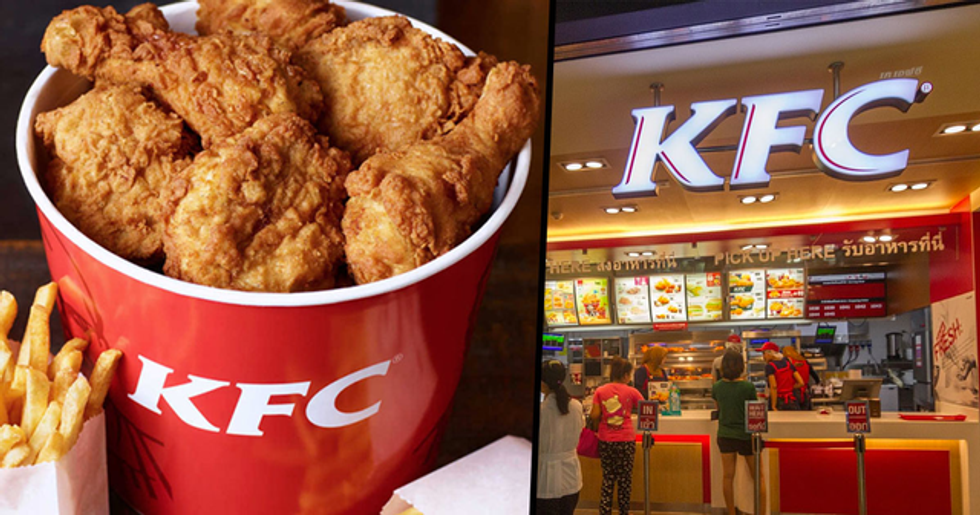 Eating fast food is one of life's little guilty pleasures. The deliciously salty, fatty snacks are sometimes the only thing that'll hit the spot. But what can you do if your fried meal addiction is outside of your budget? Well, one student in South Africa came up with a genius solution to this age-old problem.

Wanting to maintain a constant stream of fried chicken from KFC, he decided that deception would be his best bet. The student, whose identity has been kept anonymous, would turn up to KFC locations dressed in his best business attire to convince staff that he worked for the company and had been sent to perform random quality checks.

Unbelievably, his plan worked - for over a year, the man managed to eat at KFC absolutely free of charge. It's only in recent days that the whole thing tumbled down around him; he was arrested, and the internet had something to say about it!

We all get a little hungry now and then.

And with feelings of hunger can come other negative feelings - grumpiness, anger, moodiness and even upset.

Eating can be more than just satisfying.

Sometimes, chowing down on something that you've really been craving can actually spark genuine joy.

It's hard to deny: eating is fun.

And with such a range of delicious options on offer, there has never been a better time to get snacking.

And there's one food that's pretty much universally adored.

You'd be hard pressed to find someone who doesn't like fried chicken - and with good reason. The stuff is incredibly delicious.

There's just something about it.

Yep, if there's one thing that pretty much everyone can agree on, it has to be fried chicken. It's the world's great unifier.

There's one brand with which fried chicken is almost synonymous.

Kentucky Fried Chicken (or KFC) is undoubtedly the most recognized chicken brand in the world, thanks to their secret combination of herbs and spices.

It's the second biggest fast food chain in the world.

KFC is really responsible for the prevalence of fried chicken in the fast food culture of today - so we have a lot to thank them for!

All that delicious chicken goodness doesn't come free. Maintaining a fried chicken habit can be a pricey pursuit.

But sometimes, a craving is too big to ignore.

When you really want fried chicken, it can seem like nothing else will quite hit the spot.

Which can be a real problem.

If the fried chicken craving hits, but your funds are lacking, then it can feel like a pretty terrible situation.

But what's the solution?

You can't very well just beg KFC to take pity on your cravings and offer you some complimentary fried snacks, can you?

Well, one KFC fan came up with a scheme.

The unnamed student from South Africa decided that there was a method that could get him all the free fried chicken that he desired.

His scheme was pretty ingenious.

He decided to dress up as a businessman and claim to the KFC staff that he was visiting from the head office.

He claimed to be there for one reason.

His "job" was to perform "quality checks" on the fried chicken products. And to do this? Well, he had to try the chicken for free!

He would show up with an ID card providing fake details about his job with the company.

And that's not all!

He also would reportedly show up in fancy cars (including a limousine) to prove that he was the big shot he was claiming to be.

And the plan went pretty well.

For over a year, it seems that the staff were none the wiser to the scheme, and the student enjoyed free KFC food whenever he fancied.

But then, everything fell apart.

The man's deception was discovered - and he has now been arrested for his crime.

South African man arrested for eating at KFC free for a year by saying head office sent him to taste if they are up… https://t.co/DFqiImXq4I
— The African Voice (@The African Voice)1557669984.0

And it really captured the attention of the internet - possibly because it combined two of everyone's favorite things: fried chicken and dastardly plans.

It's safe to say that most had a similar reaction.

The majority of the internet were very proud of this man's genius plan and smart execution, and think that he should be praised.

People think that he shouldn't be punished.

The very fact this man got away with his scheme for over a year is really a source of praise, rather than of criticism.

Many suspect that he'll be just as popular in jail.

After all, this is really a victimless crime - and the kind that almost all of us could get behind.

Many had an alternative idea to jail, though.

Even though this man wasn't technically employed as a taste tester, he's likely now one of the biggest experts on the food.

Many think that this should mean one thing.

Instead of going to prison, he should get the very job that he pretended to have. There's likely no one else more qualified.

It should be the negligent KFC workers that came under fire for the incident, as they were also at fault.

Some were pretty amused.

It is pretty funny to try to imagine a judge and jury taking this case seriously.

And, of course, there were some dad jokes in response to the story.

Including this classic double entendre. The internet is still unsure of the man's eventual fate.

But it seems that some have been inspired by him.

If this scheme worked on one of the biggest fast food chains in the world for over a year, it's surely a pretty good one, after all!