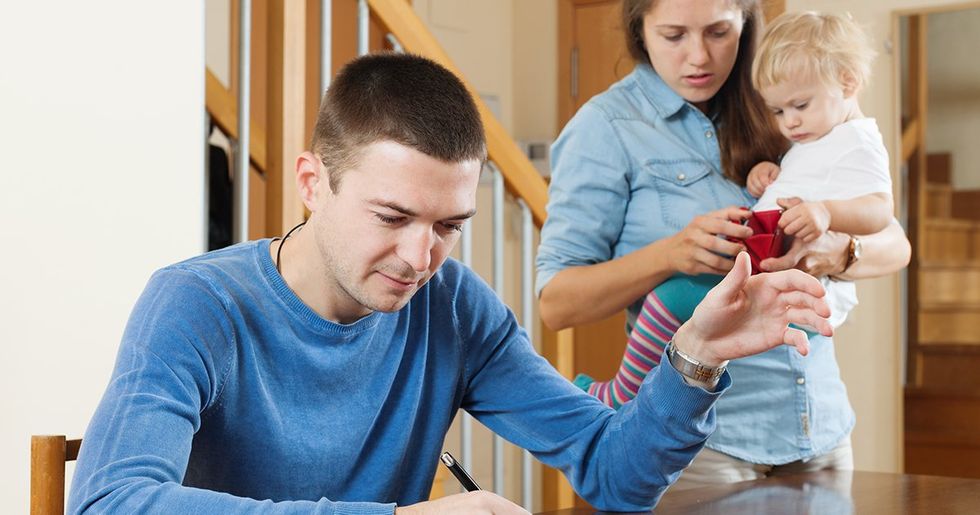 Reddit is good for a lot of different things. There's a reason it's such a popular site, after all. Turns out, one of those things is figuring out whether you're a class-A jerk or not!

Because yeah, there's a whole subreddit dedicated to that subject called Am I the A**hole. Every post there begins with "AITA" (am I the a**hole), followed by whatever issue the Redditor is grappling with. From there, everybody else on the thread chimes in and tells the Redditor if they're being a schmuck!

So it was the perfect place for one guy to ask a genuinely blockheaded question. He wanted to know if he was a jerk for thinking his wife should pay for the baby formula by herself. And the internet was quick to assure him--in hilarious ways--that he was, indeed, the a**hole. Check out these fantastic responses!

Reddit is apparently the perfect place to go when you're not sure if you're in the right.

Because Reddit's Am I the A**hole subreddit is just teeming with questions, both reasonable and moronic!

Some issues have a little more nuance.

After all, sometimes all parties involved are being unfair. And sometimes nobody is 'wrong,' it's all a matter of perspective.

Plenty of people have been dubbed 'NTA.'

Which, of course, stands for 'not the a**hole.'

Because that's how the subreddit works.

One redditor posts their question, and then everybody else weighs in and decides whether or not they're the jerk, and why.

And some of the questions are absolutely 'NTA.'

Dealing with a daughter's alarmingly controlling boyfriend and boyfriend's mother? Have a significant other or family member who displays racist/sexist behaviors and unsure if walking away from them makes you in the wrong? Plenty of those questions fill up this subreddit, and they make up some of the many officially 'NTA' posts there.

But we've also stuff from the opposite side.

Because this is 'AITA.' So yeah, there's gonna be some real dunces in the mix. And those posts are dubbed 'YTA' - you're the a**hole.

And recently, Twitter uncovered a first-rate example of a 'YTA.'

Written by a guy who didn't want to pay for his own baby's formula. Read the whole post! It gets even better (worse).

Yep, this guy's wife wanted to stop breastfeeding "for basically no reason," so he felt she should pay to, you know, keep the baby fed and healthy.

Let's talk about that.

Because women stop breastfeeding (or don't at all) for plenty of reasons. It's recommended that babies are breastfed exclusively for the first six months, and breastfed while also introducing solids for the first year. But not every mother is the same.

So why do they stop?

The top reasons for women to stop breastfeeding are reported as pain, work, low milk volume, illness, and lack of support.

Long story short: yeah, breastmilk is the best for babies.

But the women making it can only take so much in their lives and still be expected to produce breastmilk. Jobs, stress, illness, lack of resources...all those things can make continually supplying milk for a year too much for a woman.

This mother already got the first 6 months down.

And now she's ready to stop. Seems reasonable. Sure, she doesn't have a problem with production, but...hmm...what's that 'lack of support' I see on that list? Or maybe pain?

Ultimately, it's her call.

Because her body is the one doing the heavy lifting, so she's probably the most qualified one to know when her body is saying 'enough, already!'

Not that this guy was getting any of that.

Seems like he was more interested in saving money by having his wife pump her own breastmilk (or pay for her own formula) as long as possible, TBH.

That's an upsetting level of cheap.

Sure, sure, the budget is tight. But dude, feed your dang baby! He's a parent, too. That means he's as responsible for the baby's welfare as his wife. And he hasn't been the one pumping milk out of his own body for 6 months!

So here's what everyone else is saying.

If this is real, holy crap are YTA. Both of you should be equally financially invested in your shared baby. If anything formula should come exclusively from your budget for the next 6 months and then you can switch to 50/50 since she was the one saving your family the cost of formula by breastfeeding for half a year. -DarthCharizard

She also housed and fed the baby in the womb, so tack on 9 more months, plus rent. -SoMuchMoreEagle

The 'YTA' declaration was quite unanimous.

YTA. She can’t keep breastfeeding indefinitely. She’s most likely sore and in pain. Is the food for the baby once it’s on solid food also going to come from her spending or from the family groceries? -Jthepunk

Also, if your food budget is THAT TIGHT why the heck did you have a kid. Were you expecting her to breastfeed until it got a job? -CopperHibiscus

What's more important, your wife and baby's health, or your budget?

Breastfeeding is hard work and exhausting and so many women struggle with it, and she's already been doing this for six months! ITS ALSO YOUR BABY. Are you going to make baby food and all the children's snacks come from your wife's budget as well?

Women get so much pressure over breastfeeding for health reasons and for the baby's immune system etc., Your rationale for making your wife breastfeed for budgeting reasons makes you extra a**hole. -glassfury

Some solutions were a little more simplistic than others.

I mean, it is still a solution!

When will the baby start paying its way?

Typical baby, wanting a handout. It's already been in the world for six months, it's ready to go get a job!

@Nicole_Cliffe The good news is that his grocery budget will be way lower when she tosses him out of the house and… https://t.co/lrWXXv1Ge6
— Carolyn Cote (@Carolyn Cote)1553548149.0

If she did, this may very well be the case!

This is the real tea.

Yeah, maybe don't tell your wife that she's solely responsible for feeding the baby you have together.

This word cloud is amazing:

And very telling of what the people who read that man's post overwhelmingly think of it!

Other people felt like they'd heard this story before.

@collectdust Sounds like my ex-BIL, who still doesn’t understand why my sister divorced him
— Holly Nicole (@Holly Nicole)1553548960.0

Yeah, it's got the same kind of energy.

And some found themselves empathizing with the wife.

Really, though. Sharing a kid with someone before finding out about their unfair expectations is...a lot.

One person suggested a straight-up invoice.

@collectdust She should invoice him for the hours spent nursing / pumping and take that out of his budget.
— all hallows' lex (@all hallows' lex)1553547999.0

Well, it is the clearest and most concise way for the wife to make sure she's compensated for all this nonsense!

Or maybe just do this:

So let's hope this mysterious redditor got the message.