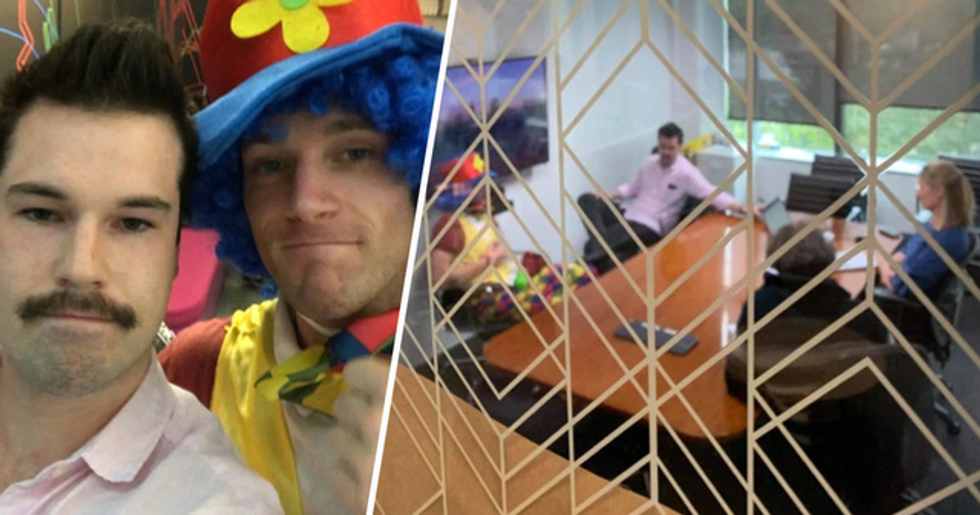 If you knew that you were about to be fired, what would you do? One man in New Zealand had an absolutely hilarious answer to that very question this week. Joshua Jack, an Aukland native, sensed that his time with his company was coming to an end after he received an email from his bosses. In order to break the tension, he decided to hire a clown to act as emotional support and provide the meeting with some much-needed comic relief.

It turned out Jack was in the firing line, and so his $200 investment in keeping the meeting fun was at least much-needed. The clown reportedly added a hint of humor to the otherwise sad occasion - and the internet can't get enough.

Getting fired is always a frightening prospect.

But if we already knew that it was going to happen, some of us may already have contingency plans to go out with a bang.

Many of us would probably respond emotionally.

And it's true, the idea of carrying on without a steady income (alongside being told that you're not good enough) is never a particularly fun event.

The redundancy meeting is never a good time.

Sitting there while it's explained that you aren't good at your job and can't be kept on isn't just depressing - it's awkward, too.

But what if you could change all of that?

One man from Aukland, New Zealand, had an innovative scheme to make his eventual firing seem that little bit more fun.

Joshua Jack felt like his firing was on the horizon.

And so he came up with a pretty unique way to make the whole process go with a swing. His method? Well, he hired an emotional support clown, of course!

This is Joshua Jackson.

Until very recently he was working at an advertising agency in Aukland - but he also pursues his dream of being a professional comedian. And, after this, it looks like he may be getting closer.

He was interviewed by Magic Radio about his harebrained scheme.

He said that he received an email from his bosses, and immediately assumed the worst.

Suspecting that his days were numbered ...

Jack responded to the email, drawing attention to one aspect in particular - the part that claimed that he would be allowed to bring emotional support in with him.

While this usually refers to a friend, coworker, or dog ...

Jack chose to think outside of the box instead. He decided to spring a whopping $200 and hired an emotional support clown.

"I thought it was best to bring in a professional," he joked.

Here are the two of them together. We have to say, it'd be pretty hard to take the meeting too seriously with these two staring back at you.

Images of the meeting went viral.

There's something delightfully surreal about seeing a serious meeting going down while a clown attempts what must be the most awkward performance of their life.

While many suspected that Jack's employers may not be pleased ...

Jack claims that his bosses were surprisingly happy that he'd tried to “spice up the meeting" and “could see the humorous side."

Wondering exactly what the clown got up to in the meeting?

Well, apparently, his performance was very expressive - including miming sobbing as the redundancy papers were passed over to Jack.

That's not all he did, either.

The clown also spent his time during the meeting creating intricate balloon animals for Jack and his bosses. "It was sort of noisy, him making balloon animals, so we did have to tell him to be quiet from time to time."

Apparently, the clown didn't interrupt the meeting too much.

"They were getting a free service and also getting the entertainment from Joe the clown," Jack explained.

Apparently, the clown found the event "a touch unusual."

But Jack rated his performance in spite of slightly odd circumstances, claiming that he was "overall, supportive."

“I definitely recommend bringing Joe or another clown. Highly recommended."

But if you want to fine-tune the experience?

The clown made two animals at a slow, quiet pace, making each of them cost about $100.

The internet has gone wild for this story.

What's scarier? Getting fired? Or firing someone who has brought along an emotional support clown? @realevilhrlady… https://t.co/b1RHvTzLU0
— Suzanne Lucas (@Suzanne Lucas)1568630291.0

One Twitter user commented that one sure way to mitigate the fear-factor of being fired is to scare your employers right back.

But the overriding reaction is this.

Twitter users around the world are reading the story and asking themselves, "why didn't we think of that?" Want another story of an employee making life difficult for their boss? Keep on scrolling.