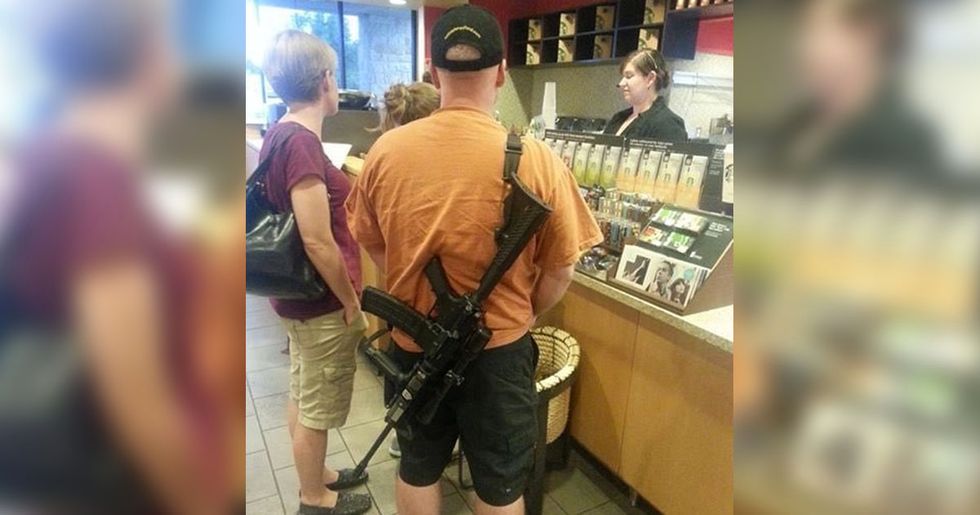 Now, we can all feel a bit crabby before our morning coffee...

This morning, I actually popped into a Starbucks on the way to work. With my pre-coffee brain whirring away, I remember being irritated for two reasons: the ludicrous price of a skinny muffin and the size of the line. But if I had looked up to see that the guy in front of me had an assault rifle slung across his back, I wouldn't have been irritated; I would have been scared. Why am I telling you this? Because an old photo of a guy casually wearing an assault rifle in a Starbucks branch has resurfaced on Twitter this week.

There is never a cease-fire on the conversation about gun control and with the shootings that happened in Ohio and Texas last weekend, the debate as to why regular civilians are allowed to buy guns, and are allowed to walk into a Starbucks with a gun on their backs, battles on.

The reason that this conversation is in a stalemate is that people just don't agree.

I can hold my hands up and say that I would feel safer if guns were banned. Saying that, I know that there are people out there who feel safer having guns. So what can you do?

Well, I mean, really, all we can do right now is fire out our divisive opinions on Twitter. Many people have done this, and I have collated a thread of some of the best, some of the worst, and some of the downright ludicrous responses to the resurfaced pic that I came across.

"What do you mean you don't have any caramel syrup?!"

It just looks so threatening, doesn't it?

Charlie Sykes asked the question: How would you feel?

Charlie Sykes, a political commentator, made a political comment (hehe) on Twitter when he raised the question of gun control. Taking an old picture of a guy standing in a Starbucks with an assault rifle, he asked his followers what they would do if they saw such a thing. Would it make them feel safer, or less safe? Theresa makes a good point. Surely you're safer away from a gun than near one, right?

"Berzeker Builds Bridges Not Walls" seems to think that the assault rifle owner has no intention of using his rifle, and that it must just be a fashion statement. Kinda like the way that my dad thinks it's cool to only wear one of his backpack straps, even though it's better for you to distribute the weight across your back by using both straps, right? Yeah, I mean, I guess it's a bit like that... only with a weapon that could murder everyone in the store within a matter of moments.

You, sir, are such a stereotype...

Why is it always chubby pale white dudes getting photographed ordering a Frappuccino at Starbucks with an assault r… https://t.co/lZ6nrjDFdt
— Thornton McEnery (@Thornton McEnery)1565281092.0

So it's America's fault?

Well done, America. That this guy feels he needs an assault rifle/killing machine is one thing. That he feels he ha… https://t.co/CF47VCNnTg
— Andy Campbell (@Andy Campbell)1565269634.0

I mean, alright, blame America for having terrible gun control which means that, in some states, people are allowed to walk around with rifles like this - but blaming America because the man must feel so scared that he has to take his rifle to Starbucks? White guys really do get away with everything.

That's the point though isn't it, how are we supposed to know that he isn't a threat?

I'm sorry to say - dead kids is the price we are currently paying for white men with insecurities and ego problems… https://t.co/ybNVEAOyEA
— The Hummingbird 🐦 (@The Hummingbird 🐦)1565049071.0

"Oh, what? This assault rifle? No, that's for my protection. And yours, little girl? No, you don't need to fear me, I'm a good guy." Give me strength.

A picture of privilege.

@SaysHummingbird Can you imagine if that was a woman in a hijab carrying a rifle over her shoulder? This is a picture of privilege.
— Douglas ☀️ (@Douglas ☀️)1565050586.0

Many twitter users vocalized the privilege of the rifle-carrier in that, as a white man, he can go wherever he pleases (even to a Starbucks) with a weapon on show. If he had been a person of color, a Muslim, or someone that fitted the media's image of a terrorist, on the other hand, he'd have been arrested - and probably shot.

If a twelve-year-old black boy plays with a plastic toy gun, he gets shot. But when a middle-aged white man brandishes a real assault rifle in a Starbucks, the police aren't even called. Yeah, makes sense.

Many questioned why the assault rifle was necessary...

Making up for something, eh?

The bigger the gun...

The smaller the package? As this piece of art nicely demonstrates.

Some people don't think that there's anything wrong with taking an assault rifle to Starbucks.

Derek Schwartz doesn't think that the man was doing anything wrong and accuses anyone who would be scared in this situation of being racist. From the discussions, it seems like there is a distinct difference in opinions between those that own, and/or have used, guns and those that don't. Schwartz is ex-Navy and has probably seen plenty of assault rifles in his time; he might even own one himself. I guess that's the trouble with politics. If you ask rich people to pay a lot of tax, they won't be on your side. If you ask a gun owner to get rid of his gun, he won't back you.

What a time to be alive!

being scared of a white man carrying a loaded assault rifle on his back in a Starbucks makes you racist. what a tim… https://t.co/ifdsapIf8A
— abby uzumaki 🍥 (@abby uzumaki 🍥)1565241829.0

Abby makes the point that being scared of someone carrying an assault rifle doesn't warrant being called a racist. A weapon that could kill you worn by a total stranger who may or may not intend to open fire surely should be a cause for concern.

Growing up in Texas.

According to Kam, who grew up in Texas, seeing people with a gun is pretty normal, but even she admits that a rifle of this size is a bit on the large side. Can't exactly be comfortable carrying around a rifle of that size, can it?

A British woman called Lizzy claimed that seeing anyone with a gun scares her.

Which led to a guy feeling the need to explain to her what a police officer is and why they might carry a gun - great. If only there were as many women womansplaining why having no gun control (and having all officers carrying guns) means that more innocent people get shot.

As Grim Kardashian points out, NYC has strict gun controls, which means that there is less crime and people feel safer.

Not that everyone agrees...

George Aiello disputes that NYC is safer and goes on to say that you are able to carry a gun in NYC. To which "grim Kardashian" replies: "concealed carry licenses issued in ny state (may issue) are not recognized in nyc limits unless validated by the police commissioner after a 6-12 month process. NEXT." So you can't just walk into a Walmart, buy a rifle, and take it to the nearest Starbucks to impress the cute waitress? Wow.

Maybe he was going hunting?

Some twitter users raised the perfectly valid point that the guy carrying the rifle might have been going hunting. Obviously, hunting is one reason that a rifle is necessary (I guess...). But, I mean, come on. Can't you leave your rifle in a locked box in your locked vehicle whilst you go into Starbucks for your hot beverage? I'm sure, even if we can't agree on gun control, we can agree on that.

Turns out, these Twitter users aren't the only ones worried about random shootings.

Tourists from countries such as Uruguay and China are being warned to be on the lookout when traveling to the U.S. to avoid being caught up in a random shooting. Keep reading for more on that.