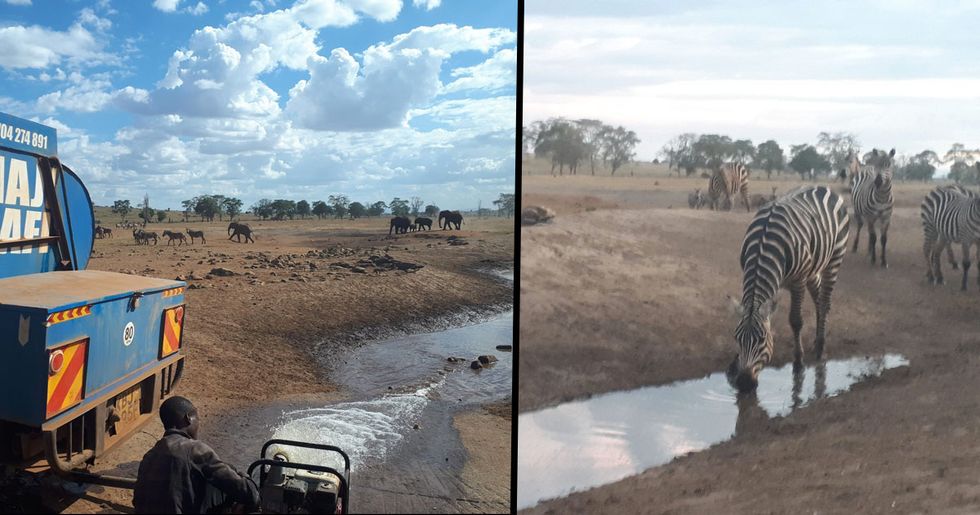 In a world that seems to be falling apart at the seams, it’s hard to see any kind of silver lining. The ice caps are melting, sea temperatures are rising and droughts, freak storms and floods are becoming more and more frequent. But, occasionally, a story can re-establish one’s faith in the kindness and conscientiousness of humankind. This is one such story.

Patrick Killonzo Mwalua, a pea farmer from Kenya, decided to confront an extreme water shortage in his local national park and has since taken it upon himself to rehydrate the watering holes. Almost every day, Patrick drives in thousands of liters of water so that the animals of Tsavo West National Park can get something to drink.

Patrick told Dodo in 2017, "There is completely no water, so the animals are depending on humans. If we don't help them, they will die."

And it wasn’t just Tsavo West that was suffering

All across Kenya, thanks to the effects of climate change, drought has hit a number of national parks with a vengeance.

This means animals either have to perish, or walk hundreds of miles in search of water.

This causes a seismic disruption to the ecosystem

The watering hole is a cornerstone of the fragile Tsavo ecosystem. Predators use the watering hole both in order to hunt and drink - drought causes the food chain to collapse.

The drought goes back a long way

On 10th February 2014, the Kenyan government declared a national emergency drought, effecting over half of Kenya’s counties, with March - May rains way under the average.

And it’s not just the animals that are effected

Maize production in coastal areas is said to have decreased by 99% below the long term average. And more than 2.6 million Kenyans were severely food insecure as of 26 May 2017 — and this number is rapidly rising.

Families, like the animals of Kenya's national parks, are on the move.

With no sustainable source of food, families are forced to move from place to place, looking for something reliable.

This nomadic lifestyle poses huge risks to women and children

With children moving from place to place to find food, they don’t receive proper schooling. And travelling women are more at risk of victimisation.

At the heart of all this chaos, lives Patrick - an animal lover.

“I was born around here and grew up with wildlife and got a lot of passion about wildlife. I decided to bring awareness to this so when they grow up they can protect their wildlife."

But this didn’t all happen immediately, the operation’s pretty complicated and has had a few set-backs such as…

Do you know how much water an adult elephant drinks? A lot… Around fifty gallons a day according to google. Patrick was going to have to find a lot of water.

Then there’s the problem of how to maintain the watering hole.

You can’t just pour the water anywhere, you have to make something called a ‘pan’. A good ‘pan’ won’t contaminate the clean water and will hold it for a long time.

And you have to be careful with the animals.

Animals, especially big ones, can be dangerous. And they can also scare easily. It's no use doing all the good work just to frighten an ibex.

Then there’s that green

To pull off something like this, you need money. And quite a lot of it.

But, amazingly, he did it, all of it.

Somehow Patrick seemed to circumvent all of these hardships. Let me take you through it.

The money problem was going to take some ingenuity, and none of the rest of the work could start without it being solved.

So Patrick called for donations

And people donated. A lot of people. Here’s his video calling for contributions.

Using the money from donations, Patrick could enlist the help of an enormous 10,000 litre water truck - it’s since been dubbed his ‘truck of hope’.

Patrick worked with construction and conservation experts to make sure his ‘pan’ was suitable to hold the water and keep it safe to drink.

Tending to the animals

Patrick is a wildlife expert and could train his colleagues how best to interact with the animals at the park.

Now the thirsty animals get more than enough to drink

With round the clock trips to establish new ‘pans’ and maintain existing ones.

Patrick is now the proud owner of two different ‘trucks of hope’ - imagine that!

He has people that fly thousands of miles to help him.

Here’s him with a ‘lady from the USA’ who flew over to help.

People even paid for him to have surgery

A real messiah, people want to preserve his good work - in this case, his good kidney…

He’s been recognised and honoured from the top

Here he is receiving an honour from none other than the president of Kenya for his work in the drought.

He works with children

Patrick makes appearances at schools to teach children about the merits of conservation and nature.

Even the buffalo know him

'Patrick Killonzo Mwalua shared one occasion where 500 buffalos were waiting for him at the watering hole where he usually releases the water, he added that the buffalos were desperate to drink something.'

Here’s a video of Patrick’s work that aired in Germany.

So maybe the world isn’t so bad.

No. It is bad. It’s terrible actually. But we all need to be more like Patrick if we’re going to do something about it.

Here’s how you give Patrick some money.