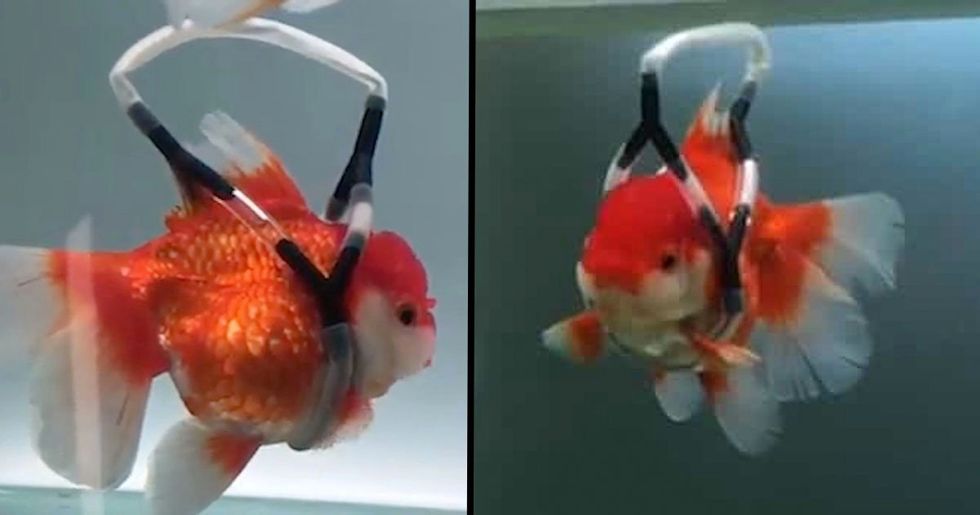 One dude from Seoul has invented a nifty wheelchair-type device to keep his topsy-turvy goldfish from turning the wrong way and drowning from the water that would inevitably flood into the pockets of his teeny fins. What a guy!

Strap yourself in for the cutest story to hit the internet today...

What's up with his fish?

Let's start with what's up with the goldfish. The fish in question is suffering from "swimbladder disease."

Many goldfish are susceptible to the disease. Perhaps you've had a goldfish turn-upside down and die? Sadly, it's an untreatable condition, but there are remedies to prolong the life of your pet.

There are plenty of suggestions online about what to do when swimbladder disease strikes.

As the condition affects (you guessed it) the bladder of the goldfish, most of the remedies to relieve pain and prolong the life of the doomed goldfish involve changing what it consumes.

Well, that's what my goldfish always ate, but, apparently, you can feed goldfish all sorts of things - and if your fishy friend starts floating up-side-down, you really oughta figure out what it needs.

Actually, those floating flakes can cause swimbladder disease...

Fish foods that contain air like floating flakes, floating pellets, or whatever other floating fish food things that they have on the market, muck up the buoyancy of the goldfish.

As cute as it is watching goldfish come to the surface to eat...

You could be killing your beloved/benevolent pet. I mean, can you really love a goldfish? Hey, I'm not judging... if anything, I'm jealous. I wish that I could be as passionate about such a relatively-easy-to-look-after-pet.

The most vulnerable goldfish to the disease are Fancy Goldfish.

"There's no class when it comes to goldfish!" Alright, simmer down. To anyone thinking that I'm being goldfish classist - this is just what this particular breed of goldfish is called.

Is my goldfish a fancy one?

Fancy goldfish are the ones that have double tail fins and short, fat bodies. These poor guys are already born with a bent bladder, so getting fed a load of air can leave them inevitably suffering from swimbladder disease.

A dirty fish tank can also cause the condition.

That's right, I'm talking to you! Just kidding, I don't know you or the state of the water in your fish tank...

Aside from switching out the food that you give your lil' fishy, the experts recommend adding a little salt to the water; this can help to clean out the fish's digestive system - just like how humans gargle with salt water when their throats have gone all nasty.

These remedies won't cure the condition, though.

You can feed your goldfish the fanciest stinkin' fish food in all the land, you can pour a whole catering-sized tub (wouldn't recommend) amount of salt into its tank and its topsy turvy condition will still take the life of your fishy friend.

Henry Kim fought the inevitable and invented a solution.

Kim, thirty-two, of Seoul, South Korea, is someone that really does care about his goldfish.

You could say that he's a goldfish enthusiast...

Henry Kim has over twenty goldfish and spreads them out between three aquariums.

After repeatedly witnessing the effect of swimbladder, Kim took action.

Kim, who works as a fashion designer, said: "Swim bladder disorder can be caused by many reasons such as overeating or unclean waters. I normally find it in fish that have been imported to Korea from Thailand or China."

Check out his device in action...

After researching possible buoyancy techniques on Google, and after creating a few test products, Kim succeeded in making a device that he describes as "a wheelchair." Pleased with the success of his invention, he said: "Fish with this issue only live a couple of months, but thanks to this device, one of my fish has lived to be five months old. My wheelchair helps them stay afloat and have a longer life." Can Henry Kim come and keep me afloat?